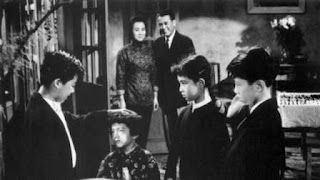 Chinese film has social conscience. The Great Devotion (可憐天下父母心) was a huge hit because it showed the lives of an ordinary family in Hong Kong in the 1950's. Chan Chi-hong (Cheung Wood-yau 張活游) and his wife Lee Yuk-mei,  the incomparable Pak Yin (白燕) celebrate the Lunar New Year with a huge plum blossom tree that costs HK$25. Chan's a schoolteacher, prestigious job, but he only earns $45 so it's an extravagance. But plum trees represent hope for the future, so it's OK. Guests arrive, everyone's happy.

Already there are hints of darker reality. One of the guests is Lam Lo See (old master Lam) an educated man now reduced to living in a muk uk (wooden shack) in a shanty. Then  Chan loses his job. No education system then, schools were unregulated and unsupported and failed like businesses do. Social security? Hong Kong in the 1950's? Forget it. The family live in shared communal apartments as people did then, but because the tenants can't keep up the rent, the owner shuts off the water supply. Since water was only on for four hours every four days during the emergency restrictions of the late 50's, that was serious. Lee goes to her rich cousin who's having a soiree in a mansion. No help there, of course.

Watch this film and understand what filial piety really means. When the family has to pawn their blankets, the parents wrap the kids in a threadbare sheet. But the kids put on all the clothes they have so the parents won't freeze. "If anything happens to you, Dad and Mum, we kids are lost anyway". In times of trouble, the family fall back on relationship systems. Saam sum (Third Aunt - the doughty Lee Yuet-ching 李月清) arrives from the country with rice, which is pretty noble considering there were famines in China. But people share when they have, when they can. Two comic relatives, who are labourers, not literati like Chan, also help. Moral obligations, even to those you don't know. Chan gets a job offer but turns it down because it will deprive someone in even greater distress than he.

The kids hatch a plan to beg for money in the streets, but ask the wrong man - it's Dad! They get smacked with a feather duster. Begging then was life or death, not something to be done casually. One day, Dad sees a crowd, They're looking at Old Master Lam, now a street sleeper, his literary talent now reduced to writting begging notes on cardboard scarps. Both Chan and Lam are mortified.

Saam sum comes to adopt elder daughter so she can be raised in the country, easing the burden on her parents. At the farewell dinner, mother gives daughter a salt egg - special treat - but youngest daughter grabs it. Eldest daughter is Lee Oi-ming, superb actress but youngest steals the show - she's Fung Bo Bo, aged 3, who went on to be a mega star. Better to keep the family together, says Saam Sum, unity better than material gain.

The new baby dies and the family is forced to borrow from triads who charge extortionate rates and beat Dad up because he can't pay. By now, he's contracted TB which was endemic then, and thinks he'is going to die. Humiliated because he can't support his family, he disappears to committ suicide but can't face it. As Mother says, it's not fair on the family, if he dies, they all do. Chan's friend, the idealistic young teacher Gwok-hung, has turned to crime in desperation. He stands on a parapet, ready to jump, but his long lost mother appears. She's a prostitute. "If you're ashamed", says mother, "how do you think I feel? " She did it to put him through school and have a better life than she had. "If you're going to die, I will too!" Again the theme of communal reciprocity.

Then, by a miracle, the novel Chan had written earlier is published and sells so well, the family's fortunes are reversed. The cycle of luck and disaster turns again. In Hong Kong people,lived constantly on the edge, knowing reversal could happen at any time. Materialistic hedonism, driven by extreme anxiety, born of tough experience. Free public education, health, housing, things people take for granted now, didn't exist then. It's quite a miracle when you think it about it. That dynamism that's so much a part of Cantonese culture made it possible. When you watch this movie, you understand Hong Kong and Cantonese values. The Chinese movie industry had a moral conscience right from the start. Of course many movies were pure escapism, but film makers often dealt with social issues. It's a western myth that Hong Kong was "apolitical". Peopledidn't agitate, but they didn't stop thinking. A different form of political action, than in the west.

Pak Yin (1920-87) was one of the biggest stars of the time, specializing in morally courageous characters as well as in the usual beauties and maidens. Such a strong, mature personality, even in more sentimental movies. One of my childhood role models. Despite her wealth and busy career, she produced this movie herself.  I think her character shines through in this movie. (the photo shows Pak Yin with Fung Bo Bo in the mid 60's). Significantly Great Devotion  launched the writing and directing career of the prolific Chor Yuen (楚原). Here, he's also the actor who plays Gwok-hung, whose fortunes parrallel those of the Chan family.

Although Great Devotion is a melodrama, it is a film that should be studied, because it says so much about Hong Kong in the 1950's, and indeed, the whole experience of displaced communities struggling to surviuve in difficult situations. It ought to be a classic of world cinema.  It's available on DVD, pops up on HK TV and "other sources" (Youtube) and it's wonderful to hear Cantonese spoken so clearly. But it needs subtitles to reach the international market. Nonetheless it's so vividly filmed you can follow it visually. For example, the kids do a dragon dance at New Year. Then when they have to move to poorer housing, they re-enact the dance with furniture. Plum blossom appears at critical junctures, symbolizing spring and optimism. Superlative acting, even though many of the cast pop up in many different movies.(The industry was intensive, some movies made with 3 week turnover),  Here, they all seem to be doing their best work as if they known that this isn't the usual potboiler. Great clips of early Hong Kong and Kwong Wah Hospital. Historic material!
at June 19, 2011