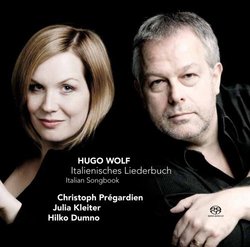 Hugo Wolf and Gustav Mahler had their 150th birthday anniversaries last year. Torrents of Mahler, much of it Mahlerkugeln, spoiling his reputation. Hugo Wolf, on the other hand, wasn't a victim of fashion. Fewer performances but generally high quality. This recording of Wolf's Italienisches Liederbuch with Christoph Prégardien stands out, because it offers such insight into the true greatness of Wolf's music.

Prégardien has been singing Wolf for decades. Experience does make a difference. Prégardien has lived with Wolf's music so long that he brings to this recording a real sense of understanding of the composer's work as a whole, not just the piece in question. Wolf's idiom is so unique that he can't really be sung "straight" without a feel for how his creative processes worked.

This disc is unique, too, because Prégardien eschews the usual order of songs, put together by Wolf's publisher, not by Wolf himself. Instead, Prégardien rearranges the order to emphasize shifts in mood and meaning. It brings out an inner logic, so the collection flows with a greater sense of structure. Above all, it brings out the inherent human drama. Lovers meet, flirt salaciously as well as chastely, have spats, get thwarted by others and reconcile, enhanced by love. Yet by no means is this narrative. There aren't even identifiable pairs of lovers. Rather, Prégardien's Italienisches Liederbuch is like a panorama where many different personalities float in and out in vivid, impressionistic sequence.

Each of Wolf's songs - not just in this collection - are like operas distilled in miniature. It's like he's channelling multitudes of human experience. He writes intuitively, rather than through fixed organization, so you glory in the sheer diversity of personas that inhabit his music. This recording is seriously important for anyone who really wants to appreciate Wolf on a deeper level. Prégardien brings such insights that you need this recording for this reason alone.

I first heard Prégardien sings his "special" Italienisches Liederbuch at the Wigmore Hall around 1995. I can't remember the exact order, but it was along the lines in this disc. The soprano then was Juliane Banse. The chemistry between Prégardien and Banse was so powerful, that it was like hearing real lovers act out through the camouflage of song. Prégardien is excellent on this recording. Since he's stopped smoking, (so I've heard) his voice is mellifluous, but with extra depth and pungency, which suits Wolf's music extremely well. Some of these songs aren't Romantic at all, but erotic and borderline indecent. Fischer-Dieskau was noble, but wit, particularly salt of the earth, didn't come naturally to him.  Moreover, these songs need the flexible sparkle that a tenor can bring. Take them with too much baritonal gravitas, and they don't fly.

The singer on this recording is Julia Kleiter and the pianist Hilko Dumno. Kleiter has considerable experience in opera and in recital, and comes from Limburg, as Prégardien does. Perhaps this makes for the cosiness of their ensemble, which is a very good thing, since it's central to the dynamic of these songs. While she's not in Prégardien's league, she's good enough, and infinitely better than Mojca Erdmann, paired with Christian Gerhaher on the Wolf Italienisches Liederbuch recording which came out 4 months after Prégardien and Kleiter.

Hands down, Prégardien is the better choice. I've heard Gerhaher and Erdmann live too (also Wigmore Hall). His CD will please his fans though fans of Wolf  might be less moved. Prégardien is a much more inward singer, and reaches depths Gerhaher can't come near, lovely as the sounds he makes. Gerhaher's pianist, Gerold Huber is better but his soprano lets him down. Without a decent soprano, there's no sense of interaction. Arguably, Wolf's better songs are written for male voice, but Kleiter at least hold her own. It's a pity that Prégardien is recorded on Channel Classics, a small budget label, while Gerhaher has the more sophisticated RCA. It's obvious where the marketing muscle will be. But if you're after good interpretation, good singing and Hugo Wolf, stick to Prégardien. My biggest regret is that this wasn't recorded earlier by an upmarket label. With better support all round, Prégardien would give Schwarzkopf/DFD and Schreier/Lott serious competition.
at June 01, 2011