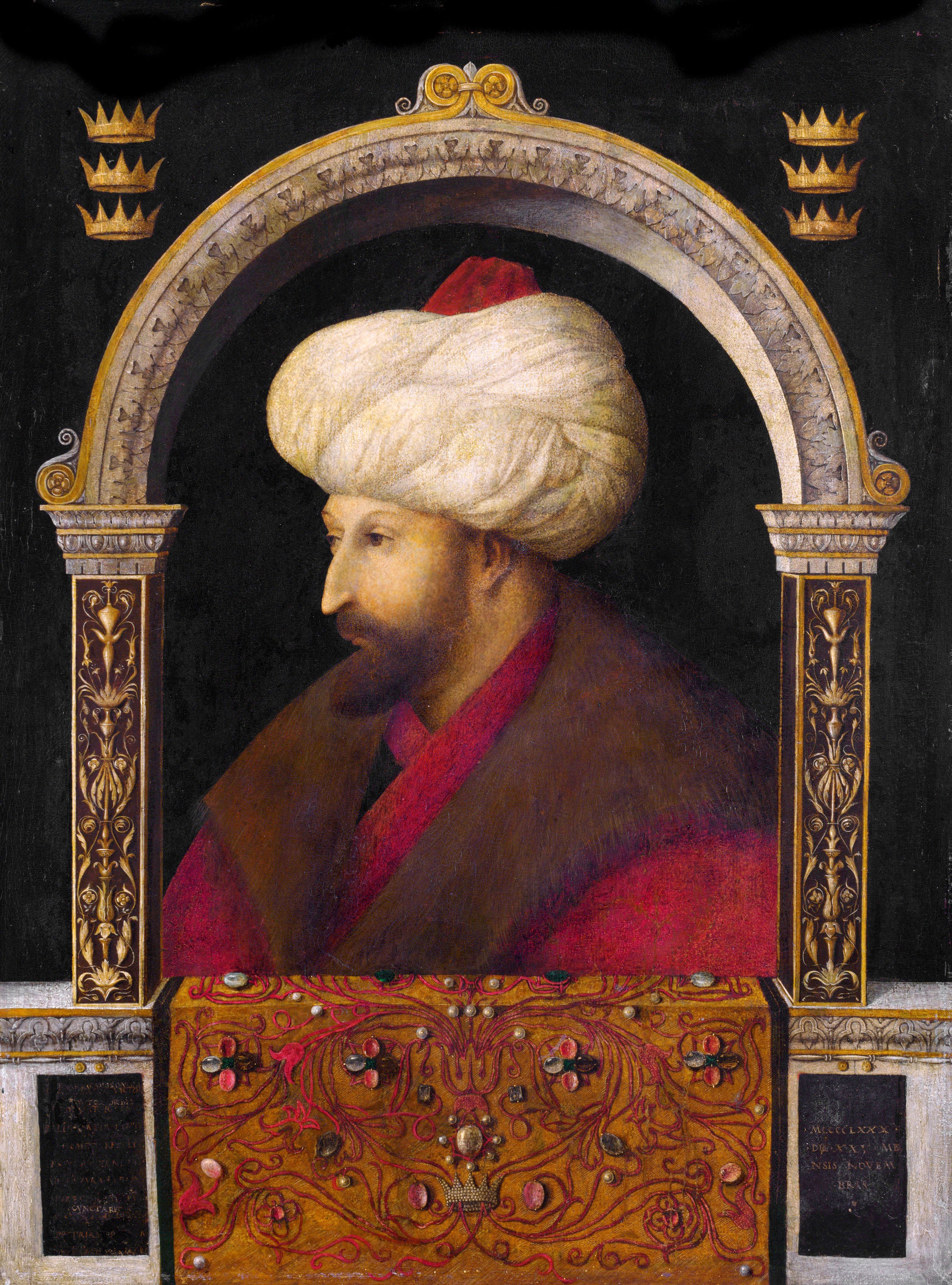 Another Rossini Turk in Italy! Rossini Maometto Secondo, or Mehmet II (1432-1481) Fatih Sultan of the Ottomans, who took Constantinople, and ended the Byzantine Empire. Next ambitious plan: to conquer Rome, thereby linking Europe and Asia under Islam. Mega geopolitics. Venice was the front line because Venetians traded throughout the Eastern Mediterranean. For Venetians, Turks posed a genuine threat to survival. This Turk was no buffo.

Perhaps that's why Rossini's Maometto Secondo flopped in Naples in 1820 but was a hit in Venice in 1822. Although the opera fell out of the repertoire, it's come back into favour now that European and Islamic nations reassess their relationship.  Rossini with political depth? Surprisingly, yes, for he treats his characters as individuals rather than cardboard stereotypes. Paolo Erisso is chief of the Venetian outpost at Negroponte in Greece. It's besieged and finally taken by the Turks. Oddly enough, Erisso's daughter, Anna, has a secret lover whose identity she doesn't know. Guess who? Maometto, himself, whom she recognizes when the defeated Venetians are rounded up. Maometto loves Anna so much that he pardons Erisso and gives Anna his official seal to keep her safe when he has to go back into battle. Anna is torn between love and duty. He father chides her and she obeys by marrying Calbo, a Venetian nobleman, and uses the safe conduct pass to let the Venetians escape. News comes that Maometto's lost the second battle, and Erisso's saved the city, but somehow Maometto appears in her chambers, and she kills herself.

Order is restored, but in the process we glimpse another type of Turk,. In real life, the Ottomans consolidated their Empire by intermarriage - Maometto was part-Greek - so at the time, theirs was a more sophisticated authority model.  For 19th century audiences, Turks were supposed to be the enemy, so the idea of Maometto as lover must have caused frisson.

There are several recordings, of different versions of the opera, but I'm fascinated by the second  DVD version, filmed live in 2005 at the Teatro La Fenice di Venezia. In this version, emphasis is entirely on the drama in the music itself. The set is beautiful, but pure and spartan. Negroponte is Frontier Venice, not the metropolis itself. Simple backdrop of ruined church, which expresses the idea of Negroponte as a city on the edge, which could fall either way in the struggle of empires around it.  The Venetians are dressed in shades of white and grey. Anna herself (Carmen Giannatasio) is so pale she's unnatural, which stresses her position as the pivot between two cultures. Maometto (Lorenzo Regazzo) and his men are dressed in rusts and scarlet. Not aggressive, so much as offering a red-blooded alternative to the pallid Venetian world.

Minimal as this staging is, it's elegant and reflects the spirit of the plot and the music. The dilemma Anna faces is stark and she faces it with clear-sighted dignity. This comes though in the music too. It's melodious, but simple and unfussy. The long orchestral overture and interludes are sharply structured, a nice balance between lyrical and monumental. The vocal lines are direct, embellishments supporting character rather than for display's sake. In this version, some of the longer recitatives have been cut, but the action flows so naturally that their omission might be of greater interest to pedants than to those who enjoy music as drama.  Seldom have I enjoyed a staging as much as this, which, in its understated way, absolutely enhances the singing and playing.  The director and designer is Pier Luigi Pizzi, whose interest in baroque stylization comes through clearly.

The conductor is Claudio Scimone. Performances are good though not earth shattering, which isn't a demerit, in a drama whose very point is the human side of cosmic clashes. Regazzo's Maometto could be more forceful, and Maxim Mironov's Erisso looks and sounds too young. Carmen Gianattasio's Anna is nicely even. Anna Rita Gemmabella's femininity cannot be suppressed, so her Calbo doesn't convince. But the balance is good and the ensemble passages nicely done, so much so that when the main parts adventure into vocal flourish, they sound completely sincere. Rossini isn't Verdi, and 1822  was closer to Mozart and Haydn in spirit than to the furies of late 19th century maximalism. I'd love to hear Rossini Maometto Secondo again, in another staging that makes the most of its fine qualities.
at June 07, 2011