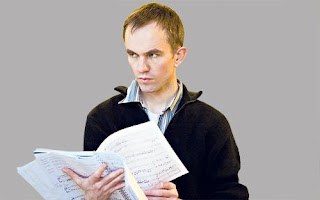 Exciting  news that John Fulljames has been appointed Associate Director for Opera at the Royal Opera House. He'll be working with Kaspar Holten who becomes Director from September 2011.  Fulljames is a daring, but inspired choice. This is significant news because it might mean a shift towards a more creative approach to opera.

As Anthony Pappano says in the press release, "we're constantly striving to present the very best on our stages". What that may translate to, who knows? But it's better than endless revivals of safe repertoire aimed at the West End market rather than at opera aficionados. I've wriiten about Holten before. Read here about his Copenhagen Ring which is interesting enough to stimulate Wagnerites and accessible enough to engage new audiences. A friernd has also written me about his movie Juan, based on Don Giovanni - more about that soon ! (there's a video clip on this site already, from March).  Fulljames is a daring, brilliant choice because he's close to cutting edge but isn't self indulgent. Look at the photo (Courtesy Johan Persson, BCMG).  Fulljames is looking at the singers while following a score ! 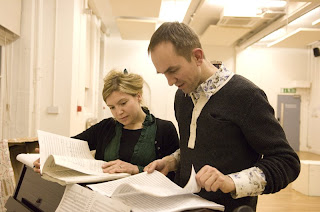 Think on that. In theory, everyone's supposed to work from the score. In practice we get abominations like Monty Python Faust. Fulljames got a First in Physics at Cambridge but all along has also been a musician. He even sang, for a while, so he understands voice. Each production he's made grows from understanding what's unique in whatever opera he's staging. This makes his work so stimulating because he seems to hear things with fresh ears. I adored his George Benjamin Into the Little Hill  last year. Read in detail about it at Aldeburgh and at the Linbury, ROH. Quite detailed description but read it to see why Fulljames's work is such a unique fusion of musical and visual expression. Berlow is a photo of Fulljames and Claire Booth preparing Into the Little Hill.(Courtesy BCMG, Katie Leedale) Again, the score is the star!

Fulljames is currently working on Luke Bedford's new opera Seven Angels with the Birmingham Contemporary Music Group and the Opera Group.  It's Bedford's first opera, eagerly anticiapted because he's perhaps the brightest young hope in British music, and one with a natural gift for writing for voice. Writing for stage is different to writing for the concert hall, so Bedford worked right from the start with Glyn Maxwell the poet. The text is ravishing, and so is what I've heard of the music. BE THERE. Bedford also worked with Fulljames and artist Takamine Tadasu almost from the onset, so the production grows organically from the music. "He has a deep and sensitive understanding of what I'm trying to do", says Bedford.

Fulljames's recent productions for The Opera Group include George Benjamin’s Into the Little Hill, Kurt Weill’s Street Scene, Jonathan Dove’s The Enchanted Pig and Galt MacDermot's Human Comedy (all three with the Young Vic), Elena Langer's The Lion's Face, Varjak Paw, The Shops, Blond Eckbert and Shostakovich The Nose. Street Scene recently won the “Best Musical” award at the Evening Standard Theatre Awards. Recent productions elsewhere include The Excursions of Mr Broucek, Romeo et Juliette and Hansel and Gretel (Opera North), Gianni Schicchi, Zemlinsky Florentine Tragedy and Mavra (Greek National Opera), Von Heute auf Morgen (Lyon) Tobias and the Angel (Young Vic), Nabucco (Opera Holland Park). In 2008, John directed Rimsky-Korsakov’s Snegurochka for Wexford Festival which opened the new opera house in Wexford, Ireland. John’s previous productions in Ireland were Susannah (Wexford) and The Emperor of Atlantis (OTC) both of which won the Best Opera Production Award at the Irish Theatre Awards. He's worked with many of the great directors in Europe and even directed The Ring in Bilbao and Seville.