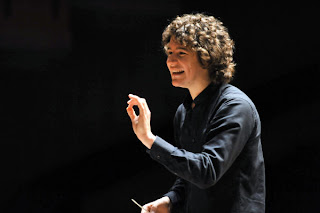 Glyndebourne Opera has just announced that Robin Ticciati will succeed Vladimir Jurowski as Music Director from 2014.  Ticciati's rise to prominence has been swift. He made his professional debut as opera conductor with Glyndebourne Touring Opera as recently as 2004. He's since conducted four productions at the main house at the Glyndebourne Festival, including Don Giovanni this summer.

Outside opera, he's known for his work with the Scottish Chamber Orchestra, who are very good. Only 2 years ago they created a buzz, touring the Highlands and Islands. The BBC did a show on that, very lively. Youth is on his side! photo credit : Chris Christodoulou