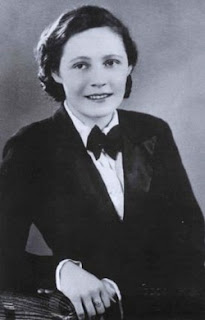 While looking up music in the post-Janáček era, I came across Vítezslava Kaprálová, (1915-40), among all the famous names who mentored her, like Talich and Chalabala.  Her father was a composer who'd studied with Janáček. She was very well connected indeed. She started composing as a young child and entered the Brno Conservatory aged only 15, where she studied conducting as well as composition. Two careers. The photo shows her in her conducting suit. She went on to Paris, but died suddenly, tragically, aged only 25.

The name  Kaprálová may ring bells, as she was the woman Bohuslav Martinu supposedly fell in love with, but could not leave his wife. I'd never actually heard Kaprálová's music before so ordered a Supraphon CD of her songs. Haha! One of only two copies available, the last one is £48! For songs you need texts, hence you need a CD. But quite a bit of Kaprálová's chamber and orchestral music is available on MP3. Scores are available too. Her music is fascinating. What a distinctive sound she has, even though she was so young. She's highly original, in a vaguely Janáček style, energetic and inventive. Yet you can already hear her opening out, after she moves to Paris in 1937. You can imagine her going far, leaving Martinu well behind.

Read more about Kaprálová on the Kaprálová Society website, the best resource, put together with love and by people who know Czech music well. There are music samples on the site too. Take your time - she's fascinating. Two samples below from real recordings (one of the youtube channels is digital orchestra) . The first clip is part 1/3 from Partita op 20 for piano and string orchestra (1939).The second is Sbohem a satecek, "Waving Farewell" for low voice and chamber orchestra (1939) premiered in Brno a few months after Kaprálová's death, by Rafael Kubelik.