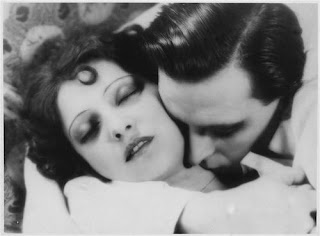 Erotikon - the drama Janáček didn't get round to writing. It's a film made in 1929, a year or so after his death. You bet he'd have gone to see it, with Camilla in tow, because it was a sensation. It's still a landmark in European film history. Janáček would have loved it.

A stormy night in a small Czech village. A stranger misses his train and is taken in by the gruff station master. Station master's daughter, Andrea, is transfixed. She goes chastely to bed, but her sexuality's aroused. She writhes orgasmically in bed, alone, dreaming. Phone rings, wrong number, but now she and George the stranger are both up and one thing leads to another. This was one of the first explicit sex scenes on film, though you don't actually see them undressed. The final act is described by filming a water drop splattering on a pane and drifting slowly down.... 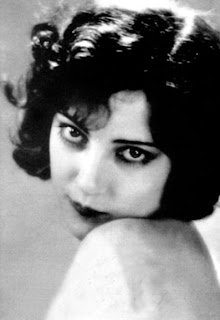 Andrea is played by Ita Rina (1907-72) a Slovenian girl who in real life had run away from a small railway town to seek fame in the wider world. She has the kind of smouldering  charisma that lights the screen with personality. "I know you will never come back" she tells the man. Fatalism and realism. She doesn't manipulate the man even though what she's just done puts her outside the pale of small town society. Typical brave Janáček heroine.

But that one encounter made her pregnant so she's the one who has to leave. She gives birth in a hovel. More scenes of agonized writhing. Surprising how the movements of orgasm mimic the agony of childbirth. The baby's stillborn. "It's better for you this way" says the hard-bitten peasant midwife. Meanwhile elderly father in village defends daughter's virtue against his friends, only to discover a letter from seducer enclosing money. Father crumples, shattered. 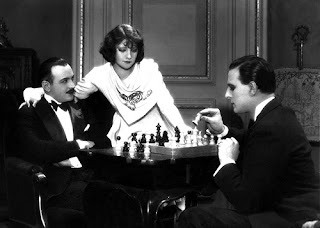 Out on the street again, Andrea's attacked, but her rescuer (Hilbert) is injured. At the hospital he needs a transfusion and Andrea saves his life by giving her blood. So Andrea moves in with Hilbert, who is rich and drives a fancy car. One day they meet George in a piano shop. Hilbert takes a shine to him and they become a threesome, socially. But George and Andrea are still hopelessly in love. Soon Hilbert twigs. Long, tense scene where George and Hilbert play chess.  George wins, but Hilbert checkmates by saying he and Andrea are leaving for the South.

Previously, George had been in an affair with a married woman. He tells her it's all over and she leaves in a rage. Andrea arrives with a suitcase. Bliss, for a moment. But then she spots the married woman's powder compact. Is George a cad after all? Then the married woman's jealous husband arrives and Andrea hears the men quarrel about the affair. Horrified, she flees out the back door. Husband shoots George dead. Andrea returns to Hilbert who knows she was planning to leave him for George. When she tries to explain, he says, "Don't talk" and embraces her.

Ideal plot for a Janáček opera! Throughout the film, there are sequences just begging to be turned into music: the station master's rustic cottage, with a Virgin Mary over Andrea's bed,  his bucolic friends, playing cards and drinking flagons of beer. In the city, jazz bands, dancing on New Year's Eve, and huge empty stairwells, heavy doors. Vignettes like the beauty parlour where the married woman has her face massaged and her body pummelled - a synonym for sex.  The husband is so clearly defined you can almost hear his music - mock courtly bassoons and tubas, intercut with screaming brass. George is a tenor, Hilbert a baritone, and Andrea a glorious coloratura with a manic edge. The whole film is held together wirth recurrent images of trains, speeding, cars, telephones, the "modern" world relentlessly rushing forward. As Andrea leaves with Hilbert, the train carriage they're in mists up, and drops of water run down, like the rain on the windowpanes, long ago in Andrea's childhood home.