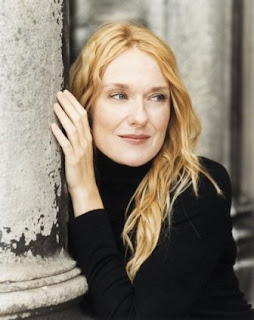 This year's Gala opening evening at Aldeburgh sold out to top, top level Friends within moments. Thousands wanted to hear Simon and Mrs Rattle back with the CBSO, his old band, Aldeburgh regulars for many years.  The choice of  programme was daunting : Mahler's Das Lied von der Erde after Messiaen's Et expecto resurrectionem mortuorum. Could any contrast be more extreme? And in a small auditorium like the Maltings at Snape ?

Messiaen dreamed that Et expecto resurrectionum mortuorum could be performed in the mountains of the French Alps, booming across vast valleys. It's probably the most monumental piece in the whole repertoire and can even raise the roof at the Royal Albert Hall. At Snape, it's a wonder Health & Safety didn't intervene. Anyone with migraine or inner ear problems is probably still suffering.

I've been writing about Messiaen and about Et expecto resurrectionum mortuorum  for years, so please look up this link HERE which leads to other links, so you can keep exploring. Rattle conducted a good Messaien Et exspecto at the Barbican earlier this year, but at Snape sound considerations did make a difference, which you can even hear on the BBC broadcast.

More interesting was Mahler's Das Lied von der Erde.  When Magdalena Kožená first started singing Mahler, she didn't seem like a typical Mahler mezzo. On the other hand stereotype delimits.Nothing in the rule book demands dark-hued sobriety. Indeed, as Claudio Abbado showed in Berlin, translucent, shining textures emphasize the uplift in the music. There Anne Sofie von Otter's singing was pure and deeply committed. Diva doesn't sit well in a piece whose whole message is transcendance over worldly pettiness. Kožená's voice is prettier than von Otter's but she hasn't quite the same fierce sense of character. On the other hand, it was clear from this performance that she wasn't herself: her chest sounded constricted. Pacing herself carefully to conserve her reserves, she couldn't let go as she would probably have done in better circumstances.

Michael Schade has sung the tenor part in Das Lied von der Erde many times: nothing spectacular but also nothing wrong, either. Fair enough, considering that this was the gala opening of a non-Mahler festival and no-one was nit picking. Rattle and the CBSO were the draw and fans would not have been disappointed.
at June 12, 2011

I liked the dignified intensity of Kožená in the very last phrases in Abschied.
The Messiaen is a first hearing for me. Whereas WW1 & 2 were like the contrary of Beethoven 9, destroying millions and hope for years to go, it is good that such a work exists.
Lowbandwith sound here but still fairly good.