Why Vianna da Motta is interesting 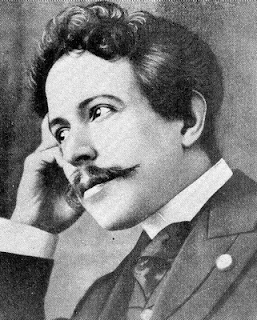 Listening to Daniel Barenboim play Liszt last week stimulated me to listen again to Liszt's music as music, free from the flash of popular performance practice. Music and performance aren't necessarily the same thing. Then I remembered José Vianna da Motta, one of Liszt's pupils. Vianna da Motta was born in the islands of São Tomé off the coast of Africa in 1868, yet by age 14 he was in Germany, studying piano and composition.  He was a pupil of Franz Liszt in Bayreuth, and after Liszt's death, worked with Hans von Bülow. A devotee of Liszt (about whom he wrote a memoir), but deeply immersed in Wagner whose music he adored (despite first hand knowledge of Wagner the man and the way he treated Liszt).

Da Motta became a prominent soloist, appearing at the Wigmore Hall in 1903 when it was known as the Bechstein Hall, a mecca for pianists. Obviously he played Liszt and Chopin, but he was also an important interpreter of Bach and Beethoven (playing all 32 sonatas in 1927, the Beethoven anniversary year)

Da Motta was one of Ferruccio Busoni's closest friends. Busoni and da Motta formed a duo. Recordings still exist of them playing together. They were so close that da Motta provided commentary on Busoni's music  and no doubt was thoroughly familiar with Busoni's theories on art and culture. Both of them were outsiders, with perspectives on the mainstream others might not tap. Da Motta might look like a dandy in this early photograph but anyone so close to Busoni cannot have been an airhead. In his autobiography, da Motta mentioned how he and Busoni would scrap,  Busoni mocking da Motta's fondness for Wagner, da Motta mocking Busoni's thing for Berlioz.

Da Motta was also a composer. His 1895 symphony À Pátria is fairly well known as it's a stirring piece, very much of the period. It's really quite a sophisticated piece for a composer aged 27, and shows an awareness of current trends around him. Quite lyrical in parts too. More readily available is the CD from Hyperion with Artur Pizarro.  This contains da Motta's Piano Concerto in A,  Ballade and Fantasia Domestica. Because da Motta was a pianist, his works for piano are worth checking out - downloadable from amazon. I first discovered da Motta through his Lieder, mostly written before the First World War, also very much of the period. Much better than Franz Scheker's Lieder, for example, they're more pianistic and at ease with the idiom. Da Motta may have been Portuguese but he was absolutely fluent in German and in German culture, but maybe people typecast composers into boxes. Da Motta got sidelined because he went back to Portugal, and you need mainstream presence to get a mainstream profile. It's a pity he's not better known as he's pretty good. Here is an extract of the Piano Concerto in A, and the Finale from À Pátria