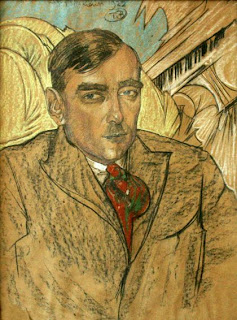 Karol Szymanowski everywhere this year! Szymanowski was Poland's "first modernist", a cosmopolitan intellectual and contemporary of Bartók, dismissed by the Communist Party for his aesthetic background. The current Szymanowski revival started in the 1980's with Simon Rattle, who deserves much respect for his support. The Barbican's on the forefront. Boulez is conducting two Szymanowski concerts in May, and in Sept and October Valery Gergiev is conducting Szymanowski with a  special study day included. The Barbican schedule suggests two performances of Symphony no 2 which may or may not be correct as Symphony no 3 is the most spectacular. Gergiev is pairing Szymanowski with Brahms throughout, which is interesting. What might that mean? Hearing Szymanowski in context with Scriabin, Stravinsky or other Gergiev favourites might be more stimulating. Jurowski's pairing it with Zemlinsky at the South Bank, and Boulez is doing Szymanowski "pure".

Colin Davis is celebrating his 85th birthday by conducting no less than 12 concerts. Some Davis specialities, like Mozart and Sibelius, some less his regular scene, like Mahler and Britten. Best bet, I think, is the performance version of Elgar's Third, prepared by Anthony Payne on 27/9/12. First heard in 1998.it almost stole the show at the Elgar Centenary Festival in 2007, an outstanding performance (Not Davis but Oramo) with all the big names in Elgar studies gathered. Bernard Haitink returns in February for two Bruckner concerts with the LSO. The LSO makes a brief foray into modern music, first with Daniel Harding in February in a focus on Mark-Anthony Turnage, with a premiere on 7/2/12). Then in April, "LSO Futures week" which basically means François-Xavier Roth conducting Varèse, Coiln Matthews, Boulez, Adams and Stravinsky. He's doing new work by Tansy Davies and Jason Yarde but the LSO hasn't been adventurous for a long time and is getting grey.

The BBCSO programme is very much more exciting.  Neeme Järvi is doing Shostakovich 4 on 3/10 and Mark Wigglesworth does Tippett and "The Ring - an orchestrral adventure", arranged by Henk de Vlieger, the Dutch percussionist, which received its Hong Kong premiere in 2008 under Edo de Waart. It tells the whole Ring saga in 50 minutes of orchestral invention.  On 18/1/13, Elgar, Haydn and two new Chinese composers. Intriguing titles : Qigang Chen Reflet d’un temps disparu and Raymond Yiu The Londoner Exceedingly Injur’d.

Ilan Volkov pits Schubert on 15/2/13 with a new Schubert-fantasie by Dieter Schnebel and a new work by David Sawer, Flesh and Blood. Sawer's Gold and Straw was a big hit with BCMG/Brabbins,(see my review) so this new piece with Christine Rice and Marcus Farnsworth will be a must.Then, the mercurial Thomas Dausgaard conducts Neilsen 4 on 22/2/13 with Prokofiev and Ernst Bloch's Schelomo, rarely heard but highly regarded. More Tippett in the spring with David Robertson, Alexander Verdernikov, Martyn Brabbins and Andrew Davis - in fact, Tippett spread through the year. Must be an anniversary too. My top pick will be Ingo Metzmacher on 25/5/13 - Shostakovich 11 and Wolfgang Rihm Nähe-Fern-1.

Thought you might enjoy this lovely video of Kronos Quartet (currently at the Barbican) & we'd be very grateful if you could share w/ your readers/followers. http://t.co/IwIkRJn