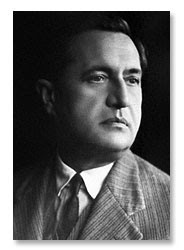 Heartfelt thank you to the reader who sent me a copy of the recent Supraphon reissue of Václav Talich's remarkable performance of Smetana Má vlast. This is no ordinary concert, it's a historic moment. It's 5th June 1939. The Germans had occupied Czechoslovakia with the blessing of the British, ending the cultural renaissance that was the first Czech Republic. Conducting Má vlast was symbolic protest and the Prague audience knew it. This performance, the second in a series, was broadcast on Czech radio, and woud have been lost forever had it not been picked up by Norwegian radio, and almost miraculously survived on a pioneer tape recording.

It's an explosive, violent performance. Talich knows that his audience know the piece so well that they can cope with a radically different interpretation. "Our homeland", this performance seems to scream, "betrayed to Hitler"! The audience bursts spontaneously into applause between movements because they, too, are expressing rage at the situation their country faces. This isn't silly "audience participation" but part of the message the Czechs are sending the Nazis. The crowd won't stop, and perhaps some knew they'd soon be silenced forever. So listen to those roaring voices and respect.

The two final movements, Tábor and Blanik, are more than picturesque rural vistas.Tábor was the centre of the Hussite wars in the 15th century which shaped Bohemian identity. So Talich exaggerates the violence in the music, the menacing slow tempi, fast, marching tempi, thunderous timpani like cannon fire, brass that seems to spit flame. The Hussite ancestors of that audience might have used quaint muskets and leather armour. Smetana himself could never have imagined that their descendants would face tanks, planes and bombs. But it works, powerfully. Listen to the "flying" motif repeated all over the orchestra, building in confidence. Blanik is the mountain where St Wenceslas is supposed to lie asleep until the country needs to be saved.That's the statue in St Wenceslas Square, not far from the concert hall where Talich was conducting. This final movement draws together the whole piece, the idea of the Moldau continuing to flow and fertilise the country, the Hussite hymns and the Wenceslas legend, promising hope. Then the audience spontaneously bursts into singing the Czech national anthem. This isn't a concert, it's a statement. Some of that audience would have gone home passing the statue. Few of them would have missed the significance. Seventy three years later, nearly all of them are dead but here they are preserved on tape.

This fantastic disc includes six of Dvořák's Slavonic Dances, recorded on 13th June 1939, a week after that searing  Má vlast.  Again, the performance is unusually ferocious and defiant.  Everyone is listening intently, but they are hearing more than Dvořák. So much of the way we experience any performance is coloured by what is inside ourselves. Lord no, I don't ever want to experience music in such circumstances. Nor are interpretations like this always true to the composer's intent.  But by God, we need this recording to remind us what music can mean.

Talich (1883-1961) was a key figure in music circles during the first Czech Republic, a friend of Josef Suk, and of Leoš Janáček, several of whose operas he premiered. Had he been American, German or British, he might be a household name. Talich's reputation isn't what it might be, thanks to internal Czech politics at the time. He didn't get on with a key politician who became culture minister in several governments and was able to stifle those he didn't like, among them Janáček. This politician is caricatured in Janáček's The Excursions of Mr. Brouček (which also refers to the Hussites).  After the German surrender, Talich walked back to Prague and was promptly arrested for collaboration. There was no evidence and he was released but Talich's career was blocked. Irony isn't it, that when even the Nazis couldn't completely silence Czech artists, some toadying beetles managed quite well.

Please also read Kapralova - songs of Czech Independence, Bílá nemoc - Hugo and Pavel Haas (Czech anti-Nazi film) and of course lots on Janáček, Smetana, Dvořák, Suk and many, many others suppressed by the Nazis. Interesting too that Má vlast was one of most popular pieces of music in 20th century China. Maybe they were responding to it like Talich did, though with different cultural landmarks?
at January 09, 2012

Exactly which operas of Janacek or Suk did Talich premiere?
Talich did not conduct at the National Theatre till the mid-thirties and in any case Janacek's later operas were premiered in Brno by Neumann or Bakala.Talich did of course premiere Janacek's Sinfonietta and orchestral works of Suk. The most significant opera premiered by Talich was probably Martinu's Juliette in 1938.

What Suk opera? Talich was close enough to Janacek that tehy discussed the late work together as it was being written, incl From the House of the Dead. Premieres can mean many things. Talich did conduct memorable Janacek productions in Prague. What are you trying to prove? Talich was an important figure with or without Martinu, who in any case spent much of his adult life outside Czechoslovakia.