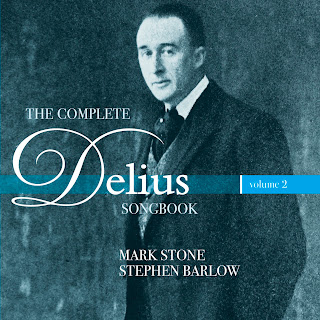 "English music? I don't know what that is", Delius said to Eric Fenby, who very nearly aborted his self-appointed mission to help the composer. But Delius was right. Music is rarely "nationalist"and Delius himself was international.  Mark Stone's recording of the Complete Delius Songbook series is a valuable contribution to Delius studies as it includes perfomances of lesser known works and new translations, many by Stone himself.

Listen to the first volume in this series, which I reviewed HERE, where Stone and pianist Stephen Barlow perform Delius's earliest songs. Grieg's music expressed an aesthetic significantly outside the European mainstream.  The purity of Norwegian landscape was a metaphor for independence and creative renewal. Delius learned from Grieg not merely the trappings of "Scandinavian" culture, but the concept of individuality.  In this second volume in the series, Delius sets Danish, French and German poets, but the style is his own.

Included in this new disc is a piano song version of the Nietzsche setting, Noch ein mal, O Mensch, Gib acht!, which in 1904/5 became part of Delius's A Mass for Life.  A version for solo voice, chorus and orchestra was written six years before the song but the version here was found among the composr's papers after his death. It's undated, but possibly predates both other forms. Jelka Delius said it was the earliest version of all. The melodic line is already clear, surprising calm, unlike Mahler's more intense setting in his Symphony no 3. Mark Stone's deep baritone gives gravity.

Delius wrote four more Nietzsche songs around 1898, possibly sketches for large scale works, though they were published decades later as independent songs.  Stylistically they connect to A Mass for Life, but they're much stronger musically. Each is a miniature, yet powerfully felt. Although the subject matter is completely different to A Village Romeo and Juliet, completed in 1899, perhaps Delius is thinking in terms of dramatic, declamatory song? Certainly Stone's delivery suggests this. He's an opera singer and brings to these songs much more colour than some of the other songs on this disc can support. The five settings of poems by Verlaine depend more on heavy pedal rather than elegance.

Delius is more in his own element, if that's defined by watercolour lightness of touch in the paler tones of the other songs in this collection.  Two groups of songs from the Danish, eleven early songs and other individual pieces. With Autumn, Dreamy Nights, Summer Nights on the sea shore and Summer Landscape we're in that quiet, watchful mood that Delius so often evokes. It's as if time is standing still as the composer meditates on the moment. Below is Silken Shoes, an "expression" as Mark Stone says in his erudite programme notes "of the exquisite...nature of the beloved. Delius uses rising triplets throughout to underline the triumphant nature of this song...and comes to a warm, satisfied ending". Buy the recording DIRECT from Stone Records, or thru the usual sources.