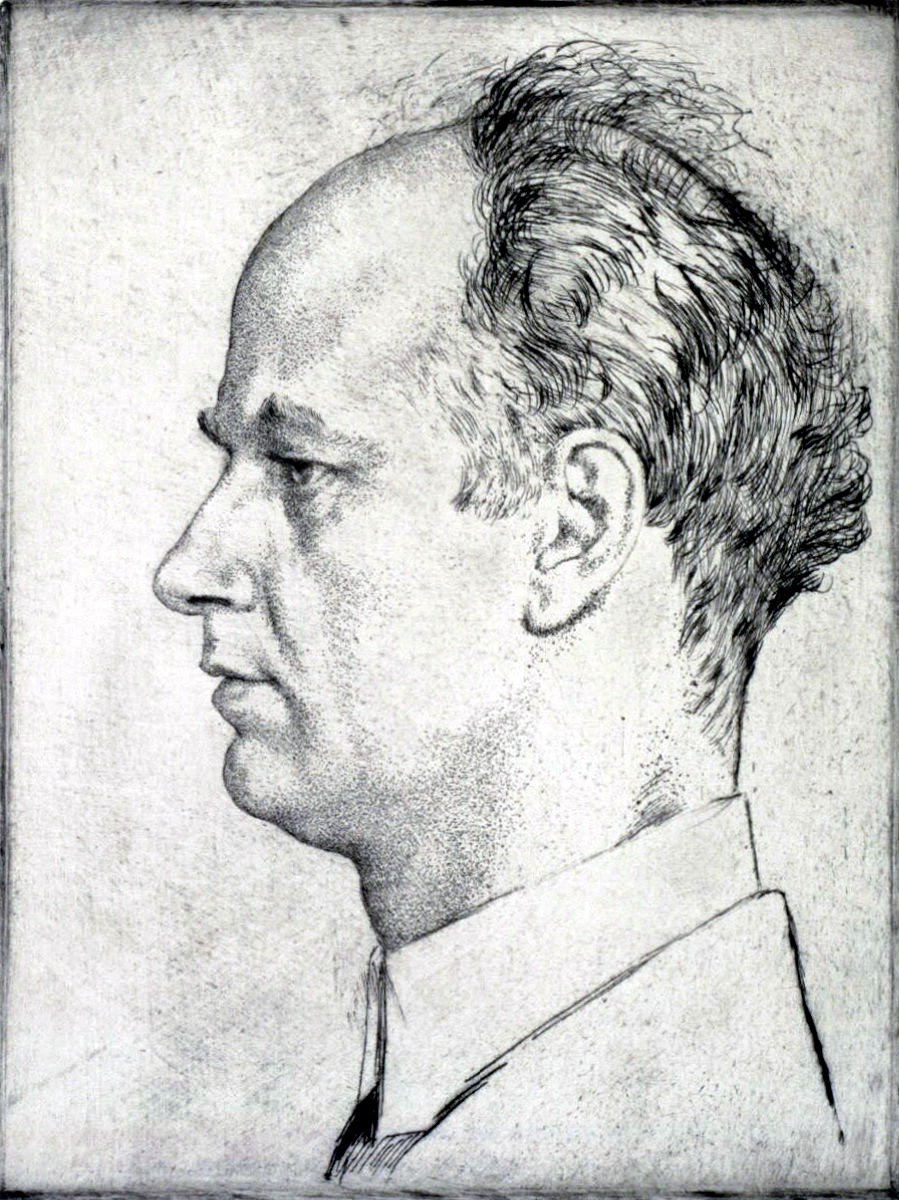 Might the fabled "lost" documentary about Wilhelm Furtwängler made by his son Florian be about to surface again? Jointly commissioned by Bayerischen Rundfunk and the BBC in 1970, it has circulated in an inferior copy, now withdrawn. Florian (d 1992) was a professional film maker so the film is very well made. In full, in German, it runs over 100 minutes. Although it was made over 40 years ago, it includes unique testimonies from musicians who knew Furtwängler well. Jascha Horenstein, Hans Keller, and Szymon Goldberg, leader of the Berliner Philharmoniker until 1933.

The film firmly places Furtwängler in the context of artistic circles in late 19th century Munich. Furtwängler's father was an eminent archaelogist, his mother a painter. He was home schooled, but absorbed cultural experiences closed to most boys. On a trip to an Italian chapel, in 1902, Furtwängler disaappeared, to be found inside a Michelangelo crypt, inspired to write music that was to become his Te Deum. It's hugely ambitious, with massed choirs : the film shows its first performance, in 1967. (drawing above is by Emil Orlik, 1927) 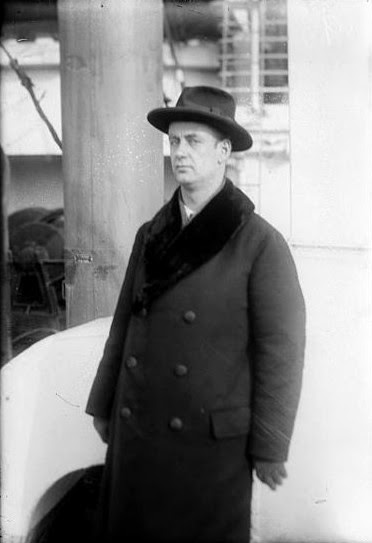 Furtwängler's first love was composition but his career progressed so rapidly that he became a conductor almost by default.  His style was idiosyncrasic. Theres a description of him, complete with action sketches, flailing his arms and legs, expressing the music with his whole being. Fundamental to his style, however, was his conception of what interpretation involved. "The stronger the structure of a piece, and the greater the comnposer's mastery of form", he said "the more clearly defined is the interpreter's task. It is only when he has studied and mastered all the details  that his real task begins, which is the weaving of all the particular parts into an organic whole."

Furtwängler's style was controversial. Hans Keller describes Furtwängler at a Toscanini Beethoven 9. After a few bars, Furtwängler stood up, shouting "Bloody time keeper!" and stormed out. Definitely not a troll, but a man who knew his music so well that it hurt him to hear it mangled. Keller then describes the passages from recordings. Toscanini takes the opening sextuplets so carefully that you can hear each note unfold.  But Furtwängler smudges the beat so you don't hear the component notes but the "tense, vague beginning before the beginning", as Keller says, expressing their meaning within the context of the passage. There's an ominous rumble, yet nimble and alert, intensifying the outburst when it comes.

Nowadays it's fashionable to judge a performance by tempi alone, but as Keller says, "Tempo in itself is nothing. It is a function of structure", He listens to a recording of Furtwängler conducting Mozart Symphony no 40. In theory, it's so fast that it seems almost impossible to maintain. "I did not believe it possible until I heard it" adds Keller. "You cannot decide tempi unless you experience the structure and understand the phrasing of the interpreter".  As for  formulaic tempi, Furtwängler himself said simply, "there is no such thing". 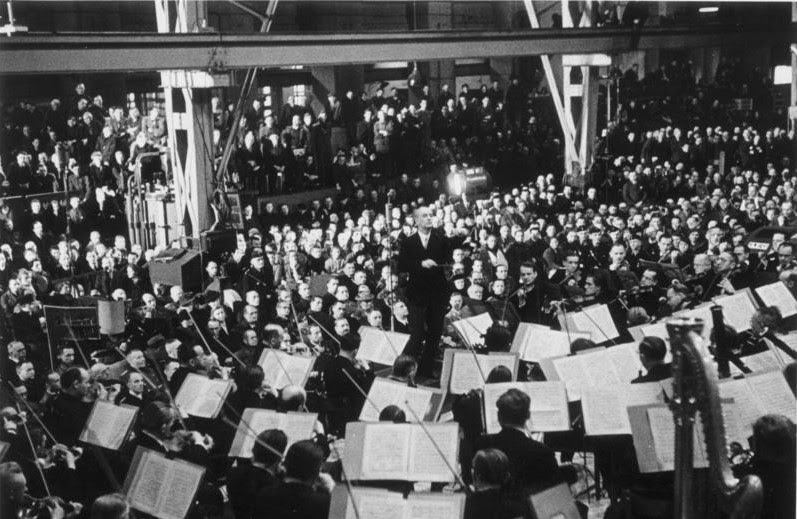 In the Berliner Philharmoniker archive, there's a good documentary about what happened to orchestra members when the Nazis came to power. Szymon Goldberg figures in it, though he was forced to emigrate almost immediately. Furtwängler protected those he could, though of course he couldn't protect everyone. He played Mendelssohn in public as late as 1935, and refused to accept pensions and estates from the regime.  His high profile defence of Paul Hindemith took courage. Jascha Horenstein says, stiffening up to stress his words, "I would like to say emphatically that Furtwängler was not a Nazi". Furtwängler was on an inevitable collision course with Goebbels so he withdrew from public life, only to return to the podium because he realized that music was a means of standing up to tyranny. The photo above, from the Bundesarkiv shows Furtwängler conducting for factory workers in 1942. Some of them may have been Nazis, but not all and in any case, all were human. The film includes the famous clip of Furtwängler playing Beethoven 9 to the Nazi bigwigs. They're too stupid to know what Beethoven was getting at. Goebbels, who knew his Schiller, must have squirmed in suppressed rage. 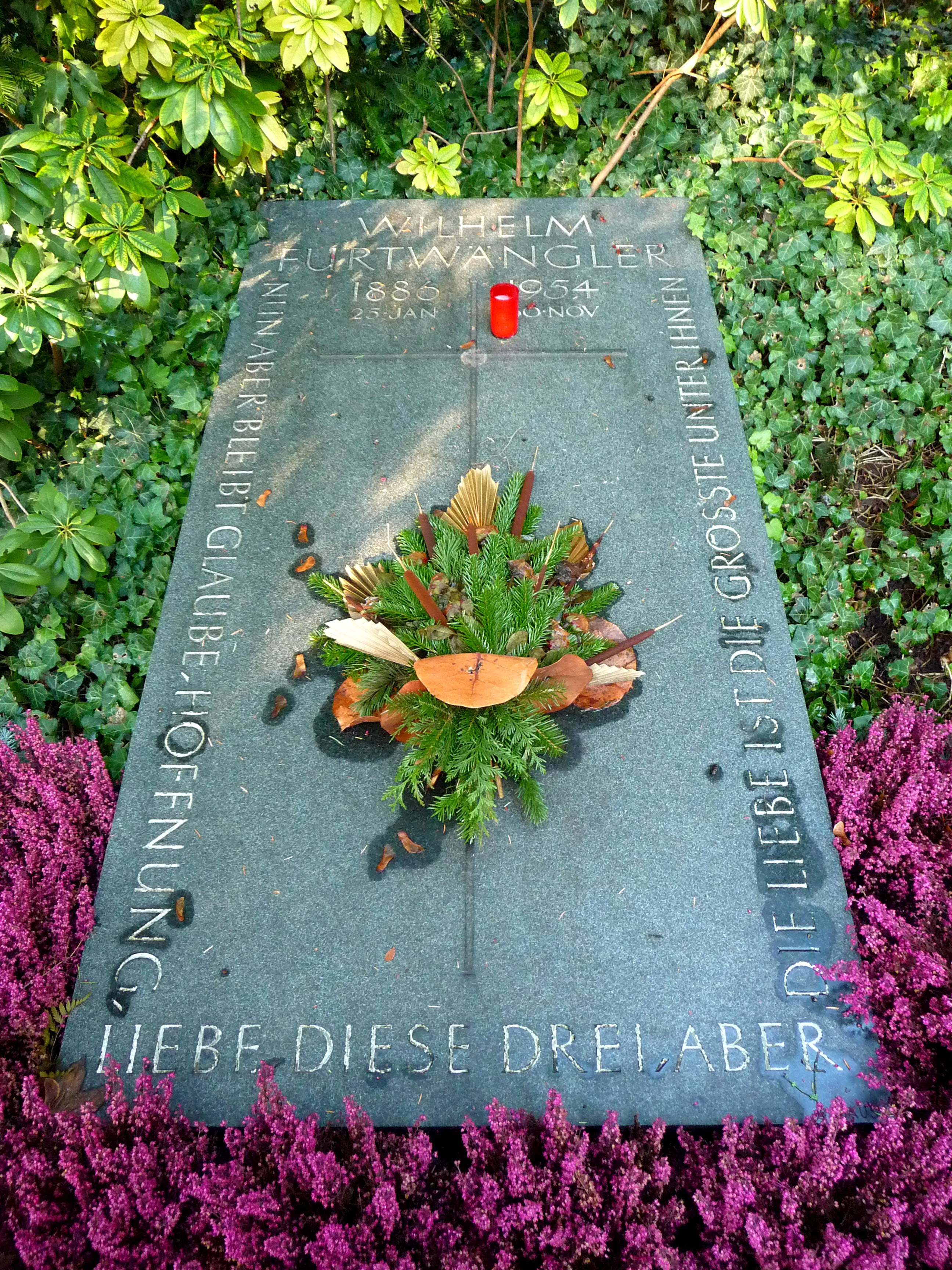 By February 1945, Furtwängler heard that he was about to be arrested. He fled to Switzerland and turned again to composition, supported financially by Swiss music lovers. The film emphasizes how much Furtwängler's own music meant to him. A few years ago there were a number of recordings, which I wrote about at the time. The juveniila was surprisingly interesting and the incomplete Symphony no 3 (1954), heard here, is impressive. One day, perhaps, Furtwängler's music will be heard more often.

Aged 12, Daniel Barenboim worked with Furtwängler. It was mutual admiration. "There was always an element of improvisation and surprise in his work", says Barenboim. A member of the Philharmonia who worked with Furtwängler tells how he communicated with the players.  He didn't tell them what to do. If he didn't like something, he'd be thinking why, and the orchestra would do so too. "I don't like the word working "under" a conductor. It wasn't like that with Furtwängler". Not mentioned in this film is the anecdote of how Furtwängler walked into a rehearsal and the orchestra lifted their game even though he wasn't conducting.

What made Furtwängler so good? "He risked a lot, as every great artist must", Keller sums up. "It is the easiest thing in the world to always play well. Composers, too. Mozart excepting, their greatness is in direct proportion to their ability to take risks". Furtwängler admired Arnold Schoenberg and sensed in him something exceptional, though he didn't relate to 12 tone theory. But he played Schoenberg, who admired him in return. "Better than all those Toscaninis". One of my conductor friends was given one of Furtwängler's batons as a gesture of respect. Furtwängler had given it to someone he admired, who then passed it on.
at January 05, 2012

I uploaded the BBC version of the Furtwaengler documentary to YouTube. It is different from the German version, which is longer but does not include the comments by Hans Keller, Horenstein, Szymon Goldberg and others. The two versions used the same original footage by Florian Furtwaengler but assembled different documentaries around it.

Thank you Misha from the bottom of my heart !!! I had never seen this before but some of my friends saw the Japanese transfer of the German one. I figured this was the BBC version with so much Hans Keller in it. You are wonderful, I just didn't mention yoiur link for obvious reasons, but anyone who cares will know where to search.

Clarification: Florian Furtwangler was a nephew of the conductor, not his son.