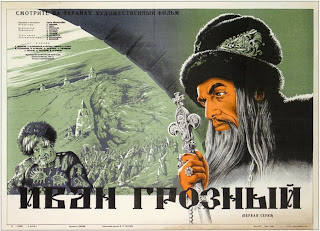 In this Prokofiev - man of the people? season at the Royal Festival Hall, Vladimir Jurowski has been examining Prokofiev's career after his return to the Soviet Union, placing his later music in context. On 28/1/12,  he presented two rarities, one a premiere,  focussing on Prokofiev as dramatist.  It was a winner. Thrilling music, but also an indication of what the composer might have meant about reaching the people.

Popular art need not be populist. Film was a revolutionary art form because it reached the masses, even those who didn't realize that what they were watching was "art". Eisenstein was an artist, but used mass media to get his messages across. What better way for a man like Prokofiev to use his art to reach millions who might never enter a formal concert hall? In the west, people are perplexed that anyone should leave "freedom" for Communism, but at the time, many intellectuals were idealistic. Stalin was the price they had to pay. Similarly, many Chinese intellectuals returned to China when the country was in need. It was moral imperative, and then the Cultural Revolution.. Maybe it's just not a concept everyone for themselves societies can grasp, but it's not without honour.

"I serve Russia, not myself" to paraphrase Ivan the Terrible in Eisenstein's masterpiece, with score by Prokofiev.  The Tsar's primary duty is to serve the people, even if he's bloodthisrty and immoral. Although Soviet censors may have balked at Ivan the Terrible Part II, it doesn't show the tsar as villain so much as an individual motivated by ideals, although he's become twisted with power and intrigue. Curiously, Ivan is an artist, a "man of the people" in his own way.

The world premiere tonight was Levon Atomyan's 1961 version of Prokofiev's score for Ivan The Terrible , condensed into less than an hour.  It was approved by the Union of Soviet Composers (one judge being Shostakovich), but Atomyan had a stroke and the work remained in his archive.  Although there is another arrangement, by the conductor Abram Stasevich, who recorded the original sound track, Atomyan was a close friend of Prokofiev and influenced his return to Russia.

Atomyan's arragement doesn't follow the narrative in the film, but reshapes the soundtrack in symphonic form in seven movements. While we hear the magnificence which represenst Russian glory, what comes over more prominently is a gentler. more human Ivan.. After the belligerance of the first section, there's a folk song about a beaver who is hunted down for his pelt. Folk melody, perhaps, but brutal. Prokofiev wanted the singer,to sound  "as senile as possible, as though holding a cigarette between the lips, as though  through a comb", I wouldn't say that was what Ewa Podleś sounded like, for at 60, her voice is still naturally warm and rich,  It's the song Yefrovsinya, the Tsar's aunt later sings to her own son,  as she plots the Tsar's downfall.

The song of the Oprichniks, the Oprichnina appears in full in the seond part of the film, but  its savage pulsating staccato occurs throughout the soundtrack, In this arrangement it's the third segment, enmphasing the primitive power of Ivan's terrifying hitmen.  Andrey Breus sang the baritone part, supported by the male voices of the London Philharmonic Choir. One should feel fear and revulsion. but the music is so infectious, you're almost drawn into it, which is rather worrying. But then, that's what mobs are like.

The 4th and 5th movements describe Ivan's marraige to Anastasia, the "swan", whose beauty and purity stand in contrast to the intrigue around them. Would he have turned out differently if she hadn't been murdered? The film links the poisoning of Anastasia to the murder of Ivan's mother, which made the young boy determined to be strong.  Atomyan adds Ocean Song for contralto and orchestra, which doesn't appear in the film, but fits the story well, and connects to the song Yefrosinya sings to her son. A vivid depiection of the attack on Kazan, complete with cannons, and the chorus singing a hymn to Russian glory. The gory elements in the film are played down, the orchestration emphasizing quirky good humour.  Eisenstein, Prokofiev and Stalin were all dead by 1958, when Ivan the Terrible Part II was unbanned, but the ideas were still dangerous. Atomyan's finale, the Magnifcation for chorus and orchestra, is straightforward glory on Russian themes. It's a watering down of the original for practical/political reasons, but is rousing and entertaining. Populism rather than art.

Atomyan's mediocrity makes one all the more appreciate the courage and artistic integrity of Eisenstein and Prokofiev.  Fabulously lively playing from the London Philharmonic Orchestra. Jurowski made his point, with glory!

Simon Callow and Miranda Richardson narrated Prokofiev's Incidental Music to Egyptian Nights. This was an experimental theatre project, directed by Alexander Tairov in 1934, before Prokofiev made his final committment to return to the Soviet Union. Tairov mixed passages from Shakespeare, George Bernard Shaw and Pushkin to create a story that covered Cleopatra's life from youth to death. Prokofiev's score runs to 44 numbers, played with verve by the LPO. But all attention was on Callow, who created one figure after another - Julius Caesar as old rake, Caesar as ruler and betrayer, Mark Antony and the Irish-accented fig seller who brings Cleopatra the asp.  Callow was wonderful - no stilted RADAisms that some actors might use, but warm, natural, imposing and funny by turns. The script's clunky,  but Callow saved it. Richardson's Cleopatra was fun too, though her part's more safe. Although the piece runs for exactly the same time as Ivan The Terrible, the strange hybrid form tends to drag and confuse. But the point is that Prokofiev realized it was "experimental" even as Stalin's purges were kicking in.

Excellent booklet notes. I wish I'd beem to more in this Prokofiev - man of the people? series. Can't wait til Simon Morrison's book on Lina Prokofiev is published later this year. Lina was the one who really sacrificed herself for Russia. Please see my other posts on early art  film, music for film, political film, suppressed composers etc.
at January 29, 2012

Prokofiev shows that "the art of the people" need not be crass. Popular need not be populist.