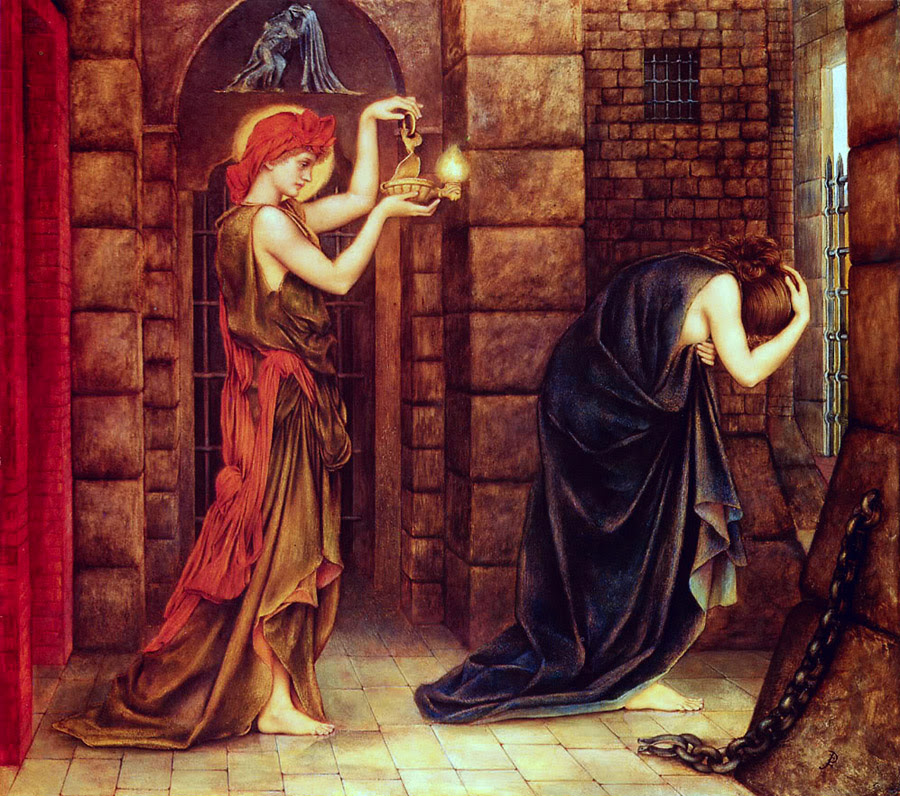 At last, Luigi Dallapiccola's Il prigioniero came to the South Bank. How happy Esa-Pekka Salonen must be that he returned to London, where he has a top orchestra in the Philharmonia, who relish exploring new repertoire, and audiences who appreciate what they can do. Il prigioniero is the latest adventure in a series of ground-breaking performances like Gurrelieder, Zemlinsky's Lyric Symphony and the Bartók year.

Programming Beethoven's Fifth Symphony with Dallapiccola was perceptive. Il prigioniero could be Fidelio with bite. As the inmates at Guantanamo Bay can tell us, happy endings don't happen. However, the Philharmonia put so much effort into Dallapiccola that Beethoven managed to fall flat. Nonetheless we can hear Beethoven any time and can always grab a good CD. Il prigioniero needs to be experienced live.

The Royal Festival Hall was shrouded in atmospheric darkness. (Semi staging by David Edwards, Lighting by David Holmes)The savage, angular opening chords of the Prologue lacerated. When Dallapiccola was writing, most of Europe was one big political prison. No cross-dressing wife, inexplicably fooling prison guards. Instead, a mother wailing at the all powerful Grand Inquisitor, whose head transforms into a skull. No false hopes. Above the stage, a choir sings, and the RFH organ booms menacingly. The Inquisitor holds the reins of Church and State (the setting is the revolt of the Spanish Netherlands). The prisoner sings graphically about suffering - iron and fire, fear of sleep and fear of being awake. He's no Florestan, but an ordinary, terrified man. A warden offers hope. He carries a lighted candle, he calls the prisoner "Fratello" (brother) and tells him about uprisings in Ghent and other cities. The warden sings of a giant bell ringing for freedom, which gives Dallapiccola a chance to write a  fugue-like section, full orchestra and organ in full throttle. For a moment the prisoner feels like a hero. Somehow he crawls out of the dungeon and feels fresh air, and thinks of distant mountains. But it's a cynical trap. The prisoner and his fellows are burned at the stake. The cruellest torture is the illusion of hope.

Il prigioniero isn't easy to stage, for it's effectively a one-man opera, with the mother and warden fulfilling limited parts. It's not a chamber opera, either, for the orchestral forces are vast. Indeed, I doubt that full staging would add anything the imagination can't suggest. Lauri Vasar sang the prisoner very effectively, nice ringing tone with just enough desperation at the edges. Paoletta Marrocu sang his mother, veiled in black, gesturing like a figure in a Greek chorus. The Warders/priests were sung by Peter Hoare, Brian Galliford and Francisco Javier Borda. Yet Il prigioniero isn't really a "singing" opera so much as a symphonic work with voices and storyline.  Not so different from Fidelio, after all. The performance was vividly dramatic, Salonen firmly keeping the pace with lethal  intensity. Moments of wildness leap out from the dark textures, like the fragile candle that brought the prisoner hope. In this opera, the orchestral players are protagonists, and here the members of the Philharmonia were "singing" with individuality and verve.

Generic programme notes are worthless now anyone can search on Wikipedia. Fortunately, Misha Donat's programme notes are superb, informative and filled with the kind of insight that comes from genuine knowledge and experience. Notes like this serve a purpose other than to fill space. Donat describes Dallapiccola's use of dodecaphony, showing that twelve tone series and emotional truth are by no means incompatible. He also recounts the episode when Schoenberg visited Florence in 1924. Most people couldn't get his music at all. As Alban Berg said in 1933, "In Italy they are just discovering Richard Strauss". Two men in the audience, however, were fascinated. One was 20 year old Dallapiccola. The other, a terminally ill Giacomo Puccini, who'd driven 50 miles to get there.  Perhaps Il Prigioniero links to Tosca, of all things. It's exactly what happened to Cavaradossi, but Tosca hogs attention. NOW we know whty Salonen was so good in Dallapiccola (apart from the fact he studied the composer in his youth)  There's a new recording of Il prigioniero where Salonen conducts the Swedish Radio Symphony, LINK HERE
at January 27, 2012