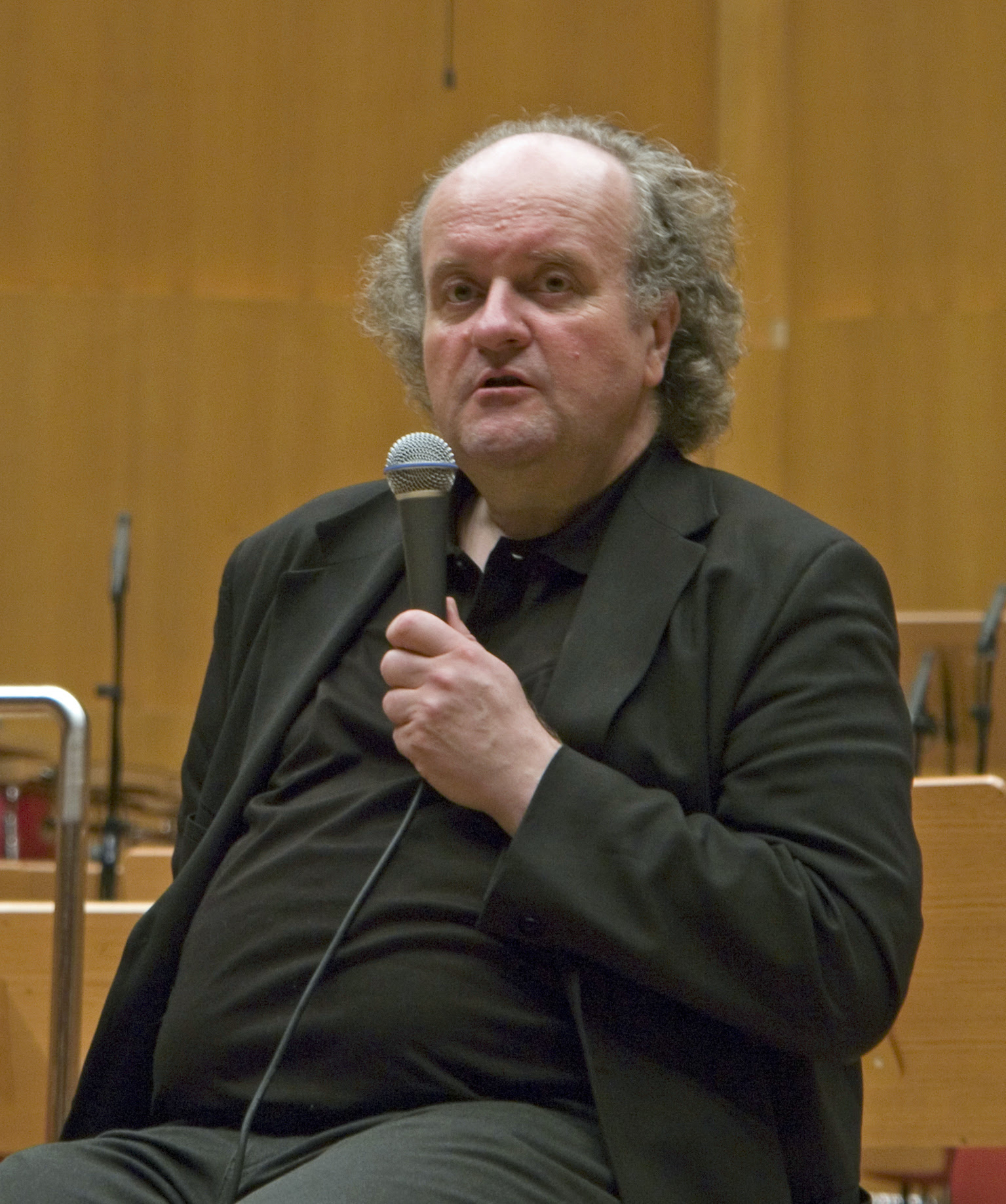 Eager anticipation for the London Sinfonietta's Wolfgang Rihm at 60 concert at the Queen Elizabeth Hall. Part of the disappointment was that it wasn't really "Rihm at 60" but a revisting of earlier works. That's not necessarily a minus since Rihm himself loves revisiting familiar work from a wildly new perspective.

Rihm's Nach-Schrift (Eine Chiffre für Ensemble (2004) is an outgrowth from the extensive Chiffre-Zyklus (recording here) written during the course of the 1980's. Chiffre means "cipher", so part of the fun is trying to discern how ideas disguise themselves. Score-studier's paradise. But Rihm himself is a natural anarchist, not a pedant. What's striking about his music is its joyous energy and vigour. In Nach-Schrift, (postscript),  do we hear the sound of rushing footsteps in that merry ostinato? It's as if the music were playing hide and seek, teasing us with patterns that seem to repeat but suddenly whisk themselves away when we grasp them. The xylophone keeps things light hearted, despite dense textures. Bright, strident trumpets and giant contrabass trombone. Low murmuring contrabassoon and clarinet, like mysterious voices of darkness.

Will Sound More Again (2011) (an outgrowth of Will Sound, 2005), comes seven years on from Nach-Schrift, and is much more densely orchestrated. Very firm structure, weighted down with tuba, contrabassoon, the winds extended by two cheeky saxophones. This time there's a sense of churning and turning, ideas reverberating  in concentric waves. This time there's a new figure in the landscape, struggling against the orchestra. Andrew Zolinsky let the piano taunt and trick, bright, lyrical lines bursting forth with joyous freedom. The orchestra's trying to encircle him but he won't be bound. The title? "Something will sound because it wants to", says Rihm in the notes. "The composer obeys the will  and the development and notates the spaces in between". Sometimes it flows undergound, but its trajectory and life-force are not submerged.

Rihm's Ricercare in memoriam Luigi Nono (1990) references Nono's ideas on spatial relationships. The small orchestra is arranged in a semi circle,  the usual instrument groups separated, with gaps between, and two percussion desks at each end. Elegant directional flow, high pitched sounds stretching upwards and outwards. Not vintage Rihm, but useful as a reminder of what he - and we - owe Luigi Nono for his concept  of music as invisible architecture.

This puts Rebecca Saunders Quartet (1997-8) into context, for Saunders is a master of music as sculptural  form.  She was one of Rihm's early students but early on developed a totally distinctive, unique style. Her music is almost tactile, as if the notes are tracing curves like fingers exploring their way around an invisble shape by instinct. Quartet is scored for an unusual combination of accordion, bass clarinet, piano and double bass so there's much more than the usual communal listening that makes chamber music so rewarding. The accordion is an ideal instrument for Saunders, as it's like the human body, breathing in and out through "lungs". Saunders's music has a deeply organic pulse, as if she's describing a body at sleep, anchored with a steady  heartbeat, but drifting in subconscious dreams. At times the accordion made sounds so ethereal they seemed to come from inside the psyche. Quartet rotates and turns, not like Rihm's churnings, but more intimate and meditative. Indeed, Saunders's music is more spiritually gratifying. once you understand where she's at. She's highly respected in her own right apart from the Rihm connection and has been a regular at the Proms and at Huddersfield.

Jörg Widmann, a much later Rihm pupil, has a high profile because he and his sister, the immensely talented violinist Caroline Widmann, have spent a lot of time in London and are well connected. The South Bank and Wigmore Hall have done a lot for Widmann, whose music fills a niche for audiences not yet ready for Rihm and Saunders. Dubairische Tänze (2009) is a series of 8 unconnected pieces over 18 minutes. A parody of Viennese waltz, of polka, of Bavarian oompah band, then novelty items like two basins of water being splashed about. A new kind of percussion but one that outstays its welcome within seconds. Perhaps there's a Rihm influence in the madcap mayhem of the later segments but they came over more as soundtracks for cartoons.  Unusual audience.There were well known composers and musicians  present, but also some who probably don't go out much. One woman read a newspaper throughout the concert, while another spent the whole evening playing games on an iPad.  Perhaps that accounted for the response - wildly enthusiastic applause and muttered murmurings.

Although I love the London Sinfonietta and once had an unbroken run of every single concert for five years, they didn't sound much like themselves this evening. Even though I wasn't listening from score (often the sign of a Beckmesser) some entries felt wrong and the overall dynamics somewhat muffled. Thierry Fischer, longtime conductor of the BBCNOW in Wales, has a strong interest in modern music but his approach seemed more suited to large ensemble than tight, small scale detail.

Lots about Rihm and Saunders on this site, please search. Rihm was the subject of a Barbican Total Immersion two years ago, which I wrote about here. .
at January 26, 2012