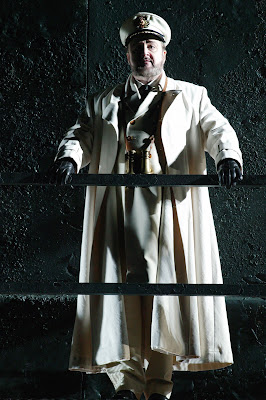 The ENO has a hit on its hands with its new production of Benjamin Britten's Billy Budd, now on at the Coliseum, London. Visually it's striking. Like the seamen, we're trapped in the claustrophic hold of the warship, "lost in the infinite sea". David Alden is sharp enough to know that Billy Budd isn't colourful costume drama.

Yet the moral dilemma Captain Vere faces in 1797 isn't black and white. It's so complex that he spends the rest of his life agonizing about what he might have done. Only when he understands what Billy means can he find deliverance. The Indomitable goes into battle stations but is defeated, not by the French but by nature itself and its envoloping mists. Indeed, against the wild forces of nature, the 'Indomitable' isn’t indomitable; it’s vulnerable, and can be destroyed by fate as capriciously as Billy himself is destroyed.What is the mystery at the heart of this deliberately opaque, emotionally reticent drama?

Why does Britten write music that churns and changes like the ocean itself?  Through the orchestra, the ocean takes centre stage, turbulent and intense. Huge crescendos build up like mighty waves, but even more impressive is the undertow of dark, murmuring sound that surges ever forwards. Above this, currents flowed diagonally across the orchestra, first violins flowing to brass and basses and back, just as ships lurch back and forth. You could get seasick if you focussed too hard, but that is the point, for Britten is showing that the “floating world” aboard ship is unsteady, far removed from the certainties of dry land. Just like the enveloping mists, all points of moral reference are hidden. The stark  monochrome of this set (designer Paul Steinberg)  is excellent, but it isn't enough on its own. 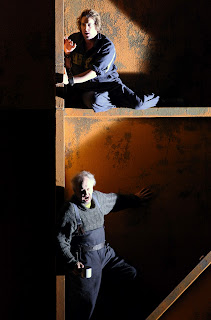 Billy Budd is metaphysical. There are numerous levels of meaning. Captain Vere is stymied because he can't interpret meaning. So it's up to a director to have vision, and to inspire the singers to express the complex nuances so fundamental to this drama. All this cast is experienced, and capable of responding to a much more intense approach. Kim Begley is a superlative character singer.  But he isn't called upon here to bring out the full character of Captain Vere. He's dressed in a white suit, like God, but Britten's written huge contradictions into the part. Vere is as vulnerable as his ship itself. He's a brave man but crippled by uncertainity and guilt. If he was godlike and confident he wouldn't be tortured by self doubt. Begley is luxury casting, but isn't asked to develop the more anguished side of Vere's personality.

Unlike Captain Vere, Billy Budd seems a straightforward character who doesn't question anything. Yet why is he so compelling that the crew adore him? Why is Vere fixated? Why is Claggart so discomforted by his presence?  This is a frighteningly difficult role because whoever sings it must convey things which Billy cannot say. It needs exceptional acting skill. Benedict Nelson sang Demetrius in the ENO Midsummer Nights Dream (see review here) but a role like that is no preparation for Billy Budd.  Nelson tackles Through the port comes moonshine astray carefully, but doesn't convey the extremely subtle way Britten writes contradiction into the aria. This is Billy's battle, but like Vere, he knows he can't win it when fate is against him. Billy loves life too much to lose it , but he sees goodness in small things, like the piece of hard biscuit Dansker brings him. Perhaps the secret lies in the personality of the singer, which is why Jacques Imbrailo seemed to radiate a truly transcendant goodness when he sang Billy Budd at Glyndebourne. Nothing can prepare a singer for a performance like that, and no-one should be expected to compare. 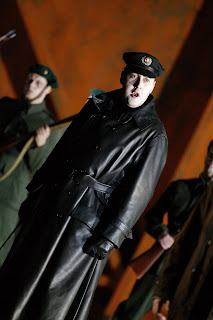 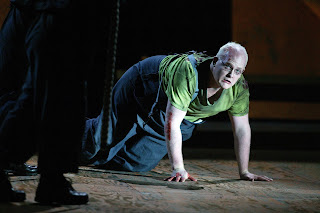 Matthew Rose sang a solid Claggart. He certainly looks the part, especially with pallid makeup, and has the ability to imbue the part with unhealthy menace. But here he's not called on to express the unclean sexual aspect of the role. Yet if he did, it might distort the production. The whole naval system is corrupt, based on brutality and abuse. Even Vere and Billy are complicit because they're part of it.  I cringe whenever I hear the Novice sing about having been "clever" until he was press ganged, because it shows how the system brutalizes decent people. Nicky Spence managed to make his Novice a strong portrayal, and deserved the applause that greeted him at curtain call.

Great cameos by Duncan Rock (Donald), Gwynne Howell (Dansker)  and the chorus, here well directed and blocked.  Unfortunately, the long horizontals on stage mean that much of the singing projects into the wings, its impact lost. Britten writes great variety into this music, but the quirkiness is underplayed. When Mr Redburn and Lieutenant Ratcliffe talk about the French, the exchange can be both comic and disturbing, for it shows how stupid those in authority can be. Here, however, the sharpness is muted,  Jonathan Summers and Henry Waddington singing correctly, but without the savage satire Britten's trying to point out.

The navy is institutionalized, and David Alden emphasizes the conformist monotony of life aboard ship. It's valid, and might have made Vere's questioning all the more distressing had the idea been followed through. Given the genteel politeness of David Alden's concept, it would not have been appropriate for Edward Gardner to have conducted with more lethal passion. This is a good production for anyone new to Britten and to Biilly Budd because Paul Steinberg's set focuses on the essentials. But ultimately, it holds fire and doesn't engage with the darkest aspects of the opera any more than the Indomitable engages with the French.  Billy Budd is a very dark and complex opera. It might be possible to direct a production where the true horror is exposed but it would make audiences as anguished as Captain Vere. That's simply not viable.

Please see my other pieces on Benjamin Britten, especially The Prince of the Pagodas, currently at the Royal Opera House.