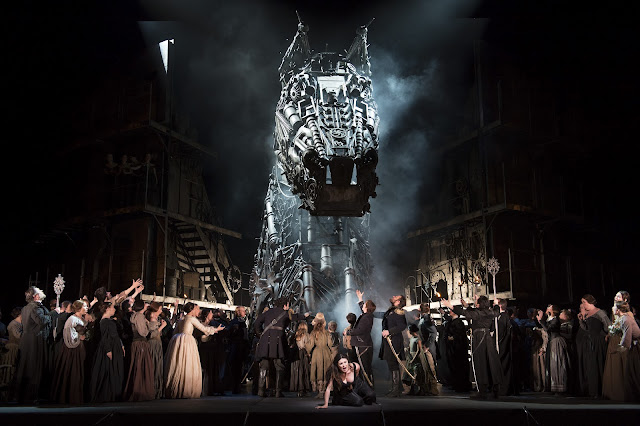 Sensational Berlioz Les Troyens at the Royal Opera House. Berlioz, who understood theatrical gestures so well, builds his opera around the most audacious dramatic device in ancient history: the Trojan Horse. The population of Troy delights in the spectacle, but then all hell breaks loose and the city is destroyed. David McVicar's new production is similarly audacious. The orchestra roars full tilt. Even the instrumentation is extravagant - the ophicleide wails like a strange monster. Then the Horse looms into view, moving in a surprisingly realistic way. its eyes shining as if the creature were alive, which adds a poignant twist. 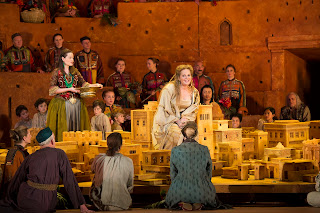 The Greeks and Trojans had much in common with the age of Napoleon III.  David McVicar and his team  (Es Devlin, Moritz Junge, Wolgang Göbbel), brilliantly captiure the expansive, extravagant spirit of Berlioz's time. France at its imperial peak, colonizing Africa and Asia. Paris was being rebuilt on a grand scale. Berlioz wasn't doing history re-enactment but writing to stun Paris with its audacity. His orchestration isn't the music of antiquity, but the most advanced and adventurous of its time. Berlioz isn't doing history re-enactment, and his audiences interpreted Virgil through the filters of Claude and Poussin.

Grecian pottery depicts figures with  minimal background: in Berlioz, the background is extreme and densely textured. The principals and secondary parts have to be strongly cast to stand out.  Berlioz writes psychological depth in the music rather than in the text, so a strong casting and good direction are of the essence. At The Royal Opera House, the singing and acting was superb, thus expanding the spirit of the roles for maximum dramatic impact. 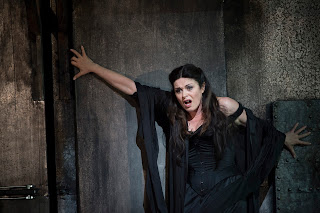 Anna Caterina Antonacci created the part of Cassandre with John Eliot Gardiner in Paris in 2003. She's pitted, alone, against the hysteria in the chorus, and the militaristic violence in the orchestra, but her voice holds its own and soars through with dark intensity. Cassandre and Chorèbe (Fabio Capitanucci) are counterparts to Didon and Énée, but Eva-Maria Westbroek's Didon and Bryan Hymel's Enée were more than a match for the sheer passion of their characterization.

Eva-Marie Westbroek sang Cassandre in the Amsterdam Les Troyens in 2011 (Pierre Audi). She's also a natural for the warm, happy Didon we see in Carthage (the desert city brilliantly depicted in multi dimensions so we get a sense of its teeming activity). This throws her portrayal of Didon's extreme grief  into sharp relief. When Westbroek sings of her anguish, the set is bare but for blue-grey curtain, the staging speaking for her as much as the orchestration. Westbroek's such a sympathetic Didon, we feel her agony. 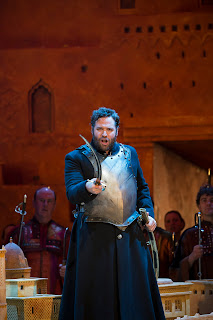 Bryan Hymel sang Énée in the Amsterdam production last year, and brings experience to the role. Anyone who bought tickets expecting Jonas Kaufmann would not have been disappointed. If anything, Hymel's bright lyric tenor suits the part better. In the duet "Nuit d’ivresse et d’extase infinie!"  he conveyed such beauty and sensitivity that he fleshed out the action man hero side of Énée, and the role became a real personality. Hymel's Farewell aria was stunning,  and ended with an exuberant flourish that was both heroic and tragic. The audience burst into spontaneous applause for the first time. Some audiences clap at anything, but this audience was far more sophisticated. You don't do a demanding five-hour opera unless you really care. Hymel is still only 32, and has years of potential ahead.

Brindley Sherratt's Nabal was powerful, setting the opera in context. Duty, fate and tragedy, love cannot compete except in death. Also outstanding was Ji-min Park as Iopas, singing the plangently lovely "O Blonde Cérès". Park is only two years out of the Jette Parker Young Artists Programme but a singer who should go far. Indeed, all the singing and acting was top notch, the entire cast on message, the chorus well blocked and expressive.

Coming from a background in Berlioz songs, I can't bear the bombast some like in Les Troyens, but Antonio Pappano's approach is more perceptive. He understand that what makes this opera work is its variety. Berlioz is flashing his virtuosity. The carnage music must be strident, but Berlioz writes music of surprising delicacy, and even humour. Pappano characterized the ballet scenes sensitively. These are important, not mere filler, for they set the context of the opera. Berlioz's Paris audiences would have liked this exotic orientalism had they heard it, for it fitted their image of themselves as rulers of North Africa and beyond. Wisely, McVicar and his team used the exotic theme in the set, where the "world" (ie the model of Carthage) floats in a magical cosmos of blue, green and red light, illuminated by stars. Perfect union of music, staging and meaning.

This Berlioz Les Troyens is an experience no-one should miss. Alas,  performances are sold out solid and you might have to pay way over the odds to get in. Luckily, it's being filmed and will be in cinemas in November and hopefully out on DVD. it's a milestone for the Royal Opera House and they'd be mad not to revive it soon.View it LIVE on mezzoTV on 5th July here  and hear it at the BBC Proms (unstaged)  from 22nd July.

HERE is a link to the online, international, free stream broadcast of the 5th July performance, with my review of the film version.
Photos copyright Bill Cooper, details embedded.
at June 26, 2012