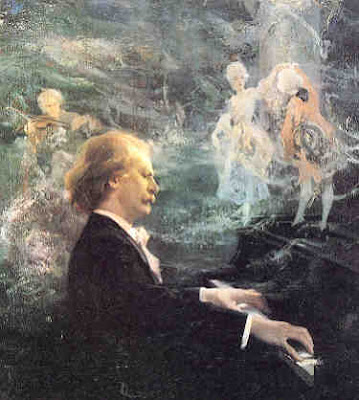 Ignacz Paderewski appears as himself in this 1937 movie, Moonlight Sonata (full download below).  Listen to him speak, talk, act and play. The movie is pretty basic romance with the pianist/politician/media celebrity incorporated to give the film a unique angle. Paderewski was 77 years old when this film was made and seems perfectly at ease. Watch his hands and face as he hammers the beaten up old upright in the childrens' hospital., while two girls dance. "That's the first time I've ever played dance music", he chortles.

At the end, Paderewski uses Beethoven to break up a young girl's romantic dreams. Is the irony lost on anyone?

This movie is also interesting because yet again it shows that until only very recently, musicians didn't have any hang-ups about being populist or doing crossover. "High" art wasn't separate from low: people could take or leave as they wished. Nowadays people like Katherine Jenkins, Alfie Boe, Lesley Garrett etc get viciously bullied because they don't conform to expectations. But bullying always says more about bullies than it says about the bullied. Snobbery is for fools. When Paderewski made this film, he didn't have to worry about his image. He knew that he had different kinds of fans, and that no-one needed to prove anything by watching or not watching, as they wished.  (see also the Richard Tauber/Jimmy Durante movie HERE).

Thanks a lot. Ignacy Paderewski has got an extraordinary personality. Excellet artist and beautiful human being