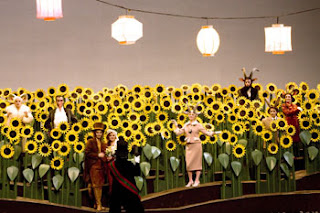 The Glyndebourne production of Janáček's The Cunning Little Vixen can be seen in cinemas and on the Guardian website on Sunday 10th. Janáček was inspired by cartoon illustrations, but the opera is by no means a cartoon opera. It's gloriously happy, but happiness does not preclude irony, or even much darker thoughts. The Vixen is captured and mistreated. She fights back and tears the Cock to pieces. She's red of tooth and claw, and "Red" in the political sense, too, because she tells the hen protelariat to revolt. In nature, animals are free, not institutionalized like hens in a coop.  There's nothing cute or infantilized about Janáček's Cunning Little Vixen.


Perhaps it's best not to know the opera when watching the Melly Still production, so it can be enjoyed on its own terms. But those who care about the opera, and about the composer, might want to delve a bit more deeply. Nobody needs to know an opera to enjoy it, but making judgements involves a bit more. Hearing the opera in Czech is essential, because Janáček's entire idiom derives from the Czech language, and its unusual stresses and sibilants. In English the music is castrated, and translations often try to be funny and soften the impact. Read the libretto carefully and hear how the edgy, angular music works against sentimentality. When the Fox courts the Vixen, he fancies her because she's a "Modern Woman, my ideal". He hopes she smokes! Definitely advanced for the era. "Foxy" in the modern sense, not a fox from nature. We know she won't survive because foxes don't and the trap is laid before our eyes. Then, when the Vixen dies, she's dead. The music rises again, triumphantly, when the Forester dies, because he's free now of stifling convention, at one at last with some greater cycle of nature. Whoever sings the Forester doesn't need a luxuriously Romantic voice: much better a singer with character and wit, because the Forester is a gruff, unfussy man. A lot like Janáček himself. Read John Tyrell's biography. It's long but genuinely erudite and perceptive, the essential Janáček tool. 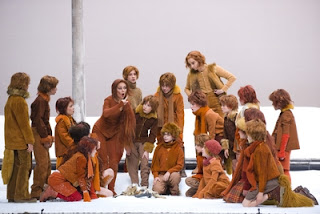 The Cunning Little Vixen is hard to stage because the characters are animals and act as animals do, but speak for humanity. In theory, dressing them as animnals is no big deal since it's plainly obvious that they are singing, and animals don't sing. By far more important is to understand what they are singing about. Each animal has a purpose. The Vixen grabs "Uncle" Badger's lair (itself an oblique allusion to several things). The Dog is sexually frustrated and denatured, just like the Schoolmaster and possibly the Priest. Sharp characterization above all, I think, so the fundamental grittiness of this plot and its music don't get lost behind the charm. Good filming probably helps too, because it narrows focus onto the personality of the characters, and cuts away irrelevant busyness.

Highly recommnded is the DVD of the Opéra Bastille, Paris production from 2008, directed by Don Kent. (get it here). Read Jim Sohre's review in Opera Today.  The animals are costumed as simply as possible, so they look like animals but not in a gimmicky way.The chickens in this production are dressed in colours like white hens, fluffed up and fussied. In the Paris production, the hens are surreal, because they are "un"natural. Watch how sharp their movements are, and how savagely the Vixen kills the Cock (even though we see no blood). The farmyard's a bit like a prison yard, which is how it feels for the Vixen. The passage of time and seasons is harmonized by a railway track which moves from the Forester's home out into woods and meadows.  One of the most memorable images of this production are the vistas of sunflowers, as perky and unreal as in a cartoon, but suggesting wide, open spaces, sunshine and endless horizons. Later, winter comes and the set turns white. The fox cubs prance about but look vulnerable against the stark horizon, a reminder of how easily they can be killed. Singing and orchestral playing good, too. So the more we listen and watch, the better we understand how the opera works. (Please see my many other posts on Janáček and on The Cunning Little Vixen)