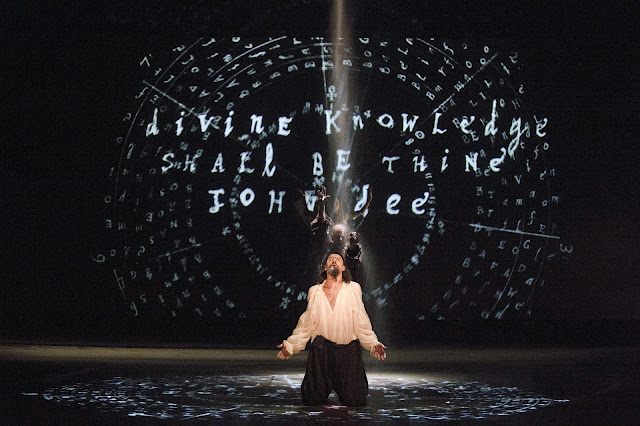 "There is no doubting Albarn’s genuine engagement with the eclectic idioms and musical sources which are juxtaposed in the score. Easy pop blends into pastiche Renaissance dance and song; African rhythms interrupt folk-derived modality. 16th and 21st centuries are juxtaposed and integrated; and, it’s true to say that the movement between them is pretty seamless. But, unfortunately, this is not generally because of formal dexterity but rather because the only thing that really distinguishes the idioms is instrumental colour and the odd harmonic ‘tint’ -a brief false relation or a tierce de Picardie. The melodic and harmonic language is unvarying and limited: progressions are repetitive and fairly stable, melodic phrases narrow in compass and confined in contour. Rhythmic repetitions cast a minimalist hue over the various musical shades. The result is that there is little dynamic drive within the music itself, and the work relies on vibrant choreography and technical effects for its forward momentum."

"Despite this rather negative account, I would not deny that there are some impressive visual motifs and virtuosic dramatic climaxes. The technical team have created some pyrotechnic wizardry of which Dr Dee would himself be proud: strikingly animated geometrical, algebraic and cosmographical light-shows which conjure up the mythical expanse and thrilling enchantment of the Doctor’s knowledge and creativity. Set-pieces are similarly imposing: Elizabeth I is raised aloft, her gleaming golden dress, an icon of the Golden Age, draped like a gilded curtain, embracing and inspiring her kingdom."