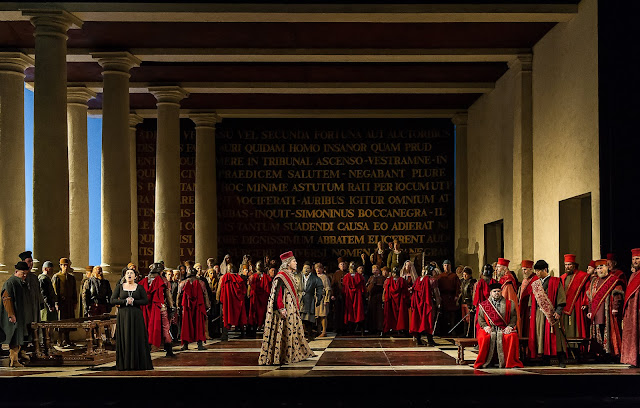 Thomas Hampson's first Simon Boccanegra at the Royal Opera House makes this revival of Verdi's great opera worthwhile. It's a role which suits a singer of Hampson's intelligence. Boccanegra has been Doge of Genoa  for many years. Boccanegra has survived because he thinks before he acts, and hides his feelings.
Verdi doesn't write the part with florid, crowd-pleasing arias : it's not Boccanegra's style. He’s a shrewd politician who lives on constant alert, surrounded by danger. Hence the austere vocal colour, cold steel and granite. Boccanegra reveals himself in declamation, not decoration, and in ensemble where he’s not exposed..Despite his power and wealth,  Boccanegra is isolated. Hampson's Boccanegra is a strong personality. He sings with dignified reserve, suggesting  a man weary of the world and its intrigues. ”When he finds Amelia, the voice suddenly warms. "Figlia!" sings Hampson with genuine tenderness. You can hear the years falling away, and imagine Boccanegra as a young corsair, throwing caution aside for love. His monologue “Ah! ch’io respiri l’aura beata del libero cielo!” is created with such feeling that we realize that power has brought Boccanegra no peace. Thus he can hand the future to Amelia and Adorno without regret.

Three years ago, Plácido Domingo shrewdly chose the role as his debut as baritone because the technical demands are not great. The challenge is in the acting. Hampson doesn't have to worry about the fach, which fits him naturally. He creates the part with sensitivity, showing the Doge as man and father behind the stoic exterior.

When Hampson and Ferruccio Furlanetto sing together, the balance is superb, better than when Furlanetto sang the part with Domingo.  Furlanetto sounds less youthful than he did before, which is more in keeping with the role,  but remains forceful.  The relationship between Boccanegra and Fiesco is perhaps even more significant than that between father and daughter. The two men have been struggling for decades. One is patrician, the other plebeian. Old authority is pitted against a new order. The  power struggle gives the opera dramatic tension. Thus when Boccanegra and Fiesco are finally reconciled and sing together, the impact is profound. Hampson and Furlanetto are two titans, confronting one another and finding equilibrium.

Russell Thomas was an impressive Gabriele Adorno. Adorno is young and hot headed, as Boccanegra once was. Verdi gives him several showpiece arias, and Thomas rose to the occasion, and was heartily applauded. The audience seemed almost entirely comprised of first-time opera goers, which is heartening.  He was last heard in London in March in John Adams' The Gospel according to the other Mary and in Donizetti's Belisario last October. He's no match for Joseph Calleja who sang Adorno with Domingo in 2010, but he's still young and promising.

Hibla Gerzmava made a pleasant role debut as Amelia, her voice particularly effective as the more mature Amelia in Acts II and III. Dimitri Platanias was a good Paolo Albiani, more relaxed and spontaneous than when he sang Rigoletto in 2012. Jihoon Kim made Pietro feel more than a minor character.

Although the orchestra seemed somewhat restrained at the beginning of the Prologue, it ignited, perhaps appropriately, when the citizens of Genoa proclaimed Boccanegra as Doge. Antonio Pappano is particularly good in this repertoire, capturing the fiery crowd scenes with great gusto. His command of subtle detail was even more perceptive. When Amelia sings the cavatina "come in quest'ora bruna" the childlike nature of her song is contradicted by the turbulence in the orchestra, as if Verdi is hinting of hard times ahead. When Boccanegra sings  “Oh refrigerio!... la marina brezza!”, the strings oscillate eerily. Boccanegra remembers his youth, but this breeze is sinister, foretelling death.  Pappano’s feel for the hidden depths in this opera manifested itself in the way he brought out the strange, wavering textures in the orchestration. Tragedy hangs on this opera like a shroud. Boccanegra's brief period of happiness with his daughter precipitates his death.  Yet Verdi writes with cool-headed stoicism. Sparse textures, solo melodies, intense restraint, as strong -minded and unsentimental as the Doge himself.  In Act III, the juxtaposition of wedding chorus and execution march is strikingly destabilizing.  Happiness is a brief illusion, inevitably doomed.

Since this production has been revived over 100 times, it’s almost superfluous to comment, but theatre is as much part of an opera as singing. Otherwise we’d stick to concert performances. The sets, designed by Michael Yeargan are beautiful, but also astute. The marble floor resembles a chessboard. Marble is cold and unyielding, like fate, and power politics in a troubled city state is a game of strategy. Immense doors and marble columns loom over the protagonists. Special mention should be made of the lighting design, by John Harrison, where the same set can be transformed to create different scenes and moods.

This is a very painterly production, inspired by Renaissance painting and architecture. Written words appear on upright surfaces : sometimes in gold and fresco-like in Latin, sometimes roughly scrawled graffiti in Italian.  Literally, “The writing is on the wall”.Yet beauty alone isn’t enough, as Verdi himself was to say of this opera. Fundamentally this isn’t a decorative opera, but an opera about extreme but repressed emotion.. The weakness lies in the direction. Physical action seems oddly lethargic and stilted. as if the parts are stepping out from a painting. It works, if you think of the production as a scene in a frame on a wall in a marble hall. When Amelia and  Boccanegra recognize who they are to each other,  the orchestra wells up, but the encounter is suprisingly matter of fact. Fortunately, the cast is so experienced that they can create their roles almost by instinct.

A full version of this review plus cast list is on Opera Today
photos Clive Barda, courtesy Royal Opera House
at June 28, 2013