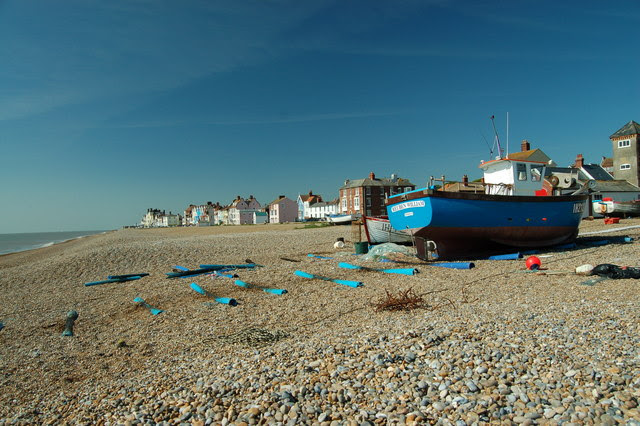 Claire Seymour, author of The Operas of Benjamin Britten,   the essential text on the subject (which you can buy at Snape Maltings), reviews Britten's Peter Grimes at the Aldeburgh Festival in Opera Today.  "....there was nothing ‘conservative’ or ‘run-of-the-mill’ about the performance, led by a dynamic Steuart Bedford, who urged his instrumentalists and singers through an intense, urgent reading of the score; this may have been a concert performance but there was more drama and concentration than is sometimes found on many an opera house stage."

A CD is in the offing. The Guardian predictably makes more of the novelty of Peter Grimes on the Beach, the open-air performance this weekend, where the singers will be amplified and the orchestra will be a recording. This ought to be fun because you can't get a more "authentic" staging.  Britten drew inspiration from the natural surroundings. We hear the sea in all its moods in this music, so vividly that we can almost feel the rain and salt spray and smell the algae. Britten lived in Crag House, his study window opening straight onto the sea. At Aldeburgh, the fishing boats are launched straight off the beach from ramps. If you walk on the shingle, as Britten did, you are in among the boats and the fishermen. They aren't isolated in quays and harbours. The North Sea howls onto the beach: no barriers, no protection.  For me, this is the essence of Peter Grimes and indeed of Benjamin Britten. Peter Grimes on the Beach may not be best way to hear the music, but it will be a unique experience.

As for me, I'm at Orford for Curlew River and the other Church Parables. These will also be atmospheric as they were conceived for Orford Church, the setting integral to the operas. Britten's Church Parables will also be performed at Southwark Cathedral as part of the City of London Festival (details here).  In September, Stuart Skelton will be singing Peter Grimes at the Royal Festival Hall. Skelton is a consummate Peter Grimes and has done the role many times. This will be a highlight of the year.

I've beenn thinking a lot about the role. There is no reason Grimes "has" to be old and gruff. Troubled souls can be any age. For all we know, Grimes had been abused as an apprentice. Perhaps he's re-enacting the brutality he received as a child. He knows no other way. Given a choice he might not have been a fisherman at all, but comfortably indoors, knitting and embroidering. Which makes one wonder about the dynamic between Grimes and Ellen Orford (note the name). Who would be the man in the house if they marry? Does Ellen really love Grimes or is she projecting her conventions onto him? Grimes is much more isolated and misunderstood than we think. Maybe he realizes that he's better off dead than with her or with society. We're bound by tradition to expect the role to be played in a certain way, but the score itself suggests we should consider more senitive singers  than the usual type. Musically, too, we'd be much better off.