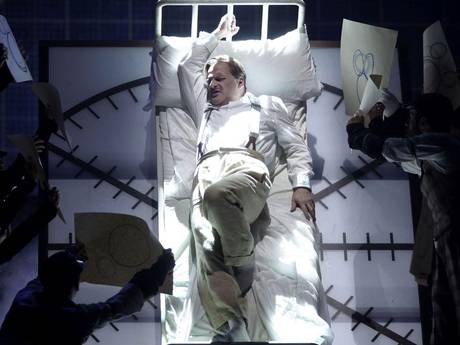 Philip Glass's The Perfect American at the ENO Coliseum is a visual treat, but the libretto is mind-numbingly anodyne.  This is not classic Glass, but some plastic imitation. Walt Disney's life would make fantastic drama.  Phelim McDermott and Improbable give us wonderful visual images. But Glass and his librettist Rudy Wurlitzer seem to have lost the plot. The Perfect American should have been a silent movie.

As Disney discovered, cartoon characters come alive when they tell a good story. Cartoons are static images, thousands of frames meticulously drawn by hand. They only come alive when a machine runs them in sequence. Movement is illusion. Glass's music can work as drama. His whirring repetitions suggest the mechanical processes used in film. We can "hear" whirring of the camera, and imagine the way individual cells of film are transformed when the projector rolls. Glass makes the connection between cartoons and trains. Both run on tracks, both are inanimates transformed by machine. Thousands of illustrators worked on Disney's films but their work only became art when he processed it. In theory, Philip Glass could have made good music to fit the subject. But even by his own standards, The Perfect American feels like a tired rerun.

There's nothing wrong with repetition per se, but here it's an excuse to pad out a marginal story line. The Perfect American might work as drama if it were cut down to, say, 60 minutes, distilling it down to the essentials. Glass's In the Penal Colony was powerful because it was so tightly written. You felt like you were inside the infernal machine operated by a demonic entity. It even works as pure music, though the Music Theatre Wales staging was superb. (Read my reviews here and here). This is minimalism free of danger or meaning. It's quite pleasant in its own way, an ideal alternative to sleeping pills or a shot of whisky before bed. But Glass needs focus to concentrate his mind from wandering. Listening to The Perfect American without visuals would, I think, be torture.

The Disney Corporation refused to allow the use of Disney images in the production, but Phelim McDermott gets round this by showing the camera. Its round reels look like Mickey's ears. The projection shaft looks like a mouth.. Just as Disney anthromorphised animals, McDermott turns machine into Mouse. Improbable's group sequences are always notable. The chorus moves like a  single organism made from many parts. The chorus helps the figure of Abraham Lincoln move, like a puppet on strings. The political allusions are valid, but curiously undeveloped. The libretto flits from idea to idea without depth or perception.

If Glass were to save The Perfect American as drama, he's be wise to stick to a few strong images and ditch the less relevant. Lincoln (extremely well realized by Zachary James) is worth keeping because McDermott shows him so well, but Disney and Ronald Reagan are innocent indeed compared with the machinations of modern politics. Andy Warhol (John Easterlin) is a character worth saving because Warhol and Disney had so much in common.  If Glass's focus is on Disney as visionary artist, there's a lot of potential.  But the libretto is fatally diffuse.

Christopher Purves sings Walt and David Soar sings Roy Disney. Good performances but the script lets them down. Both singers have enough musical nous to sing their lines so they flow better than what's in the subtitles. Sometimes, Glass's problems with text work out fine because they emphasize meaning. Mechanical expression squashes human speech. In The Perfect American, the text is just plain dumb. These roles are central. Both Disney brothers were visionaries in their own ways. Whether you like multinational corporations or not, they helped create the genre.  Perhaps Glass and his librettist were inhibited by fear of litigation. But the Disneys were remarkable people: the Disney Corporation has nothing to fear. Especially not from a work as inept as this. There is one spark of perception in the text. The Disneys are "hiding behind a mouse and a duck". But that's all. Then the moment is gone.

Soar is an interesting singer, much admired since his early days at WNO. Hopefully we'll hear more of him at the ENO. Donald Kaasch sings William Dantine, the employee fired for organizing a union. As "evidence" that Disney mistreated his employees, it's pretty weak, since far worse things happened and happen still. The Lucy/Josh character (Rosie Lomas) is bizarre. If Lucy is an apparition based on the ghost of an owl Disney killed as a child, there's potential in that too, but the role is so badly drawn (by the librettist, not the singer) that it's a waste of time. We don't really need to know so much about how Disney loved nature. But as my friend exclaimed. "Disney wasn't Janáček!".

An opera that would have been better as silent film? The irony would not have been lost on Walt and Roy.  It doesn't matter how you tell a story as long as you have a story to tell in the first place.