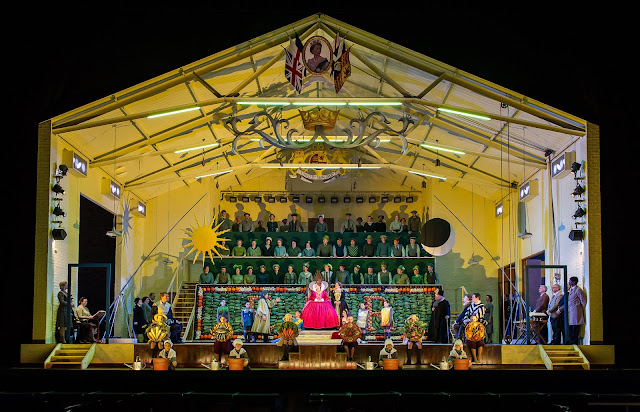 Bright Britten Gloriana at the Royal Opera House. What might Britten really have meant when he celebrated the grand public Coronation of a new Queen with an opera which connects power with illusion?  Played straight, Gloriana might seem yet another ceremonial pastiche flattering the Establishment. But clues to Britten's motives lie embedded in the music. Is Britten, like a Court Jester, the man who tell home truths under the guise of charm ?

"Who threw the gauntlet down ?" asks the Earl of Essex, (Toby Spence) hearing the sound of a joust in the background.  Is Britten throwing us a coded challenge? Instead of looking for himself, Essex relies on others to tell him what's going on. He's a a jealous upstart who rises because he can flatter the Queen.(Susan Bullock). Hence his exchanges are oddly repetitive and unoriginal. Britten is drawing character with such subtlety it might easily be missed. And why is an intelligent woman like Elizabeth I so easily fooled? Britten knew Elizabethan music well. So when he makes Essex sing doggerel, he makes a point. "Quick music is best when the heart, the heart is oppressed. Hallaloo, Hallalay, ha-a-a-a lalayah !" In this context, the long masque and dance sequences take on grim significance. They are circuses for kings, escapist pursuits that lull the public into subservience.

At Court, the aristocrats flatter the "Red Rose" that is the Queen, comparing themselves to "green leaves". In prosperous but provincial Norwich, the locals put on rustic pageantry. Maidens and Swains dance to songs so twee they'd be embarrassing, even for yokels. The long scene at the Guildhall in Norwich can drag but conductor Paul Daniel shows how the details are more significant than the showpieces. A sour trombone groans as the elderly Recorder of Norwich (Jeremy White)  falls as he tries to bow. "Tedious!" sneers Essex. But the Queen puts up with the locals because it is shows like this that maintain her authority. Is the Queen really fooled by flattery? The lavolta is charming, and gives the members of the Royal Ballet something more substantial to dance to. But for the Queen, it's a ruse to make her ladies sweat. Grotesque brass passages suggest disgust and menace. When the rabble erupt onto stage, the music sounds vigorous and direct. Bad news in Ireland is announced in the City before it reaches the court by a Blind Ballad Singer (Brindley Sherratt).  His music is hideous, for he suggests disorder and the collapse of the system. Yet he's also Beckmesser, connecting to the jealousy, pettiness and falsehood in the opera and in the background of its genesis.

Benjamin Britten himself haunts this production. Perhaps it's significant that Paul Daniel also conducted Phyllida Lloyd's film Gloriana (reviewed here). Richard Jones takes up the theme of performance and illusion. We see the mechanics of stagecraft.  Boys carry placards that spell out the places scenes are taking place in. Workmen change props on stage. We see singers stumble over badly positioned steps. Arc lights are positioned in the orchestra stalls. Amateur dramatics? The clumsiness is deliberate. Britten grew up in a world where ordinary people made theatre. At Aldeburgh, he probably did more for community opera than anyone has done since the Middle Ages. Gloriana is an infinitely more sophisticated Albert Herring. We see a figure in silhouette who looks and moves as Britten did.

Ultimately, though, Jones connects to perhaps the darkest theme in the opera, that power is the art of illusion. The Norwich scene is crucial because it shows how ordinary people are complicit in power politics. The "green leaves" the courtiers sing of are translated, literally, into "green leaves" in a wonderfully-staged tableau depicting the kind of village vegetable shows that were once so popular when people grew their own food.  In 1953, people still believed in wartime austerity. The good folk of Norwich line up regiments of marrows, battalions of cabbage. How Britain has changed!  One of the amateur dramatics effects shows a giant pot where missionaries are cooked, small boys blacked up to look like comic book figures from the past. Then we catch glimpses of a real, adult Black man looking on from the wings. Empire is no longer an "exotic distant place" Elizabeth dreams of, but our present.

Susan Bullock sang Elizabeth. This is a role that requires, above all, the ability to project personality. Sarah Walker, a mezzo, carried it off  well for Mark Elder (aged 34!) in 1984, but Britten wrote it for soprano, so the higher timbres cut shriller and more sharply. Bullock was saved the indignity in the scene where the Queen is seen exposed, bald and old. In other productions, this can be shattering drama.  Here the full impact is rather muted. Britten reserves his last irony for the end. "Mortua!" sings Bullock, as Elizabeth faces death. At this critical junction, Elizabeth no longer sings. Bullock declaims, as actress.  Toby Spence sang the Earl of Essex and Mark Stone sang his rival the Earl of Mountjoy. Perhaps there's another subtle Britten dig : none of these roles is a "Big Sing", not even Elizabeth, which showcases the singer's acting skills not her vocal technique. The biggest"sing" is the Blind Ballad Singer  where a good singer has to sound bad !.

Claire Seymour has reviewed Gloriana at the Royal Opera House in Opera Today. Read  HERE. That's authoritative. She's the author of The Operas of Benjamin Britten and an extremely perceptive writer.


The performance on 29th June will be broadcast LIVE online on BBC Radio 3.