Rossini's Maometto Secondo is a major coup for Garsington Opera at Wormsley, confirming its status as the leading specialist Rossini house in Britain. Maometto Secondo is a masterpiece, yet rarely performed because it's formidably difficult to sing. It's a saga with some of the most intense music Rossini ever wrote, expressing a drama so powerful that one can understand why early audiences needed "happy endings" to water down its impact. Maometto Secondo has the potential to become one of the great operas in the repertoire. Richard Osborne, the Rossini scholar, describes it as the grandest of Rossini's opera seria, "epic in scale and revolutionary in the seamlessness of its musical structuring". We are fortunate that we saw it first in Britain at Wormsley.

Maometto Secondo, or Mehmet II, Fatih Sultan of the Ottomans, captured Constantinople, and ended the Byzantine Empire. This Turk was no buffo. His next ambitious plan: to conquer Rome, thereby linking Europe and Asia under Islam. Mega geopolitics. Venice was the front line because Venetians traded throughout the Eastern Mediterranean. The  Ottomans  posed a genuine threat to survival of the Italian region. Rossini's audiences knew that Negroponte fell and its occupants were massacred.  Mehmet asnd the garrison commander, Paolo Erissso, existed, but the opera is not based on historical facts. The plot resembles La donna del lago,. Both foreign kings in disguise are called Uberto,  and both offer tokens of safety. Indeed, Rossini simply lifted the aria "Tanti affetti" from La donna del lago straight into the 1823 Venice revision of Maometto Secondo . So much for historical specificity. 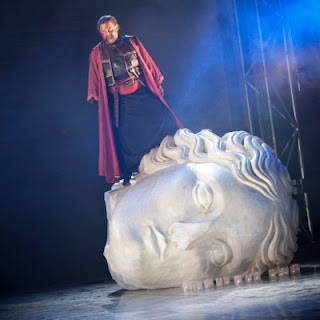 It is pertinent that Rossini wrote Maometto Secondo while Naples was occupied by the Carbonari, a volatile, violent secret society dedicated to revolution.  The opera bristles with danger. A confident melody suggests happy memories, but the garrison is under siege. Rossini's vocal lines tear up and down the scale, but the long, difficult runs aren't there for ornamental display. The singers are pushed to the edge, just as the characters they portray. Technically, the musicians are in control, but dotted rhythms and coloratura extremes can suggest palpitating heartbeats, or muscles on alert. Rossini doesn't let the tension subside. Erisso, Anna and Calbo sing a long terzetto which is interrupted by the sound of cannon. Suddenly, Maometto materializes, high above the melée. "Sorgete: in sì bel giorno" is cavatina as theatre.

The melody that opened Act One appears again at the begiining of Act Two. This time, the women of the harem sing of sensuous joys. Anna, having been raised strictly in "tanti affanni d'una rigida virtù"is sorely conflicted. She loves Uberto for what he represents but is duty bound to reject him as Maometto. The struggle between Anna and Maometto is tense because Anna comes very close to surrender. Rossini balances this by giving Calbo the Venetian an aria so stupendous that Anna's decision to marry him seems perfectly plausible. Calbo's "non terrer, d'un basso affecto" is bravura designed to demonstrate bravery.

Rossini prepares us for Anna's sacrifice by introducing a new theme with long brass chords and flurrying woodwinds. Anna's music must seem almost impossible on paper. This is coloratura on a grand scale. It is a compelling reason for using the new Hans Schellevis critical edition of the 1820 Naples original. The best-known recordings conducted by Claudio Scimone both use the 1822 edition, Rossini's sop to Venetian audiences who didn't want suicide on stage.Anna has to sing almost continuously for half an hour with brief respite when she's supported by the female chorus. Each show-stopping section is followed by another. It's hard to imagine going back to the compromise Venice edition after hearing Naples.

David Parry conducted with verve and passion. His musicians are dedicated and carefully chosen, but the orchestra comes together for a short period during the early summer, though perhaps the same could be said of Pesaro.  Parry gets good results from his orchestra, but one wonders how much more thrilling this music would sound with a more sophisticated orchestra.  He's good with voices too, inspiring commitment. On paper, this score must look almost impossible to carry off. Performances all round were good. Just getting the notes is an achievement, but these singers added personality to what they sang.

What a role for Siân Davies to make her European debut!  Her "Giusto Ciel" showed the innate colour in her voice, and the final scene showed her stamina. Paul Nilon sang Erisso. As an actor, he's more convincing than Scimone's tenors, both of whom looked too young for the part. Darren Jeffery sang Maometto with a sense of presence.  Caitlin Hulcup's Calbo, however, was outstanding. She has a remarkably flexible voice, particularly lustrous in the lower register, so the extreme range in the part elides gracefully. She also moves with energy, not always a given in trouser roles.  She's very experienced. As I listened, I remembered hearing her before as Arbaces in Thomas Arne's Artaxerxes at the Royal Opera House.

One day, perhaps, a larger and much wealthier house can do Rossini's Maometto Secondo full justice, and we might get Joyce DiDonato or Juan Diego Flórez.. We can but dream. Until then, we can cherish the memory of Garsington Opera at Wormsley's sterling production.