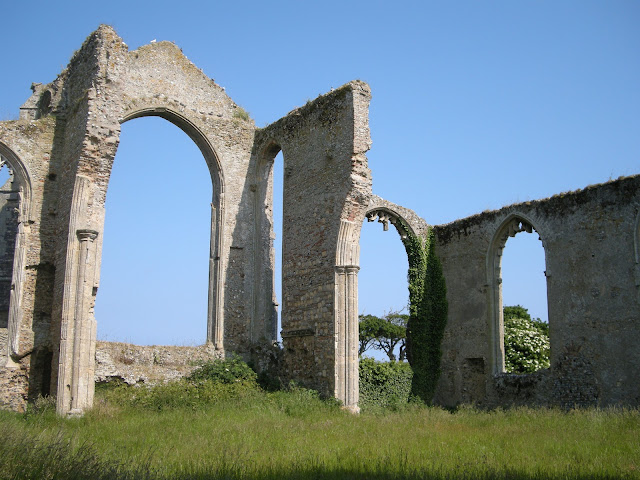 Peter Grimes on the Beach might have attracted gimmicky interest, but the Church Parables were by far the true artistic highlight of this year's Aldeburgh Festival. The Parables were written specifically for Orford Church. It's important to experience them in this context to really understand their spirit. All around Aldeburgh, ruins remind us of a time when abbeys and churches were outposts of learning. Then came the Reformation, and they were destroyed, burned to the ground in a frenzy of hate .The ruins might look peaceful now but once they witnessed howling mobs hell bent on annihilation. Britten wasn't religious but he despised mob rule and barbarism. The Church Parables aren't really Christian. They are a protest against the destruction of civilized values. The stark white-washed walls at the church in Orford bear witness to violence, but their foundations are strong and have lasted a thousand years. Hearing the Church Parables here adds meaning.

Britten's fascination with non-western music had very deep roots. He worked with Colin McPhee, the pioneer of Indonesian music. Here is a clip from a recording made in 1941, where Britten and McPhee play a transcription of Balinese music for two pianos.  By the time he actually visited Asia he was well aware of the new horizons non-western music could offer. Curlew River springs directly  from the Japanese Noh drama, Sumidagawa River, but it was also a vehicle for Britten's own profound sense of alienation. "I can't write Japanesy", he said. Curlew River isn't pastiche, but reflects ideas long germinating in Britten's psyche.The strange keening lines and swooping cadences can be heard throughout his work, from Our Hunting Fathers to Death in Venice.  Read my piece on The Prince of Pagodas here, and many other pieces on Britten and non-western music. Britten was far more radical than we appreciate. 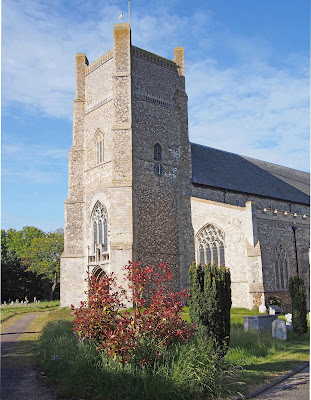 In Curlew River, Britten connected the formalism of Japanese theatre with the rituals of Catholic liturgical music. Neither form was populist, both the esoteric preserve of an educated minority. Yet Britten, with his passionate belief in communication and in the community, also incorporated elements of medieval mystery plays, where complex ideas were expressed in simplified form. The characters in Curlew River are larger than life, almost symbolist archetypes, and the music they have to sing is extreme. Nowadays. we're so used to naturalism in film and theatre that we forget how recently it took hold.  By eschewing naturalism, Britten connects Curlew River to much more ancient traditions.The stylized ritual also serves as a an emotional mask, distancing the artists from his audiences. This reticence can be off-putting, Britten isn't touchy-feely. But his emotions are so intense that they have to be faced obliquely, as if through a mask.

Curlew River is the best known of the three Church Parables, but at Orford, the connections were enhanced by using the same cast - James Gilchrist, Lukas Jakobski, Rodney Earl Clarke, Samuel Evans, and Mahagony Opera, directed by Frederic Wake-Walker, with designs by Kitty Callister and lighting by Ben Payne. Roger Vignoles was Music Director, conducting the Aurora Orchestra from the chamber organ. The musicians played wearing  monastic costume, and barefoot, like the players on stage. That kept them warm on a cold night, but was also part of the meaning. Like the Pilgrims, like the spartan church, the music is deceptively simple: steady percussion, delicately ethereal figures. Curlew River begins and ends with processions, sung by the monks, framing the strange drama within. At Orford, the singers chant in Latin, followed by the orchestral players, holding their instruments. All are barefoot, their feet in contact with the earth.

James Gilchrist sang the Madwoman. His voice curled around the long, wailing syntax, each tiny nuance dripping with purpose. "I come from the Mo-o-o-o-u un-n tains"  Gilchrist's syllables are razor-sharp. His consonants extend like wailing cries  which could carry over great spaces. Britten's lines imitate the call of wild birds, and curlews in particular,  Orford rises from marshland and reedbeds. Nature is embedded into the opera, reinforcing the non-naturalism of the music.

Gilchrist wears a costume vaguely like the hood a Japanese noblewoman might wear, but it also resembles a shroud. Faint pink tones colour the white gauze of mourning. Do they suggest fallen cherry blossoms or blood? The part is ambiguous, for good reason. This isn't a part for singers who can't take risks. Ian Bostridge is singing the part at St Giles Cripplegate (Barbican) on November 14th-16th, definitely something to look forward to. Bostridge is arguably the best Britten singer of our time, and Gilchrist comes very close. Both are intelligent artists, their skills sadly under-valued by those who prefer safe and bland.

The staging was as compact as the music is spare. The stylized gestures exactly follow the notes in the orchestra,  To create the image of a boat, the pilgrims stood together, moving in unison. Bobbing up and down they suggested the movement of a boat on choppy waters. They stand on a small platform above the Madwomen. Their faces are lit from below, so their features take on a surreal cast . How frightening they must have appeared to the Madwoman, the outsider, desperate for news of her son. The spirit of the Boy appears, as a Redeemer. He suffered, but his death serves as inspiration to those who pass by his grave.  At Orford, the boy is visible, backlit by golden light, and more plausibly some kind of Christian holy figure, keeping faith with the monastic context. The monks of Reformation Suffolk may be gone, but their spirit lives on.

This production by Mahogany Opera has been heard at The Hermitage in St Petersburg and will be travelling to London as part of the City of London Festival, and then to the Buxton Festival.