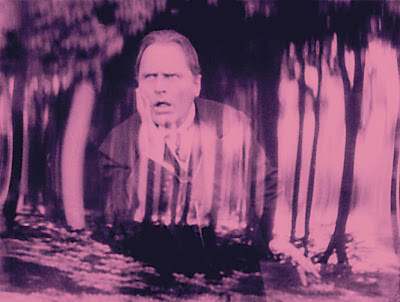 Nerven (Nerves) was made in 1919, a year before The Cabinet of Dr Caligari. Nerven is even weirder than Caligari but isn't nearly as well known. It wasn't a box office success, and the director, Robert Reinert, died poor in 1925. The film still hasn't been restored in its entirety but what remains is enough to suggest that Nerven is an amazing example of Weimar Expressionism.

"Glückliche Kinder, die Ihr noch nichts von Nerven wißt!" "Nerves" meaning panic attacks, intense emotions and delusions. The Prologue, like an Overture, shows a madman murdering a woman, then stopping to give water to a bird in a cage "Poor creature, without water it will die". Images of chaos and nudity give way to the formal opening of Act One. Business magnate Roloff announces to his shareholders that he's invented a machine that will make them masters of the world. He stands alone, framed against rows of men in business suits, but cries "Die Fahne hoch!" the rallying cry of Socialism. Suddenly  the factory is destroyed. There's rioting in the streets. Johannes the Teacher addresses the crowd, He connects social unrest to war and inequality. Do we see a flashback of Johannes walking through a pile of corpses? Or is Johannes thinking symbolically? A naked man wields a sword over other naked men.

The film then cuts back to Roloff's palace, where his sister, Marja, is about to marry a Graf, though her heart is elsewhere. Roloff visualizes Marja being raped by Johannes and testifies in court. He's convicted though, because his blind sister's attempt to save him backfires. Marja tells her brother that she was only possessed by Johannes' idealism and leaves to work with the poor. Overwhelmed by guilt, Roloff thinks he's going mad. There's a fantastic sequence where he sees the marble floors of his palace awash with blood. He wanders through a landscape of superimposed images. (see photo above)  Is he in a forest or is he being pursued by the dead? He thinks he's murdered Johannes, and his wife collapses. Is she upset that Roloff's mad, or is there something else?

Johannes is released from prison. Roloff has a vision in which he thinks he's murdered his wife, Elisabeth. There's another fantastic "psychotic" sequence in a speeding car. He begs Johannes for forgiveness, and for poison. "Euthansie". Now it's Johannes's turn to hide a secret crime.

Out on the streets again, Johannes tries to curb mob violence. In a pointed reversal of the image of Roloff standing before his shareholders, Johannes tells the crowd "Arbeit ist Macht!" ie progress through new values based on healthy, natural living. "So wie ein Mensch, der nicht arbeitest, an Lieb und Seele verkommt, so muss ein Volk untergehen, dass nichts arbeitet". Hardly words to appeal to audiences in 1919 facing mass unemployment. Marja and her Graf have become intolerant streetfighters, distorting Johannes's non-violent ideals. The film doesn't make explicit the connection between this and the Freikorps and Socialists, but Germans in the upheaval after the First World War would hardly need reminding.

Elisabeth, Roloff's widow, leaves the palace, just as Marja did, and goes to live with Johannes.  They've been in love for ages but the idyll can't last. When Elisabeth realizes that Roloff committed suicide to free her, she sees that as a form of murder. Now she goes mad in turn, burning the palace to the ground. The servants flee. More shots of chaotically moving figures. Johannes braves the flames to save Elisaeth. But his faithful dog tells him that the blind sister is trapped in the burning mansion. The dog appears at several critical points in the story, literally "pushing doors open". Like the blind sister and the tame deer in the deer park, the dog is a symbol of innocence and positive action. It's worth watching the scenes where the dog runs round the burning palace, his paws on the balcony railings.

The blind sister dies. Now Johannes and Elisabeth have both caused the death of others. She enters a convent. In the city, there's rioting. Marja's Graf confesses that he didn't believe in the ideals he and Marja fought for. He'd given everything up for love. Marja dies next. "Ist alles Lüge auf der Welt? Auch die Ideale?" Truth and delusion, reality and madness. Roloff's psychosis was a symptom of what was happening in the world around him.

Although much is made of war imagery in this film, the theme of religion is just as significant. Johannes, is a quasi-Jesus figure. Roloff's palace looks like an elaborate cloister, and there are small details, like Christ's feet impaled on the cross in the background when a young gardener is killed by a Freikorps-like militia.

In Epilogue, Johannes goes  to the convent and declares love and forgiveness for Elisabeth. They walk arm in arm into the garden but suddenly Joihannes throws his arms in the arm in a grand gesture. Is he falling to the ground? Has he been struck by insight or by a heart attack? The only hint is an intertitle "Von der Gesundung der Menschheit....."

Once again "reality" dissolves. In the next frame, a semi naked man and woman (not Johannes or Elisabeth) are seen climbing up a mountain. The man raises his hands as Johannes did, saluting a glorious panorama of alpine peaks. The man and woman, now both in loincloths embrace. "Stammeltern eines neues, glücklichen.Geschlechts werden". A pagan Adam and Eve? A couple are seen ploughing an alpine pasture with their ox. "Zurück nach Natur!: Arbeit!....Neue Nerven, neue Menschen!"  Are fresh air and exercise a cure for"nerves" ? Perhaps. Compare this film  to G W Pabst's Secrets of a Soul (Geheimnisse einer Seele) (1926) (read more here)  which doesn'tb really endorse talk therapy, however much psychoanalysts might want it to.
at June 25, 2013