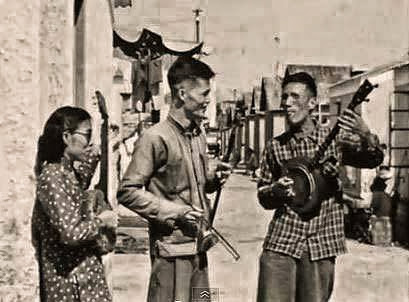 Three blind musicians. One plays an erhu, while his friends play a banjo and another a type of Chinese lute. When I look at this photo, I think about who these people might have been. All I know is that they were refugees in a camp in Macau in 1948. Before penicillin and proper health care, blindness was common in China, so blind people often trained as musicians or story tellers. They'd perform in tea houses, mahjong clubs, at private parties and on the streets. The music they played was improvised along traditional and popular tunes. The more skilled, the more inventive. These three can't have had an easy life as the area they lived in had been occupied by the Japanese from 1938. When the Japanese left there was a brief period of recovery, and then the Communist revolution. Whoever these three were, no-one knows but they're preserved forever by the camera.
at October 03, 2013