Miah Persson and Florian Boesch sang Schumann with Malcolm Martineau at the Wigmore Hall for the latest of his Songlives series. In this recital we traced the different stages of Schumann's development as song composer. There were thirty seven songs, some of them fairly long, plus two encores, but the performances were so good that the evening seemed to end all too soon.

Sensucht (WoO 121 1827), written when the composer was 17, is a deceptively simple song, for which Schumann wrote his own text. Heinrich Heine stimulated him to a more sophisticated work, the same year, Gesanges erwachen (1827). Persson's voice was lithe, suggesting youth..

Most of the Wigmore Hall audience know Schumann's songs of 1840, so Martineau and his singers presented a brief selection of Eichendorff,
Kerner and other songs. The Liederkreis op 39 are familiar, but Boesch and Persson made them feel fresh and newly minted. Persson's Frühlingsnacht, her timbre so lustrous that you could almost see moonbeams. Yet even in the midst of beauty, Lieder reflect on deeper mysteries. In Schõne Fremde, the rustling myrtle leaves seem to whsiper secrets. "Was sprichtest du wirr" Boesch sang in hushed tones, "wie in Träumen zu mir, phantjatstiche Nacht?" Boesch's flawless modulation expressed excitement, wonder and even a twinge of fear. In Waldesgespräch, a vision of beauty turns on the beholder. Boesch sang the maiden's song so it felt almost hypnotically plaintive. Thus he didn't have to exaggerate the word "nimmermehr" at the end. Its forceful impact had been building up quietly all along.

There are eight songs in the full Frauenliebe und -leben op 42. but the three chosen here were a succinct summary. Persson's voice fluttered as she sang of the woman's first glimpse of the man she would marry. No coy giddiness here. Persson's singing is so assured that she can suggest that this woman is no mere object of a man's fantasy, as some critics of the cycle believe. Persson makes the woman feel mature and confident, making her own choices.  Helft mir, ihr Schwestern came across as a warm-hearted hymn to sisterhood. Hearing the song of widowhood straight after this was very touching.. Just as we've come to know the woman and her happiness, that happiness is snatched away. It's relevant, too, in the context of Robert and Clara's life together.

Boesch sang three songs from Kerner Lieder op 35 and Persson sang two of of the Zwolf Gedichte aus 'Liebesfrühling' op 37 to texts by Friedrich Rückert. Together they sang the duet Herbstlied op 43 no 2,. It's a jolly song: winter poses no threat to those who believe that Spring will come again. Suddenly, the mood changed. Boesch sang Belshazar op 57. What an inspired juxtaposition of two very different songs! 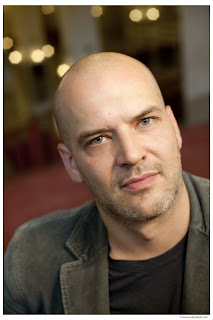 Bryn Terfel sang Belsazar at the beginning of the Wigmore Hall 2013/14 season (more here).  Boesch sang with equal dramatic intensity but brought out the psychological nuances far more effectively. "Der Mitternacht", sang Boesch, immediately establishing a sense of dangerous portent. Schumann writes hustle and bustler into the music, to suggest the rowdy party. Boesch's phrasing shows how the King is getting drunk, reeling from side to side, rashly showing off before his vassals. "Ich bin der Kõnig von Babylon!", sang Boesch, just slightly off kilter so you could imagine the King puffed up but wobbly. Martineau played the rumblings in the piano part: even before the hand of Jehovah appears, the Babylonians are on shaky ground. The text is Heine, so the song ends curtly, without melodrama. The last line is chillingly matter-of-fact. ""Belsazar ward aber in selbiger Nachrt" sang Boesch without sentimentality. "Von seinen Knechten umgebracht".

To illustrate Schumann's later years in Dresden (1845-50) and in Düsseldorf (1850-54), Martineau picked songs that  highlighted different aspects of Schumann's life. To show Schumann as Pater familias, songs from the Liederalbum für die Jugend Op 79: Boesch sang Schneeglõckchen and Persson sang the Mõrike song Er Ist's. These songs are charming and whimsical, in contrast to  the Harper songs from Wilhelm Meisters Lehrejahre Op 98a, written within the same year.

Goethe's Wilhelm Meister songs have been heard at the Wigmore Hall in various incarnations several times this year, (Wolf and Schubert) so it was immensely satisfying to hear Schumann's versions. Boesch started with Wer nie sein Brit mit Tränen Aß, perhaps the bleakest , then sang Wer sich der Einsamkeit vergibt and An den Türen will ich schliechen. His firm, measured pace suggested that the Harper faces his destiny with dogged resolution, far more courageously than if he were to court self pity. Of the current crop of singers in this fach, only Goerne and Boesch create the insight these songs deserve.

The recital concluded with songs written towards the end of Schumann's productive life, Abschied von der Welt and Gebet from Gedichte der Königin Maria Stuart Op 135, 1852). In the circumstances, lines like "Was nützt die mir noch zugemess'ne Zeit ?" (What use is the time still allotted me?) feel painfully poignant. We think of Schumann in the asylum, alone, the past behind him.