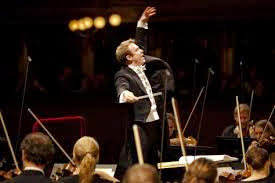 Mahler's sketches for the Tenth may have been written towards the end of his life, but they represent a new beginning, not an end. As Professor Henri-Louis de la Grange showed in the fourth volume of his monumental biography, Mahler had undergone traumatic changes personally and professionally. Harding's clear, intelligent approach suggests  Mahler on the verge of a visionary creative breakthrough.

The Adagio begins with exquisite refinement : gossamer textures float, enhanced by the entry of a deeper, more resonant theme. The horns break away, as if they're leading us further into the mountains, into the realms of Mahler's creative imagination. This performance is tinged with more sadness than the Vienna recording. Finer pianissimo, so when the expansive theme returns, it surges like a heartfelt cry of regret. But, as in the Third Symphony, a panoramic vista opens. There are further, and higher peaks to climb.  Flutes and woodwinds whip forwards, like the winds on mountains. The dialogues in this movement are well defined. Perhaps they are a reference to Mahler and Alma, his "ewiger weiblicher" Muse.  But what do those chilling “scream” chords”suggest?  Harding observes the moments of near silence, hovering on the brink, so to speak, before those cataclysmic chords explode. The line seems to last forever, an almost electronic blast of near dissonance. Gone now are the allusions to summer and open horizons..Now very high flutes and harp suggest the "alpine" mood transformed into other-worldly stillness.

The Berliners are especially good at creating the swaggering Weltlauf  in the wild first Scherzo, brutally mocking the refinement of the Adagio. Harding deftly juggled the rapid changes of meter, tempo. Harding brings out the manic energy so it contrasts with the softer, more melodic theme. This time the dichotomy between themes feels dangerous, the throwing down of a creative gauntlet?  Small trumpets herald forward progress: the movement ends with glorious, exuberant vigour, tautly defined and energetic.

The Purgatorio is a small movement bridging the first and second scherzos but it's significant in that the duality that runs through the beginning of the symphony changes into a series of individual voices, much as will happen later.

On the title page of the second Scherzo, Mahler writes “The Devil is dancing it with me! Madness, seize me … destroy me! Let me forget that I exist, so that I cease to be.” But a careful observer will note that Mahler then adds “dass ich ver ….” (so that I ….) and trails off without completing the idea. It’s a preposition, but this whole work is a kind of preposition, open ended because it isn't complete.   A delicate yet quirky waltz circulates through this movement, in counterpoise to the demonic tensions. Listen to Daishin Hashimoto, the Leader, play a bittersweet melody: a lone voice distinct from the forces around him.  Then other voices join him : Jonathan Kelly the Principal Oboe, Andreas Blau, the Principal Flute and Daniele Damiano, Principal Bassoon.

Absolute silence, acutely observed to emphasize the transition to the Finale. This is supposed to depict the funeral march of a fireman, which Mahler and Alma watched from their hotel room in New York. The tempi are slow, even for a funeral. It's more symbolic than literal. Very muffled percussion, as if heard in a dream. Bassoons moan, trumpets and horn cry out. Harding's tempi suggest that sound and time hover suspended in some strange limbo. Uncommonly moving.

Then the orchestra springs to life again, revitalized and reanimated. The "soaring" expansive theme of the Adagio returns, this time firmer and more confident. When it builds to a climax, we can hear an echo of the "scream" chord, again held for what seems like eternity. This time the "scream" is not so much raw anguish as paralyzing numbness. Then the oboe reintroduces the "warm" theme. Perhaps it's meant to suggest balm or transcendence. We don't know, but for me that is part of the fascination.  It's much more difficult to play legato finely balanced and as sustained like this, but Harding and the Berliners can do it so well that the music seems to stretch into infinity, dissolving into something so pure and stratospheric that our ears can't hear it. Absolutely true to context.

This is astounding. It might not appeal to those who prefer "easy listening" Mahler or flashy showman conductors, but for me, it's incredibly profound. Harding shows that the sketchy nature of this piece can be an asset, reminding us that we'll never know what Mahler might have done if he'd revised it. The spare, gossamer orchestration reminds us that there are mysteries in life we're never meant to solve.
at October 04, 2013