Pretty but dead - The Rape of Lucretia Glyndebourne Touring 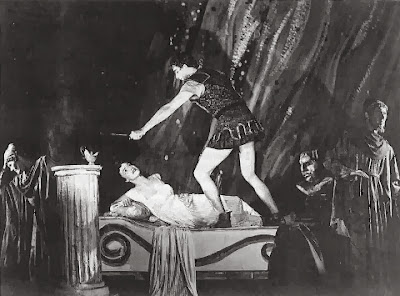 Benjamin Britten's The Rape of Lucretia is uncompromisingly difficult. Once penetrated, it reveals its true beauty. Like Lucretia herself. Fiona Shaw's The Rape of Lucretia for Glyndebourne Touring Opera is a postcard. No doubt this production will be widely popular but Britten it is not. It will , however, appeal to those who prefer their opera pretty and undemanding. But let's not forget, Lucretia is lusted after because she is beautiful.  Like this production, she ends up dead.

It is a measure of John Christie's visionary foresight that The Rape of Lucretia  premiered at Glyndebourne in 1946, so hearing it at the modern house at Glyndebourne made me think of the background and initial reception. Britten was a radical choice. The Rape of Lucretia was state-of-the art new music at the time,  a radical departure from conventional opera mores. Christie had courage. Nearly seventy years later, The Rape of Lucretia is appreciated because it is contradictory in the typical Britten mode, throwing out clues that defy easy answers, deliberately discomforting simple interpretation. The real protagonists, in many ways, are the Male and Female Choruses. They contemplate the moral, philosophical and political aspects of this opera. Ignore that fundamental distancing and lose its meaning. The much misunderstood "Christian" framing device doesn't work if it's taken literally. It's Britten's oblique way of occluding meaning. Even the text is calculated to throw us off balance, rhymes falling off-centre (fail = all, not fail =fall) for example. Singers have to be alert.

The Rape of Lucretia is not a narrative. It's not ordinary theatre, unless one wants to emasculate Britten and what he stood for.The set designed by  Michael Levine suggestsd an archealogical site, That's good, because the Male and Female choruses are looking back on a distant past where values were fundamentally different to their own. It also reflects the idea of Tarquinius wandering through the maze-like interior of Collatinus's mansion. It's perfectly plausible that Tarquinius's real erotic fascination is with Collatinus, like himself an Alpha male. The opera begins with male bonding and rivalry, a metaphor for politcal dominance. Tarquinius has screwed the Romans, so it follows that he should do the same to Collatinus''s inner sanctum. The set is covered with "mud" rather like Barry Kosky's ENO Castor and Pollux (see more here) but there it served a meaningful purpose. Fiona Shaw's Rape of Lucretia looks nice but sits on the surface. No digging, no depth.  Like Deborah Warner's Eugene Onegin (more here), there's no point in applauding scenery. But perhaps the "public", whoever they are, prefer their opera shallow.

What saves this production is the cast. Allan Clayton sang the Male Chorus with great intelligence. His diction is precise and clear, so those who were paying attention could revel in his committed, dignified delivery. Kate Valentine sang the Female Chorus. She's not remotely as forceful as Sarah Connolly was in the 2001 ENO Rape of Lucretia,  but such intensity would have been wasted on this determindedly straightforward production. In 2001, Christopher Maltman almost stole the show with his gym-toned physique. Duncan Rock, the sexiest man in the business, is an equally stunning Tarquinius, instinctively pacing the stage like a panther. Rock can do animal energy in real life: in the theatre, he's a natural asset. David Soar was an exceptionally strong Collatinus, so good that he elevates the role was above the limited part it plays in the libretto. Soar and Rock are outstanding: one could build a very astute interpretation around them.

Lucretia herself is a complex figure and her rape is not, by any means, merely a physical act. Even her husband is quick to forgive, despite the political and status implications. It's perfectly reasonable to read The Rape of Lucretia as a depiction of male/female relationships and ignore the wider meanings. It's true that the text refers to her lips (use your imagination) but I'm not comfortable with the idea of Lucretia as an object to be gazed upon. Like Collatinus's favourite flower, the orchid, Lucretia is tougher than she looks. Indeed, it's arguable that she's even a woman, given Britten's predilection for curiously male females. Angelika Kirchschlager's Lucretia (Aldeburgh 2011, Oliver Knussen) was astonishingly powerful because she wasn't passive. Claudia Huckle's Lucretia was nicely sung but devoid of directoral insight. Do we end up gazing lubriciously like Tarquinius, or do we think for ourselves, like the Male and Female Choruses?  This production should be a box office hit, sadly because Britain isn't yet ready for Britten.
at October 20, 2013

Email ThisBlogThis!Share to TwitterShare to FacebookShare to Pinterest
Labels: Britten The Rape of Lucretia, glyndebourne