Kaspar Holten promised that Verdi Les vêpres siciliennes at the Royal Opera House would be a spectacle, and he was right. The sheer presence of singers like Bryan Hymel, Michael Volle, Erwin Schrott and Lianna Haroutounian guaranteed its success, and Antonio Pappano's impassioned conducting made it orchestrally thrilling. Indeed, I suspect the singing will get even better as the run continues. Musical excellence is a given with this cast, conductor and orchestra. The big news was Stefan Herheim's ROH debut.

Like the recent Salzburg Don Carlos (reviewed here) as opposed to Don Carlo, Les vêpres siciliennes, as opposed to I Vespri Siciliani, is bringing greater respect for Verdi's French language operas. Les vêpres siciliennes isn't a rarity. It's been staged several times in Europe in recent years (including Christof Loy in Amsterdam) and was heard in London in 1968 at the Camden Festival. These operas change casual assumptions about opera history. Verdi is enhanced, as an international figure and as a composer for orchestra.  Les vêpres siciliennesis a long, unwieldy creature as was the style of the era. Meyerbeer's Robert le Diable confused London critics whose knowledge of period probably isn't vast. The challenge, for the Royal Opera House, is to present antique repertoire in a way that modern audiences can relate to. I was privileged, last night, to sit beside a lady who had never been to an opera before. Les vêpres siciliennes is a daring choice for a first opera, but this lady was thrilled! Which goes to prove that audiences should listen with open minds and open hearts. 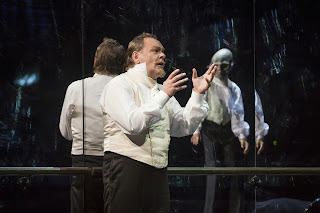 Stefan Herheim's Les vêpres siciliennes may not be as astoundingly brilliant as his Salzburg Die Meistersinger von Nürnberg (see review here), but Verdi isn't Wagner and this isn't, perhaps, Verdi at his best. But Herheim develops the innate ideas in the drama. The set, designed by Philipp Fürhofer, reminds us that we are watching an opera, most certainly not a historical document. It was frightening how some London critics were unable to cope with La donna del Lago  (more here) as Rossini's vision of Scotland as opposed to the reality of Scotland's past.  Until audiences in our time drop the silly notion of setting specificity - which didn't exist until very recently - we need sets like this to remind us that opera is art, not history. Theatre-within-theatre sets might be a cliché is inept hands, like Robert Lepage's taxidermy Adès Tempest (reviewed here) but Herheim has always been interested in the process of creative development, and we need to focus on Verdi or miss the point of this version of the opera in French. 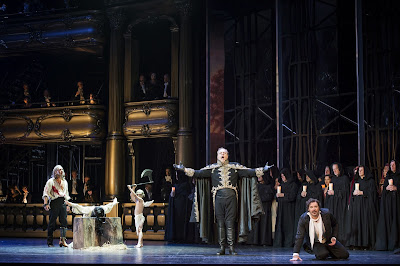 The Overture unfolds to a scena where soldiers attack ballerinas. It's absolutely in keeping with the brutality of military occupation, and validated later in the libretto. It also connects to the use of ballet in French opera, and perhaps to the way artists are screwed by those who want mindless entertainment, not art. The auditorium lights up and we see the punters in the boxes in the stage theatre laughing. At the very end, when peace seems possible, good people are massacred. So much for "patriotism" and easy answers. It's not easy to stage a massacre in the limited time the music provides, so throwing light back onto the ROH auditorium throws responsibility onto the audience. Like Verdi, we too have to be creative and enact the horror in our minds. The story doesn't end when the music stops. 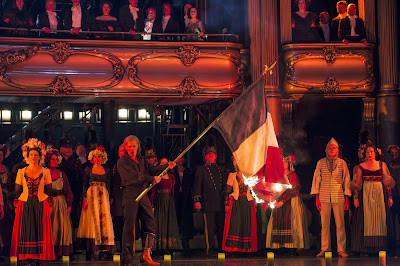 Herheim shows how dance is integral to the opera. Dancers don't just appear for the beautiful Four Seasons ballet (as was planned) but are incorporated as silent figures at many points in the drama, again  reinforcing the idea of art as opposed to reality. In the final act the ballet has more dramatic purpose than many expect. The celebrations are delightful but the charm is artificial, just as the plot at this stage is hopelessly fanciful. The music and the dancers are pretty but the opera will end with blood. hence the constant tension in the undercurrents in the music. Appearances are illusion. Henri (brilliantly sung by Bryan Hymel) turns out to be the long lost son of Guy de Montfort (equally brilliantly sung by Michael Volle).On these sudden changes, the opera pivots, much like the movement of a ballerina.  The vast choruses sway: who are the patriots, who are the persecutors? Procida (Erwin Shrott) is initially a sympathetic character, whose "O Palermo!" rouses us to his cause. But he's more interested in killing than compromise. At the wedding ball he appears in disguise, dressed as a ballerina in black tutu, with red sequins that suggest blood. It's in keeping with the text and also reinforces the theme of dance as metaphor. Even the distorting mirror walls in the set reflect the distorted images in the drama.

Herheim productions are so detailed, and so thoughtful, that images repay careful consideration. The skull masks the chorus wear, for example, hide their faces but also remind us that, even in the midst of a party, Death awaits. When the invaders attack women, a small boy stands up to them, waving a toy sword. Later he becomes a Cupid. Artists often have signatures. This child figure is typical Herheim, suggesting purity amid conflict, and the ultimate validity of idealism.  Bear this image in mind, carefully, because this production generated nasty speculation from those desperate to disparage Herheim and Holten. Even the change of choreographer was construed as anti-Herheim, even though the background to the dispute was much more complex and not related solely to the production. This Les vêpres siciliennes fully vindicates itself. Go, listen,. learn and enjoy.