ENO Fidelio - much truer to Beethoven than you'd expect 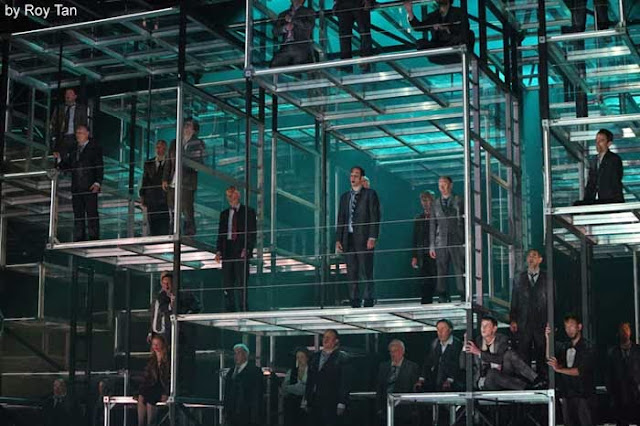 ENO's Fidelio is much more faithful to Beethoven than its detractors might think. Beethoven wrote only one opera, but wrote numerous other works that deal with abstract ideas like tyranny and freedom. That 's an obvious clue to understanding Fidelio. It's not musical theatre in the usual sense, but an abstract piece where characters act out conceptual ideas. It connects to the Eroica, Symphony no 9 and much else. Far from distorting Beethoven's ideas, Calixto Bieito's Fidelio is musically informed and integrates Fidelio into the wider context of Beethoven's genius.

Beethoven thinks as a musician, not as a dramatist.The Singspiel (for Fidelio isn't really an opera) starts with the third and most satisfying of Beethoven's Leonora Overtures. There are many precedents for this, so Bieito isn't doing anything unorthodox. Even the idea of readings from other sources isn't new. In this case, the chosen texts were utterly relevant. This alternative order is good because it establishes background. Leonore is the real hero, even more so than Florestan. Jaquino and Marzellina are secondary characters, more caught up in self-interest than Leonore and Florestan who are prepared to die for what they believe in. Bieito's choice makes Beethoven's glorious, passsionate music central to the whole interpretation and places Leonore at the heart of the drama.

Strange creatures crawl in the darkness. Lighting effects suggest the dripping water in the dungeon. That's no minor detail. The prison walls may seem impregnable, but water is seeping in, gradually undermining the foundations. The "rats" are revealed as prisoners, dehumanized by their situation. When the set for the prison is lit, it hits you in the eye. As it should. Prisons are supposed to be oppressive. The design, by Rebecca Ringst, isn't merely a metaphor for the mind. It looks like a real prison, utilitarian and impersonal, where walkways, bars and maze-like structures serve to keep prisoners constantly under surveillance. (the stills don't really capture reality).  Like trapped animals, the prisoners struggle but are helpless. Leonore puts on male clothes and chooses to go in. Beethoven was right. This Overture, and this staging which gives it prominence, places Leonore and her courage right at the heart of the drama.

Leonore is an amazing character, a heroine who could have come out of Greek saga, a Brünnhilde before her time. Although we know from the libretto that Florestan is well connected but dangerous, we don't know much about Leonora except that she's a loyal wife. Thus, perhaps, the piece is called Fidelio rather than "Leonora". She's more concept than woman. Emma Bell, however rises to the challenge, the assertiveness in  her voice suggesting Leonore's firm resolve. The staging, however, lets Bell develop the role further. Leonore enters the prison disguised as a man. Mission accomplished, she can become a woman again. Full marks for the Personenregie here. In stilettos and an elegant sapphire dress we can glimpse what Leonore's social position might have been, and appreciate her sacrifice all the more. Bell's voice softens and becomes warm and feminine as she and Florestan (Stuart Skelton) embrace : human beings once again, not prisoners, not abstract concepts.

Perhaps this is the true "ending" of Fidelio, as Bieito suggests. As Skelton sings in this English translation, it doesn't matter if he's a prisoner as long as his ideals are unsullied. Love, and the love of life transcend oppression. Indeed, because Beethoven hated women, except as theoretical models, ideals perhaps mattered more to him than marital love. The maze-like Prison rotates, its "walls" disintegrating in a blaze of light. As theatre, this is extraordinarily powerful.  Obviously, Florestan couldn't trek upwards and escape through a vast prison, especially in chains. He's liberated because he's vindicated. a masterstroke of sheer brilliance, Bieito inserts the third movement from Beethoven's late String Quartet op 132., the Heiliger Dankgesang eines Genesenen an die Gottheit (Holy song of  thanks from a convalescent to the Divinity). After years in the prison of deafness, Beethoven endured a near death experience, from which he recovered, almost miraculously. Like Florestan. The score is marked  "Neue Kraft fühlend" (with renewed strength), which indicates not only performance but meaning. As an illustration of the meaning of Fidelio, it's a flash of inspired perception.

Whatever happens to Florestan, this is the illuminating event of his whole life.  The Heath Quartet descend from the roof space, like emissaries from God. They're in "cages" for safety reasons, but the image also reinforces the idea that art can transcend physical restraint. A friend of mine says that String Quartets are an idealized form of human endeavour because the players have to listen to each other or they can't play. That, too, is a message appropriate to Fidelio, and to art in general. The remains of the "prison" structure are lit in tones of gold and green. Barbarity is transformed into beauty. It's a wonderful conjunction of music, visuals and meaning, indescribably moving. Perhaps this is the "true"ending of Fidelio. ratherv than the clumsy farce that follows.

As if by a miracle, Don Fernando materializes and injustice is neatly put to rights. Bieito develops this Deus ex machina contrivance, so it intensifies the meaning of the work as a whole. Dressed as a baroque grandee, complete with powdered wig and face paint, Roland Wood appears in a box above the stage. Of course (in the original) Fernando sings "Tyrannenstrenge sei mir fern." but the very fact that he's sent by the King to save one of many is a form of capricious tyranny. Bieieto also notices the subtle hint in the text "Euch, edle Frau, allein, Euch ziemt es, ganz ihn zu befrein". ("You alone, noble woman, have the right to make him free"). Like Florestan and Leonore, the chorus change back into semi-normal clothes, as if they've recovered their dignity. But their clothes are scuffed. They wear placards, but not all of them marked "free". Justice doesn't happen in the real world. It's pure luck. Beethoven was far too astute politically to swallow the play's ending but what alternative could he visualize in his lifetime? Fidelio is subversive and horribly relevant even today. Perhaps that's why audiences may prefer to hide. Taking conceptual thinking out of Beethoven betrays nearly everything the composer stood for. Bieito restores him to his true glory. Fidelio is shocking, and should shake us out of complacency.

At the ENO in London, we might not get singers of the calibre of Jonas Kaufmann and Anja Kampe, as Bieito had in Munich, but Emma Bell and Stuart Skelton are very good. I was very impressed by Roland Wood's Don Fernando, for he expressed a lot more in the part than a routine reading might suggest. In the ENO Pilgrim's Progress (review here), he wasn't as compelling as Roderick Williams might have been in the part, but he's a singer worth paying attention to. Sarah Tynan was an excellent, clear Marzellina,  It's not her fault that the part is little more than a sideshow (or smokescreen) for Leonore herself. James Cresswell sang Rocco, Philip Horst sang Don Pizarro and Adrian Dwyer sang Jaquino.  Edward Gardner conducted. The blocking and stage direction (Assistant Director Anna Brunnlechner) was very good indeed.  In general, the London production was toned down from Munich, but still very effective.

The trouble is that London audiences (and critics) think in  terms of Bieito's notoriety and come primed to scream at what they think he's doing wrong rather than to listen to what he actually does.  What an irony! Florestan is imprisoned because people don't want his ideas to be heard.. Beethoven sets the word "Freiheit!" so it's a challenge. Freedom of opinion is freedom from tyranny, whether or not you like the ideas being expressed. That's a point that's lost on some who hate modern stagings on principle. But throughout history, narratives have been reinvented with new perspectives and performances. Where would we be without Greek myth? Those who hate on principle often say that directors should "respect" an opera. But as with most clichés, that can be turned completely on its head. Opera is strong enough to support many interpretations and perspectives. Sadly, more people would be Pizarros than Leonores.
at October 07, 2013

Audiences don't object to innovation, they just want it to be intelligent and done well. You're right to say that Beito has ideas but he does not have the stagecraft skills to carry them off and the result is pretentious, amateurish, full of cliche and even fuller of me, me, me. Thus the amazing transformation of the set becomes the most ponderous, boring coup-de-theatre imaginable, halting the action and rendering itself irrelevant. The added dialogue was largely inaudible, embarassed muttering and what little I head was pretty juvenile stuff. Only the glory of Beethoven's music redeemed this expensive evening.

Fidelio is about freedom of opinion, so you are welcome to yours. But your rationale is emotive rather than informed and says a lot more about you than about the staging. The reading were Llorca, by the way.