Romance of the Fruit Pedlar

The Romance of the Fruit Pedlar (掷果缘) (1922) is the oldest complete Chinese movie we can still watch today. Earlier films, dating from 1909, have been lost, It's a treasure

The fruit pedlar's stall is decoratively arranged. Bunches of bananas hang on hooks, rows of lotus root line the table. The pedlar tries to cut open a watermelon. Then you realize he's new to the job. Real fruit pedlars can wield machetes like surgeons wield scalpels. This pedlar, however, used to be a carpenter, so he measures the melon and tries to cut it with a carpenters saw. Later, he cuts sugar cane with an axe and planes off the outer husk. he's applying the wrong tools for the task.

This is an open air market where the stall holders live in close proximity. Next to the fruit stall is  the "Hall of the Ne'er-do-wells" as the vintage intertitles tell us. It's a tea shop (people who sit about and talk, without doing anything useful). Next to that is a quack doctor with a sideline in fortune telling. A passerby has a swelling. "You need an operation!" says the doctor hoping to make enough money to pay his rent.  The would be patient offers a vase in payment.  "It's a Chien Lung" he says.  But no-one would carry a precious vase in this way, it could be broken.  In other words,  it's not what it seems to be. The image is a huge hint as to what's behind this ostensibly gentle whimsy. What is the "swelling"? What is the illness that needs a cure?

The Pedlar flirts with the doctor's daughter who is as down to earth as her dad is feckless. The girl throws the pedlar the old man's spectacles. While the old man wobbles about blind, the young man has a laugh pretending to be the old guy. He can't see either, the glasses are too thick. The pedlar returns the spectacles and the two men become pals.  The ne'er-do-ells have stolen the girls things.  "Why don't you look after it properly?" they shout.  Anotrher clear (to those who know history) what the movie is really about.

Because the fruit stall is untended, small kids take all the fruit. But the pedlar's good natured and plays with the kids.When the ne'er do wells tease the daughter, the pedlar comes to the rescue and pushes the tea shop owner into his vat of herbal tea. The pedlar and the daughter are in love, but the doctor says he'll marry her off to whoever makes him rich. 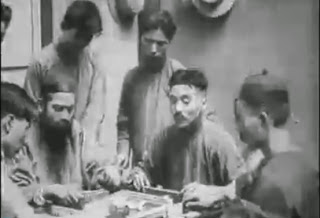 Upstairs, above the street in every sense, there's a prosperous gambling house, where men come and go with loose women. Or rather, women who are forced into the profession because they're poor. One cries as she takes a last look out at the "free" world. In the gambling house, men fight and make a ruckus. Perhaps it's significant that one of the gamblers is a gigantic foreign-looking man with a beard. He's at least 6 foot 6. The tea shop owner pretends not to notice the mayhem above, but falls off the table he sleeps on. Our hero, the fruit pedlar, has a better idea.

Because he's a carpenter by trade, he knows how to fix wooden staircases. So he builds a mechanism that will make the steps slide backwards when he wants them to, so anyone on the steps will slide down.  Like the sudden reversals of fortune on the mah jong table, there will be sudden reversals on the staircase. When the big man with the beard stands on the step, down he slides!  Meanwhile the crafty pedlar hides behind the steps and readjusts them, ready for the next crowd of revellers.  .

The bruised and battered gamblers troop off to the doctor for  help. Notice, however, that none of these men will admit they got hurt falling down stairs at a gambling den. "It's these confounded foreign shoes that caused the mishap", says one. The doctor has so much business that the pedlar has to help out setting bones in order (Chinese type of chiropractice). Now the doctor welcomes the pedlar as his son-in-law because he brought in so much business. But don't be lulled by the charm and delicacy of this story. It's a whole lot more pointed than we might expect.

Because Chinese film makers were progressives and modernizers, there's almost always a moral and social message. In this film, it's pretty clear that the marketplace is a metaphor for China, where poor folk struggle, while dissolute gamblers carouse and exploit. Hence the giant and the foreign shoes, and the tea shop owner who puts up with the chaos around him. The pedlar represents positive action and change. Those who go up the stairs will fall down. Avarice and discord weaken the body politic.  Ordinary men like the pedlar/carpenter can fix things if they use their wits, which are the right tools.  What could be more explicit? Behind the delicate charm of this film lies subversion.