Always something challenging at the Oxford Lieder Festival! James Bowman  appeared at the Holywell Music Room with Andrew West. It was a special experience, far more than an ordinary recital. Bowman was the greatest countertenor of his generation and has been semi-retired for some time, but he's an Oxford man born and bred. The city really should honour one of its finest sons.

More than any modern composer, Benjamin Britten revived the countertenor voice, writing new material that made the most of its unique potential. Bowman was still a student when he met Britten in 1967, so his presence as part of Oxford Lieder's Britten Remembered weekend was an opportunity to hear his personal memories. Bowman was singing with Pears and Britten decided to conduct. Mischief! But Britten was most amused. "When Ben smiled", said Bowman, "The sun came out".

So Bowman sang Britten's arrangement of Purcell's Sweeter than roses and two songs from A Charm of Lullabies (A Cradle Song and The Nurse's Song). Another Oxford Lieder exclusive! Bowman got special permission from the Britten Pears Foundation to transcribe the Earl of Essex's second Lute Song from Gloriana. The Earl of Essex has no taste in music but he wants to suck up to the Queen, who is, as Bowman said gravely, "not amused". So what does Essex sing? even more doggerel. Bowman's countertenor brought out the wicked satire in the song to delicious effect.

Bowman crowned his recital with "I Know a Bank" from A Midsummer's Night's Dream because Oberon was one of his signature Britten roles, along with The Voice of Apollo.  But more rarities. Bowman sang Night from This Way to the Tomb,  a "Masque and Anti-Masque" by Ronald Duncan, who wrote the libretto for The Rape of Lucretia first performed the following year. Note the irreverent title. 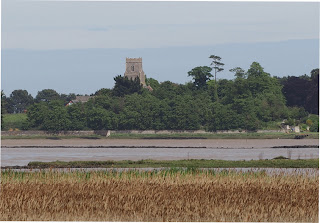 During Britten's final illness, he and Bowman were looking out of the window at Snape onto the reedbeds, with the tower of Iken Church in the distance, "I'd like to be buried there" said Britten quietly. "What, not in Westminster Abbey"? joked Bowman. "I don't want to be buried anywhere near Hubert Parry", Britten snorted.

As Bowman said, Britten couldn't abide most British composers, and had an ambivalent attitude to Vaughan Williams, but admired Peter Warlock. The two men could hardly have been more different. "Warlock was a practising Druid and Britten was a teetotal....whatever" What they had in common was a feel for strangeness. Staunch Catholic Hillaire Belloc might have had Sussex (vaguely) in mind when he wrote My Own Country but Warlock's setting evokes mystery. Bowman's singing touched me greatly. I watched how he carefully moderated the tricky bits and created emotion through his phrasing and expressions.  At the age of nearly 72, his voice isn't what it was but his experience remians intact. That is the mark of a true artist.

"I met Ralph Vaughan Williams when I was a chorister", Bowman told us. "We were taken to see this huge pile of Harris tweed with a mop of white hair on top. It moved, and I shook his hand". Exactly how a small boy would perceive a grand eminence. Bowman sang RVW's The Call and From far, from eve and morning and then returned to Britten. He sang If thou wilt ease thine heart, a setting, of a poem by Thomas Lovell Beddoes.  Britten rarely set early 19th century English poets but Beddoes was an outsider who ended up a suicide. Tenors have recorded it : countertenors like Bowman bring out its surreal side. To ease us into the night, Bowman sang more Britten folksong settings, The Trees they grow so high and Down by the Salley Gardens,

Oxford Lieder, with its focus on the art of performance, showcases young singers and pianists  every year with "Fifteen minutes of fame". This year, tenor Nick Pritchard and pianist Ian Tindale. They sang three Britten Soutar songs and two folksongs including I wonder as I wander, whose corny humour must have appealed to  Britten's boylike sense of humour. Pritchard and Tindale also did Um Mitternacht, one of Britten's few Goethe settings, which showed their fluency in German, but were even more impressive in Salley in our Alley, which gave Pritchard a chance to exercise his comic gifts.

Lots more coming up this week at the Oxford Lieder Festival