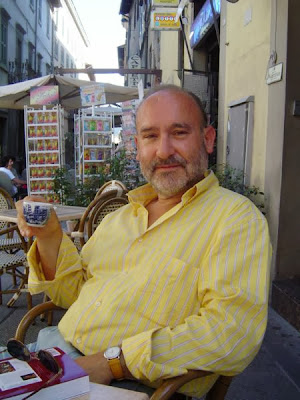 Why was only one performance of Music Theatre Wales' production of Salvatore Sciarrino's Killing Flower (Luci mie traditrici) scheduled for the Linbury Theatre? Tickets sold out so fast that even middle-level Friends of the Royal Opera House didn't get a chance. No hope for ordinary Friends or the public. Chances are that the Sciarrino audience is bigger in London than, say, Buxton or Llandudno, where it's toured and touring to. New music does sell, and Sciarrino's big news.  It will be interesting to read what the fashionable crowd make of Killing Flower.

Coming to Sciarrino's Killing Flower via his chamber music prepares you for its strange, exquisite beauty.  Please read some of my earlier posts on Sciarrino's music, especially like this. which describes his ideas and techniques.

A disembodied female voice is heard, singing unaccompanied, from a distance. The melody is seductive, but strange, like renaissance music heard distorted throuuh the filter of of time. What has become of those inn the drama that's about to unfold?  Already we're thinking ahead, beyond the initial drama. Legato gives way to fragments of disjointed sound. Sentences are short, snatched moments of connection that break off leaving images half-formed, like conversation in real life, where meaning is conveyed through unconscious signals. Darkness, blood, lilies, roses, breath, death. Like most of Sciarrino's music, you listen with your senses alert, picking up details. What is that growling, snorting sound behind the singers? It's at once metallic and animal, suggesting something horrible to come. .

In the Italian version of this opera, the word "poco" emerges clearly at the critical points, hinting at changes of direction. Suddenly we hear Renaissance music, of a sort. How sweet and grave this sounds! the formal dance gives way to a new scene. It's noon and the couple are in a garden - we hear twitterings and rustlings  and strange scraping sounds. Two high-pitched voices, which break into soaring arcs. La Malaspina and the Guest are up to something: we hear the servant commenting, in dark muted tones. A longish orchestral passage, circling sounds, growling, breathing."E questo?" sings Il Malaspina, "What's up?", the words repeat and twisting on themselves. Violent crashes in the orchestra, rumbling thunder. Poisonous thoughts are seeping into Il Malaspina's mind: listen to the "water" sounds in the Prelude to Act II,  the wailing contortions and plaintive squeals. The wife thinks she's got away with things, but the husband has other plans. Their voices encircle each other, stalking and hyper observant.

Notice the elegant formal structure of this  opera, suggesting mazes and stratagems. In the third intermezzo, the dance music we heard before becomes more jagged, with turbulent sounds - wind? Blood rushing in one's ears?  The "inferno" mentioned in the text?  Slow deliberate drumbeats, like the tense pounding of a heartbeat?  Tense, whirring vibrations. Sciarrino makes us use our ears and imaginations. In the final scene, the couple hover over the bed where they once loved. At first, they're speaking, but gradually she realizes what's happening. Is this murder or a suicide ? Il Malaspina's last words are oddly matter of fact. The music has already spoken.
at October 25, 2013