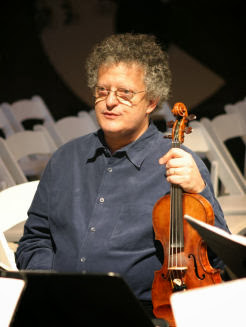 Irvine Arditti celebrated his 60th birthday at the Wigmore Hall. Contemporary music would be nowhere without Arditti and his Quartet (past and present). For nearly 40 years, he's helped shape new music. He can play at such a technically challenging level that works can be created that might otherwise exist only in a composer's dreams.  In turn, he inspires new work written specially for him. Indeed, the Arditti Quartet can be credited with creating modern string quartet repertoire. But he's modest. For his big birthday, he's chosen pieces he's played many times, and enjoys: just right for a celebration among friends. Perhaps that's his secret: he loves what he plays and communicates his enthusiasm to those who listen

Arditti began with Brian Ferneyhough, with whom he has been so closely identified for decades. Not one of the astonishingly inventive Ferneyhough string quartets but one of the composer's early pieces, Intermedio alla ciaconna for solo violin.(1986). Ferneyhough is one of those rare composers who can talk music in his own inimitable way. "Intermedio", says Ferneyhough, "is based exclusively on a series of eight chords, capable of static (symmetrical)  or mobile (asymetrical) modes of extension"   What I heard was Arditti playing impossibly long unbroken lines which seemed to glitter with myriad, frantic detail. "Fictional polyphony" adds Ferneyhough, a way of using a solo instrument to suggest "secondary parametric levels of organization".

No-one really competes with Ferneyhough, so Robert H P Platz's strings (Echo VII, 2008)  seemed sedate in comparison. Hearing members of a quartet playing in different parts of a performance space is nothing new but livened up proceedings. Hilda Paredes's Cuerdas del destino (2007-8) was lively: lots of ideas jostling for attention. Perfect for the occasion.

Altogether more demanding - and more satisfying - was Francisco Guerrero Marin's Zayin I and II for string trio 1983 and 1989) part of a cycle of seven movements. Like Ferneyhough, Guerrero Marin was fascinated by complex organic forms. Zayin I exploded with vibrant energy. Sounds shattered and multiplied. Crack! Crack! sang the instruments, a lot of wood and playing close to the neck of instruments. The score must be black and crackling with densely written notation.  So many sounds in the smallest possible time. Very earthy: I visualized ferns springing out of the soil, in slow motion then speeded up, their fronds unfurling in myriad replicas of their basic structure. Ferns or fractals? Ferns seem fragile but their fronds unfold with powerful energy. there were ferns before man entered the world... Zayin II felt more unified, the instruments buzzing like a hive of bees, contained within the restraint of an enclosed structure, itself a creation of endless repeated smaller cells. When I'm tired, my mind translates sounds into colours. Zayin I and II were almost sensory overload. But how I enjoyed it! When I got home, I ordered the CD.

And then, John Cage, Eight Whiskus for solo violin (1985) Perhaps Whiskus is another adventure linked to numerology and patterns, like Zayin and so much of Ferneyhough, but I loved its quirky wit. Tiny, elusive epigrams which sound oddly like a folk tune plucked on a banjo by a fiendishly virtuosic banjo-player. If the composer had jumped on stage it would have been so typical of his sense of humour.

Akira Nishimura and Irvine Arditti are old friends. Like so many pieces before and to come, Nishimura's String Quartet no 5 Shesha  (2013) was written specifically for Arditti. "Shesha" is a snake, and both composers were born in the Year of the Snake. The piece is a  "celebratory small ring carved of sound in the shape of a snake" said the composer. For me it worked in purely abstract terms, leaping and slithering rapidly: long, slippery legato that tests and taunts Arditti's characteristic technique, playing to his strengths.  Who thinks new music can't be fun ?