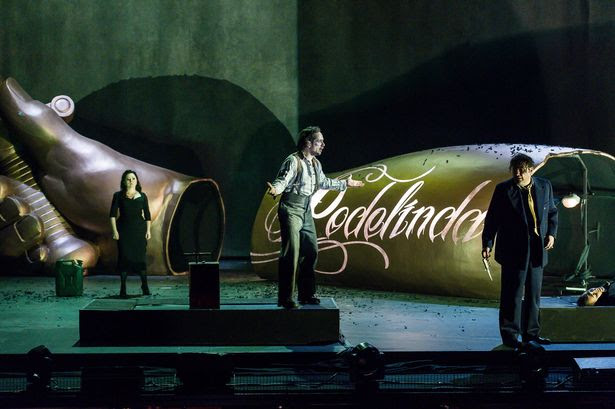 The ENO's Rodelinda will shock some, but the real shock is that it's closer to Handelian values than one might expect.  Glyndebourne's 1998 Rodelinda was ground breaking and has pretty much defined the opera for modern audiences. The ENO doesn't have the budget for singers like Antonacci, Scholl and Streit, and no matter how good he is, Christian Curnyn could never get the ENO orchestra quite up to the level that William Christie got from the specialist OAE. Surprisingly,  the new ENO Rodelinda justifies itself rather well in its own terms.

Richard Jones's Rodelinda, designed by Jeremy Herbert, illuminates the music with a true Baroque palette: burnished gold, amber, emerald, silver and  cream. Action moves between small, confined "rooms" in the set, but this also reflects the music. This is an opera based on solo show pieces,  as each character reflects on his or her own perspective on proceedings, often misunderstanding other people's motivations. Everyone thinks Bertarido is dead, Garibaldo scams Grimoaldo and Eduige, and Bertarido stabs Unulfo, his best friend. Only when the characters realize that simplicity and tolerance are more important than self advancement do they properly reconcile "Dopo la notte oscura più lucido, più chiaro,più amabile, più caro ne spunta il sol quaggiù.Tal dopo ria sventura, figlio d’un bel soffrire, più stabile gioire nasce dalla virtù". At the ENO this is of course translated but it's worth quoting in the original since it refers to the contrasts of dark and light so central to the ENO production. Thus the final scene is specially beautiful. Grimoaldo blows up a giant statue, the symbol of earthly power and vanity. The stage is dominated  by the statue's huge arm bearing the name "Rodelinda" in elaborate baroque script. Love remains when all else is destroyed. The singers are dwarfed, their self interest subsumed by greater harmony. Perhaps one could read a political sub-text into this Hanoverian opera, but it's elegantly cloaked in Classical balance.

Modern tastes are shaped by 19th century operatic styles further  modified by movies and TV, so we've come to expect a much greater degree of realism than Handel and his audiences would have expected. The Glyndebourne Rodelinda, directed by Jean-Marie Villégier, was "modern" in the sense that it emphasized the undercurrents of emotional realism in the opera, giving 20th century audiences an insight into the opera's basic meaning. Richard Jones 's more stylized formalism is closer to the rough-and-ready world of Handel's era, when audiences saw opera as allegory rather than verité. Hence the singers at the ENO journey on travelators, so we can listen to the music unfold when there's no obvious action. Baroque audiences also loved special effects. They didn't have the technology to do video, but the ENO projections (by Jeremy Herbert and Steven Williams) are totally in keeping with the genre.

Rebecca Evans sang Rodelinda, and Susan Bickley's Eduige had was imposing vocally and visually. Iestyn Davies's Bertarido  was very good, his duet with Rebecca Evans in the final act particularly impressive.  What a joy this opera is for those (like me) who love the countertenor voice. Christopher Ainslie as Unulfo doesn't have as big a role but he makes his mark. Richard Burkhard sang Garibaldo, the "bad guy" as baritones should be in Baroque parlance. John Mark Ainsley is arguably the finest British Baroque specialist of our time, and at his peak would have been outstanding. He's still well worth hearing and has stage presence. He's also got guts, showing his bare chest and back, with a Rodelinda tattoo. Humour is very much a part of the humane message in this opera and the production accessed it well.

As in all productions, there are things to like and dislike. I'm not generally a Richard Jones fan, but this Rodelinda has more merits than some would appreciate.