Richard Strauss Die Frau ohne Schatten opens at the Royal Opera House. (read my review here). This opera fascinates because "Shadows" occlude its meaning on many levels. Yet, just as the Kaiserin has to engage with feelings rather than steal a shadow, so should we engage with the opera.  Every interpretation should reveal something. The one thing to beware, I think, in an opera which predicates on oblique contradiction,  is anything too literal.  That's why I love the Salzburg production from 2011, directed by Christof Loy.   It overthrows the whole notion of staging.  Its paramount focus is the opera itself.

It's ironic that those who hate "modern"stagings cannot recognize a production where the music comes first and above all else. Christian Thielemann's conducting is magnificent: crystalline clarity, austere yet passionately, painfully sensual. In this production, the orchestra truly sings along with the voices: there are few distractions to the inherent drama in the music. Indeed, this production underlines an important theme implicit in so much of Richard Strauss's music: the idea of art replicating the making of art.

At first, the production seems like a concert performance. For that the patrons of the Salzburger Festspielhaus have paid a fortune?  that alone says something about the way culture is consumed.  The set references Karl Böhm's historic first recording. The sophistcated Salzburg audience is looking onto a simpler, spartan world that no longer exists. More irony. The cast wear coats because Böhm conducted in an unheated room, but the "coldness" also reflects the situation. In this strange kingdom, the moon controls destiny. The images of falconry, deer and hunting suggest death, not life. This coldness can't continue. The singers are wearing coats because they're embarking on journeys toward change.

Beware the literal. Just as the opera operates on two planes, so does the production. This staging works on a disconcerting metaphysical level, but it's deceptive (rather like the opera). Notice the detail in the direction: the singers interact like singers would, rather than "characters" playing parts, The Nurse (Michaela Schuster) darts spiteful glances at the Kaiserin (Anne Schwanewilms) as if there's form between them. As the opera evolves, we realize that there is some deeply repressed rivalry. Only when the Kaiserin rids herself of this malign mother-figure can she grow. Schwanewilms, who owns the part these days, is superb.  She can concentrate on her singing, capturing the nuanced detail of a concert performance.  Loy's direction is singer-oriented, and the entire cast rises to the challenge. Musically, this production is a revelation - as things should be.

The First Act unfolds in a place and time that defines definition. "Updating" is an utterly irrelevant concept. Just as in many Wagner operas, by the time the opera s begins, tjere's a whole history we piece together through clues in the text. Falcon heads and deer are perfectly reasonable ways to depict this strange world with its images of the moon and hunting. Falcon cries haunt the music, calling out even when they're not mentioned in the text.  Perhaps we even hear gazelles in the fleeting, energetic twists in the strings.  But it's far more disturbing, I feel, to see it staged in this much more metaphysical, abstract way. The singers are seen clutching copies of the score.  Factotums appear on the margins and in corridors, even when they sing. Nothing here is quite what it seems, for very good reason.  Living without a shadow is unnatural. The Kaiserin needs to come down from the lands of the Moon and live among mortals.

Gradually, imperceptibly, the singers enter "acting" mode, their movements becoming more naturalistic as they begin to engage with their innermost feelings.  The set gets busier and more animated: we see action take place in rooms above and to the side of the stage. As the action warms up, so does the lighting, and the possibility of shadow. The sterility of the staging is significant, for the "moon" is sterile, and the Dyer's Wife (Evelyn Herlitizius) has no children. The lushness in the orchestration serves to emphasize the alienation in the Dyer's Wife and the Kaiserin. In the lushness of the orchestra we hear what they are missing out on. Here there are no visual barriers to deaden the sadness. 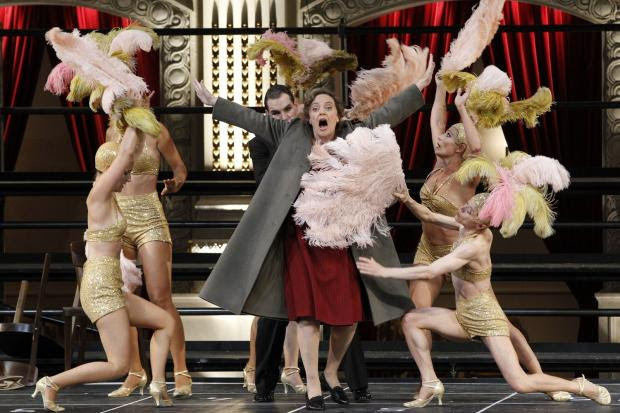 Die Frau ohne Schatten often gets a bad press because the relationship between Barak (Wolfgang Koch) and his wife is misunderstood in a superficial Kinder, Küche, Kirche manner. Everything we know about Strauss's relationship with his wife suggests the opposite. No way was Pauline de Ahna a woman to be pushed around. If anyone did the pushing in that household, it was she. The Strausses imbibed the ideas of the Munich Secession, and its liberated attitude to women. In its own way, Die Frau ohne Scahtten is fairly explicit about sexual repression. The fantasy scene is witty: figures in feathers dance around the Dyer's Wife - flamingos, not falcons!  The shadows are getting sharper now she's coming to terms with her needs.   Much in this opera is alluded to rather than explicit, but the text is reasonably clear what having children really means: the continuation of life. Keikobad is dead, and the Nurse is banished. Barak and his wife will start their own family. We see the minor characters in the staging reappear as child versions of themselves : children everywhere, re-enacting the process of growing up. It's not about "self" but the continuum of life. 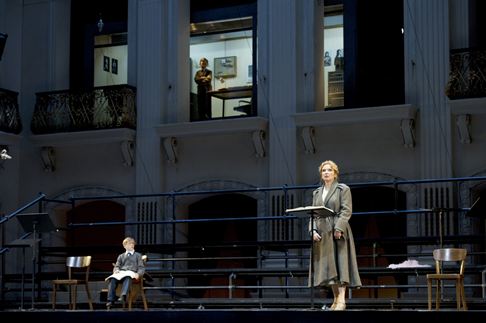 As the Kaiserin faces judgement, there's a wonderful moment when Schwanewilms looks upwards at the empty office. We hear the sounds of the falcon and see the falcon's colours in Schwanewilm's red  hair. When the Kaiser (Stephen Gould) appears in the upstairs office, warmth suffuses her features, though she moves with nervous gestures, like a bird.  The confrontations between The Kaiserin and the Nurse are also particularly intense, like a duel between Ortrud and Elsa von Brabant.  "Higher forces are at work" spits a demonic Michaela Schuster, blazing with violence, draped in black. When all thye principals join in, singing at each other, but together, the turbulence in the orchestra suggests transition : sweeping, soaring discords as if the sky were exploding and the oceans rising. The stage goes black - the music is speaking. Schwanewilms appears in a corner.  As the poignant solo violin plays, she walks, alone, spotlit on the dark emptiness of the stage. It's like seeing pure music come alive. In the orchestra, we hear the invisible "water " motif. sparkle around her. Wonderful connection between meaning, visuals and music. Stephen Gould's voice rings out clarion like as he sings the Kaiser. The Kaiserin has struggled with herself and won. Only now,, we see a Karl Böhm figure smiling down from above.

In the darkness, the stage is transformed. It's Christmas, when a Child is given to the World as Saviour.  The barren frame  set finds fulfilment and becomes a proper performing space. The "Cherubim" wear blue sailor suits, like the Vienna Boys Choir. The Austrian colours of red and white hang from the balconies. The soloists appear in elegant evening dress. Again, the music "speaks". The singers's long, high lines cross and interact, and the orchestra adds richness and grandeur. Even the on stage "audience" joins in, waving rhythmically.  Look ! There's The Nurse forced to spend her life among mortals and fidgety little kids whom she hates ! Schwanewilms turns away, and sees the young couple who had been extras on the set embrace.

Christof Loy's production is exceptionally sensitive to music and meaning, and it has inspired exceptionally good singing and playing. Performers like Thielemann and Schwanewilms aren't going to give this much if they don't believe in what they're doing.  The booing mob think "Regie" means regimentation, but in the real world directors have to motivate performers who know their music well. Co-operation and harmony - the very message of the opera. Strauss knew first hand how the business worked. Maybe there are those who know better than performers of this calibre, but I'm prepared to respect their taste and artistry.
.