"She Fell in Love with a MAD GENIUS" 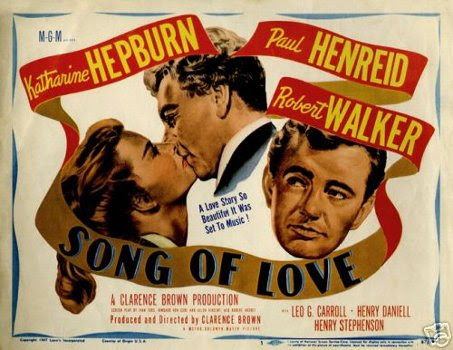 "She Fell in Love with a MAD GENIUS". So ran the publicity for Song of Love, the biopic of Robert and Clara Schumann. You know those two, they had a "love story so beautiful it was set to music". That's a nice way to describe Dichterliebe and so much else.

Katharine Hepburn plays Clara Wieck with a strong American accent, while Robert Schumann (Paul Henreid) speaks exaggerated Germanic English. Within twenty minutes, the courtship,  trial and wedding have taken place and they have seven children. Johannes Brahms, who also speaks American, drops by. Brahms ends up doing household chores and paying undue attention to little Julie. Robert has "headaches". Clara suddenly decides to play concerts again. Her career, she says, is "fleeting" so she'll sacrifice herself so he can write. So when she gives a recital, the maid appears with young Felix in tow, who wants a feed. So Clara plays at a furious pace, to get back to her "real" work. Brahms plays the Weigenlied to soothe Julie, who's about 10 . Robert's going mad because he can't write an opera and "gets headaches". At a recital, Franz Liszt plays an arrangement of Du meine Seele . Clara takes over at the piano and plays it even more beautifully, even though she chats throughout. Schumann conducts Szenen aus Faust in the Leipzig Gewandhaus, but starts to go insane. Hepburn visits Schumann in the asylum, where he plays  Traumerei. Suddenly, it's 1876. Brahms is listening to the premiere of his Symphony No 1. Brahms takes Clara dancing and, over dinner, proposes to her.  Julie is forgotten.  Alas, a gypsy violinist starts to play Du meine Seele, and Clara knows she can't marry Brahms after all.  "He still lives" she cries. And so she dedicates the rest of her life to playing Schumann's music. At her farewell, she plays Traumerei for royalty just as she had done when she was a girl. Though this isn't a very good movie, it's interesting because it shows how Hollywood in 1947 expected audiences to know who Schumann, Brahms, Liszt and even Carl Reinecke were. Professional pianists were engaged, while the actors mimed. The orchestra in the scene in  the  Leipzig Gewandhaus was the Metro Goldwyn Meyer Orchestra. conducted by Michael Steinberg.
at March 18, 2014