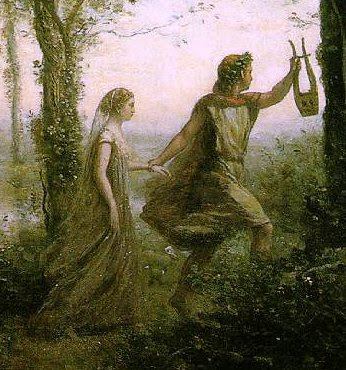 The Royal Opera House and the Roundhouse have announced a new partnership. They're doing a joint production of Monteverdi's L'Orfeo in January 2015. This follows on the ROH Cavalli's L'Ormindo,  a joint venture with Shakespeare's Globe Theatre. It's the first time that ROH has done L'Orfeo, which is hardly surprisng: the opera is very early baroque, better suited to small, eclectic houses and period  performance. The Roundhouse in North London is edgier and gritter, an iconic space in its own way. This is the first time an opera has been staged there and the production has been specially conceived around it. Orpheus goes into the Underworld: glorious music but not a "pretty" story.

Marcus Davey, the Chief Executive and Artistic Director of the Roundhouse, said: “We are really delighted to be fusing the expertise of the Roundhouse and the Royal Opera House to create an important new version of this great opera. Developing L’Orfeo together is an opportunity to think of our building in a new way and introduce our audiences – many of whom are under 25, to opera"  Although  the Roundhouse has a committment to young audiences, and will be planning events around the production, artistic standards should not be compromised. Christian Curnyn will be conducting the specialist ensemble the Early Opera Company, so musical standards will be very high.  The singers are good, too, and include Gyula Orendt,  Susana Hurrell, Susan Bickley and Mary Bevan. Audience new to baroque may rise to the challenge, and baroque regulars to a unique performance space.

Michael Boyd, former Artistic Director of the Royal Shakespeare Company, makes his opera directing debut. He is known for his many productions of Shakespeare plays. Utterly relevant experience. Monteverdi and Shakespeare were contemporaries.

ADDENDUM (because i was in a rush earlier). As I said last year when plans for the Cavalli L'Ormindo were revealed (more here) "For a long time, it's been apparent that the Royal Opera House needs a new medium sized performance space  for productions that are smaller scale than merit the main house but too big for the Linbury Studio Theatre. Perhaps the Sam Wanamaker Playhouse might fit the bill? Certainly it would be an interesting place to do baroque and other works loosely connected to the 17th and 18th centuries, but I don't think it's a long term total alliance.  Outsourcing is not a bad idea. The ENO has been using the Young Vic for years, and the Barbican is expanding across the road and to Milton Court. It makes business sense and doesn't involve spending millions. Only the South Bank seems fixated on  keeping things in one place whatever the cost or the logic"

By using alternative performance spaces the ROH can expand the repertoire it can offer at relatively low costs - no fancy building costs, for example. Opera fans benefit because they get more than can be fitted into existing premises, and more unusual repertoire. More importantly, perhaps, it's what Kasper Holten has been talking about for some time, creating a loose network of different opera companies. Thus ETO and Music Theatre Wales have a London "home". It's not practical for ROH to tour, so the arrangements aren't reciprocal other than in the sense that opera in general will benefit from the exchange of ideas and relationships. Intriguingly, the network might one day include European houses .  Long term this is good for the UK opera world in general.