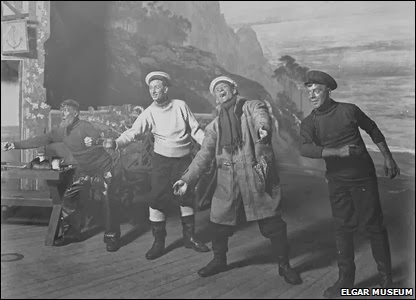 On Monday, 11th June 1917, at what was then a music hall and is now the London Coliseum, Edward Elgar's Fringes of the Fleet received its premiere. Smash hit! Initially part of a Variety performance that repeated twice daily - imagine - the songs proved so popular that the run was extended week after week, and the show toured, returning to London at the end of the year.

Elgar used texts from Rudyard Kipling's best-selling poems. The songs are robustly vivid and good enough as pure music that they work better than many of Elgar's other art songs for piano. A hundred years ago, there wasn't any prejudice against crossover like there is now. Modern music snobs don't know music history.  Fringes of the Fleet was performed with full staging and special effects. The photos above and at right show the singers in their costumes seated "at a seaside pub" as they begin their recital of maritime shanties. The Lowestoft Boat describes a herring boat commandeered for the war effort. The crew aren't sailors! The mate was a vicar in a chapel in Wales, more used to top hat and tails, and the engineer is 58, "so he's prepared to meet his fate" 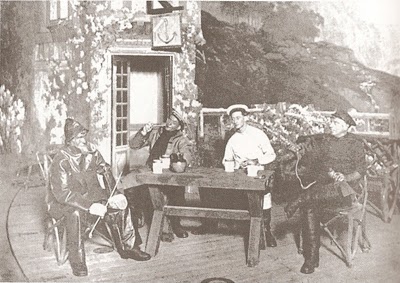 "A game is more than the player of the game and the ship is more than the crew", the refrain in Fate's Discourtesy sums up the mentality of the era, when war seemed like a jolly jaunt. In  Submarines (Kipling's Tin Fish), the four baritones sing long lines near the bottom of their register, like a submarines lurking "in the belly of Death". New technology and surprisingly "new" sounding music, making the most of the unusual four-man ensemble. Best of all, I think,  Sweepers (Kipling's Minesweepers) . Mines have been reported in the fairway, and ships are bottled up in port. The minesweepers are heroes. Hence the chorus, using their names, "Unity, Claribel, Assyrian, Stormcock, and Golden Gain". Rather a mouthful to sing, but carried off with style.

Elgar's Fringes of the Fleet was so popular that a recording was rushed out in early July 1917, three weeks  after the first performance. The singers were Charles Mott, Frederick Henry, Frederick Stewart and Harry Barratt,.On July 23, Charles Mott, the lead, who had sung Wagner at Covent Garden, was called up. He was killed in battle in May 1918. Elgar himself conducted - he was an early advocate of new media. The definitive recording is the recent SOMM disc, with other Elgar rarities  The edition used is by Tom Higgins, who conducts the Guildford Symphony. (more here). The 1917 recording is now available commercially here or here and serves as an interesting example of how vocal styles have changed.  How rigid the phrasing seems now, as if the singers were old men in young bodies. In the earlier Lowestoft Boat, the singers hammed up the sound of dogs barking at the dog's home where the ships cook worked as a civilian. It's cute, but Roderick Williams and his sturdy crew (Nicholas Lester, Duncan Rock, Laurence Meikle) have the musical nous to sing better without losing the sense of adventure.
at March 04, 2014

I have a note signed by Elgar with some measures from "Sweepers." It's from July 1917. And the venue must have been called the Coliseum even then---because Elgar signs his name, then "Coliseum, July 1917"