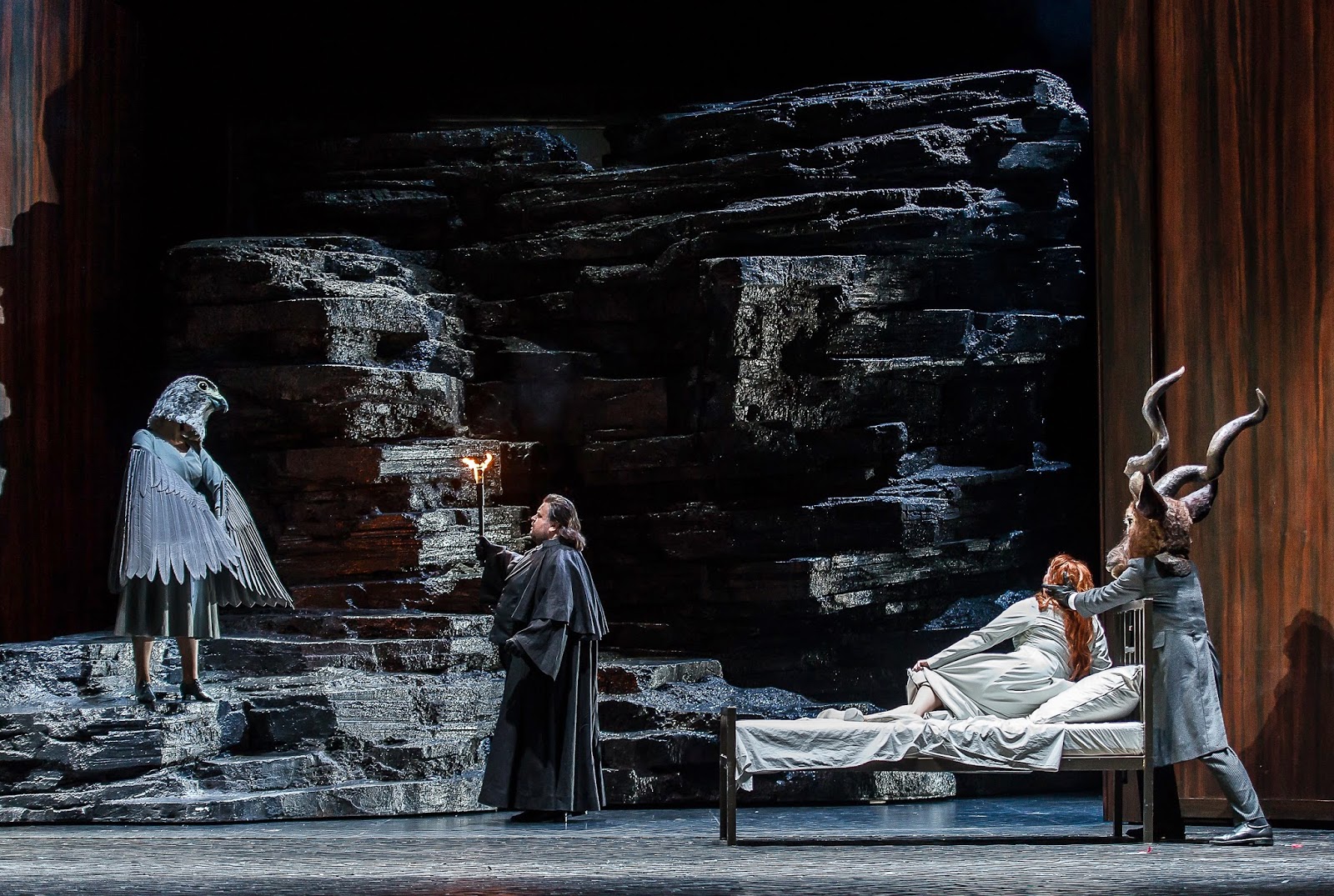 Like all good nightmares, Richard Strauss Die Frau ohne Schatten is bizarre and perceptive, at the same time. And like all good dreams, what you get from them equates to what you put in. In  the Royal Opera House's new Die Frau ohne Schatten, at the Royal Opera House London, previously at the Teatro alla Scala Milan, Claus Guth gives us a simplified cartoon-like version of one of the most surreal fantasies in the whole repertoire.  There are many different levels in Die Frau ohne Schatten, but primarily it involves a search for a shadow. What does this shadow mean? How is a shadow attained? Guth doesn't engage with human or mythical personalities, but on the animals. It's very Walt Disney. "Ignore the ideas", the show seems to say, "Follow the Falcon". 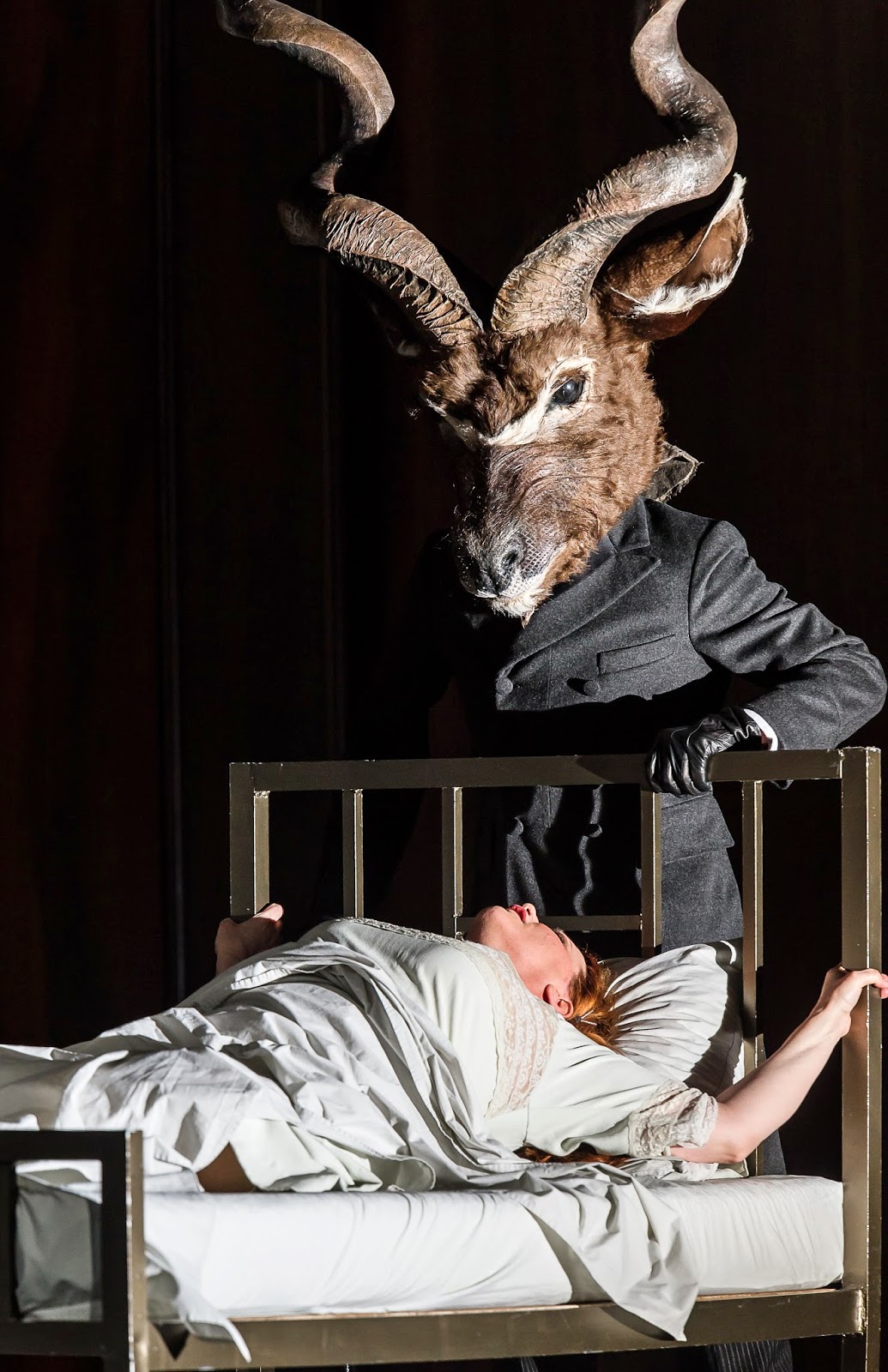 In principle, there's no reason why a single point of entry can't penetrate mysteries. Alice in Wonderland followed a rabbit down a hole. Of course, the Falcon dominates the music. It pops up over and over, at critical points in the drama, invisibly leading the protagonists forward. It's perfectly reasonable for a staging to depict it in physical form, and certainly easier for some audiences than more metaphysical productions. But what does this Falcon mean ? A Falcon is a hunting bird. Diana, the Goddess of the Moon and thus of dreams, is also the Goddess of the Hunt, and of virginal sterility. We don't need to know how Keikobad fathered the Empress with falcon and gazelle DNA, suffice to understand that there is something mysterious and unnatural about her predicament. Until she finds a shadow, by fair means or foul, .she and/or the Emperor are doomed.

In this production, shadows are everywhere right from the start, simple tricks of light. That's fine, but as the drama unfolds, they aren't  replaced by greater substance, symbolic or otherwise. Instead, dancers with falcon and gazelle costumes  dominate the stage. They're lovely to look at, and the Falcon dances like a moth, but  the over-use of these figures turns the opera into quasi-ballet, distracting from the drama in the singing and in the orchestra. But what do these animals really mean? And why are the unborn children shown as beasts of the kill? On a Disney level, they look cute, but in terms of the opera, that throws meaning  out of line. Fortunately, in the last scene, they become "real" children again. 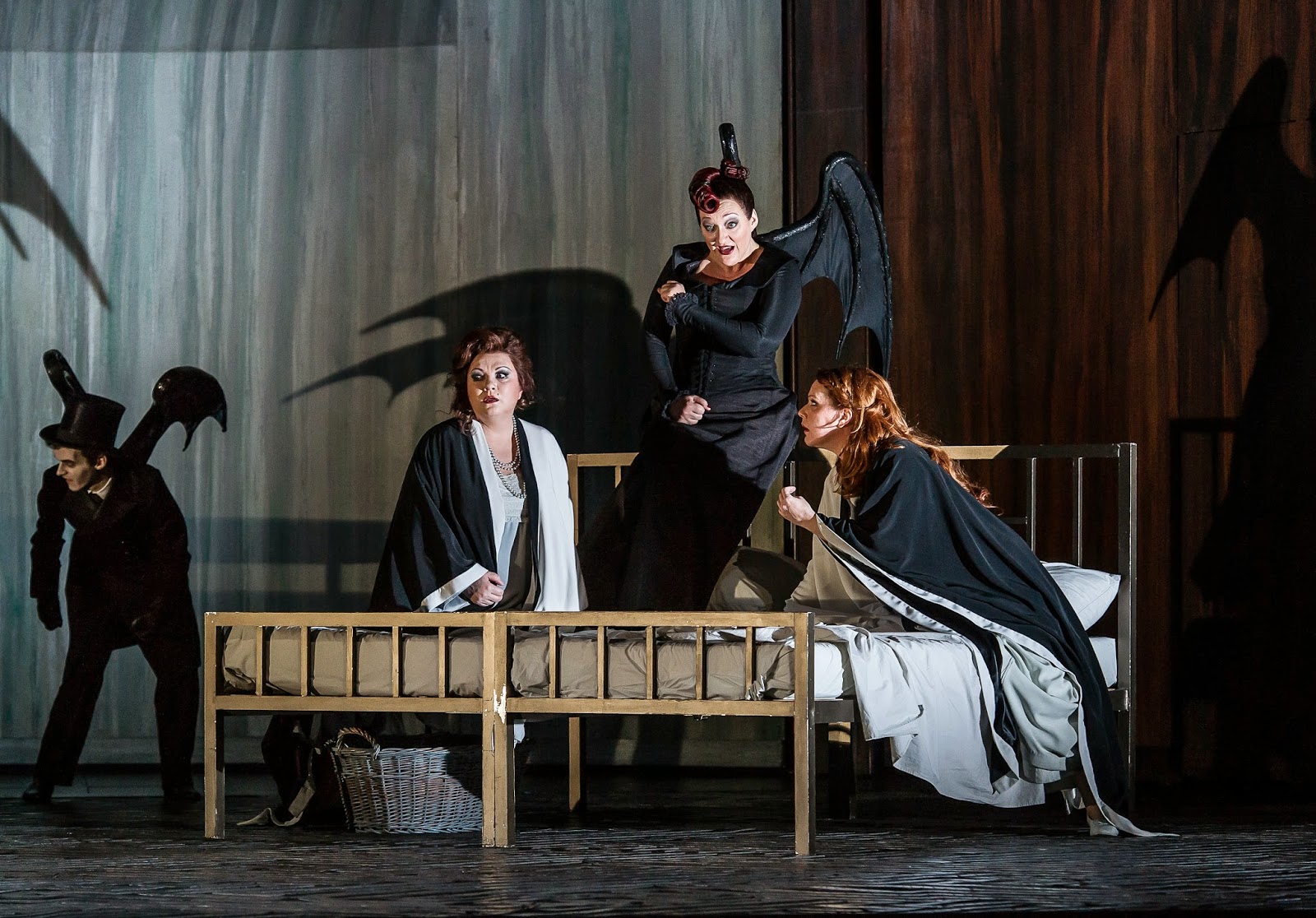 The stage is decorated with pseudo-psychological symbols, like a bed. Purity, sleep, sickness, death and sex - get it ?  In principle, that would be fine, but the clues stop there, and aren['t integrated into the development of the personalities of the protagonists. In von Hofmannsthal's text, The Nurse, for example, is not just a "Nurse" but an anti-nurturing figure who tries to keep her charge infantilized.  The Empress has to banish her if she is to grow. Michaela Schuster can be wonderful in this part as she was in  Salzburg (more here).  She is an asset, technically far more secure  than Emily Magee's Empress, but here she is wasted. Guth relegates her to one-dimensional hospital nurse, whatever the words she is singing might say.

At the end, The Empress is seen in bed again, as if nothing has happened and the whole drama has been no more than a bad dream. Perhaps. But that sums up Claus Guth's approach to the opera, turning it into fairy tale.  So much for the quest for a shadow, "Mother Knows Best". Except this mother figure is malevolent. Indeed, so is Keikobad, depicted as a gazelle with a walking stick. So much for the savage protest of Hugo von Hofmannsthal and the satire Strauss builds into the music. If Die Frau ohne Schatten can be summed up in one phrase (and it probably can't) that phrase might be : challenge authority., find your own way. 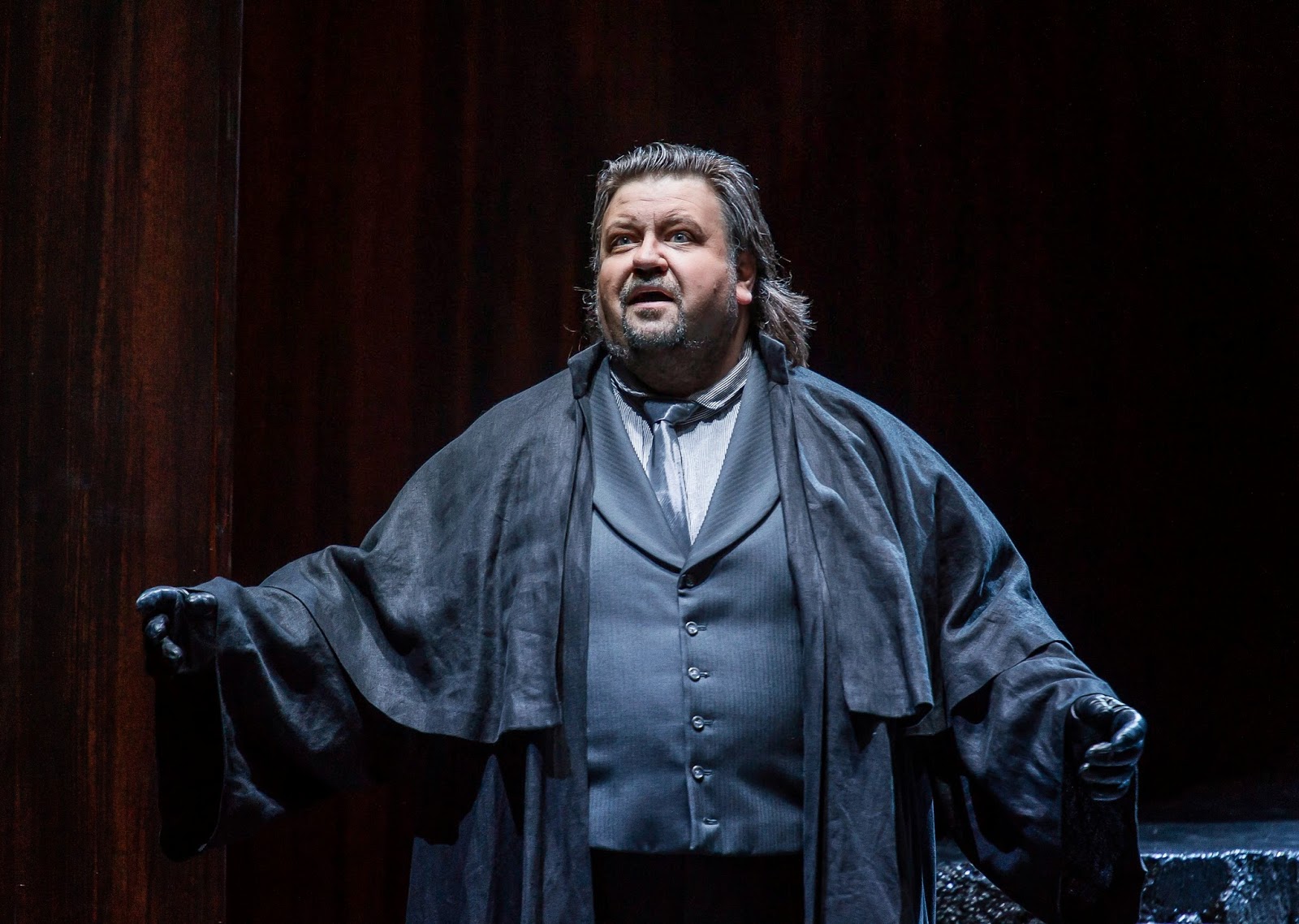 Johan Botha lifts the production onto an altogether more elevated plane. His singing is flawless, his voice rings with gleaming lucidity, each note "crystalline" yet tinged with deeper, more complex nuance. When he appears, it's as if he's descended from the Gods. He simply outclasses everyone and everything around him. For a moment, the trivia of the production fades away. We are hearing perhaps the finest Emperor in the business today. Botha is phenomenal. It's worth catching the show for him alone. Fortunately, the staging focuses on him alone, and at this point is vividly dramatic.

Semyon Bychkov is rarely less than good,  and the Royal Opera House orchestra plays with verve and just the right amount of sour dissonance. Bassons and low winds snarl, commenting on meanings not borne through in the staging. Bychkov, who is usually more refined,  goes for volume when more sublety might be more effective. I longed for Christian Thielemann in Salzburg (more here) , who made the orchestra sing, so orchestra, voice and meaning were fully integrated. In a Big Bang production like Guth's, noisiness is perhaps a virtue.

Emily Magee sang The Empress and Elena Pankratova sang the Dyer's Wife. Magee is popular, but in this production, the role was so ill-defined that she was eclipsed by the goings-on around her. It didn't help that she and Pankratova were costumed alike. The roles are mirror images of each other  but the staging was confusing. Pankratova rang out with passionate intensity, creating the desolation in the character by voice alone. In Warlikowski's Die Frau ohne Schatten for Munich (read more here) she smouldered with sexual frustration. Guth downplays her abilities, just as the Nurse suffocates the Empress.  Johan Reuter sang Barak, with many good moments and a few lost notes, but effective enough. I wonder how much effort went into rehearsing the singers in character, when so much attention was paid to the animals ? In theory,this is a great cast, all well experienced.What wonders might there have been ?