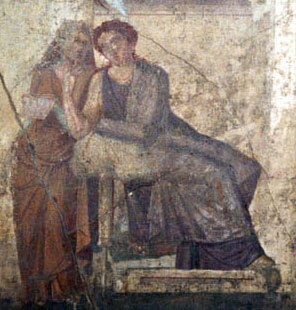 Maze-like, recurring patterns, mirror images. Benjamin Britten wrote his Phaedra towards the end of his life. The orchestration is bizarre. It's scored for percussion and harpsichord, with small string ensemble and soprano, Its textures are stark and stylized, with the directness of Greek or Roman art: no fancy background decoration. The picture shows the fresco in Pompeii showing Phaedra telling her secret.

Percussion and harpsichord? The timpani and metallic instruments add a raw edge, militaristic perhaps, or maybe ceremonial. Phaedra, after all, is a queen and she takes her regal responsibilities seriously. Britten's cycle feels like state treason, (which of course it is). Against the grim percussion, the harpsichord struggles, the thinness of its tone perfectly portrays Phaedra's vulnerability. Harpsichords are percussion instruments too, and Britten makes no pretence at writing anything harmonic or baroque.

Britten's nine songs evolve like tableaux, each a stage in Phaedra's journey from her wedding day to her death. Phaedra's feelings are not love, but a curse. "I faced my flaming executioner Aprodite, my mother's murderer". Phaedra's mother was Pasiphaë, who slept with the bull and died giving birth to The Minotaur.

Britten sets the vocal part in a combination of long, soaring arcs and short staccato interspersed with tense silence. "I could not breath or speak", she sings , describing the compulsion that overwhelms her. She rasps, "Love. Love. Love" heavy and hollow like ostinato, against wildly turbulent, twisting discords, marked by high, screaming strings. "Alone" she suddenly shouts : no adornment, no softening. Indeed, by this stage words are bursting out almost randomly, without any attempt to civilize feelings into conventional form.

"Death to the unhappy is no catastrophe" she intones. At last the strings rise in a sort of elegaic anthem, almost recognizably melodic, but quickly surge into a whirring, rushing torrent. "Chills already dark along by boiling veins" Phaedra faces death heroically. In the end, a solo cello plays a sweet, lyrical passage : Phaedra is no more.

The parallels between Britten's Phaedra and Henze's are clear. This was one of Britten's last works, written when he was entering his final illness. Henze almost didn't survive. Henze even incorporates Britten's cello part into his opera, a deliberate reference to Britten, whom he admired. Henze's music for Phaedra also references Britten's spartan tension, in contrast to the often lyrical lines Hippolytus is given. This fits the myth, for Phaedra is not driven by ordinary mortal lust. Her love is sterile. Britten's Phaedra, compressed into just over 20 minutes, is uncommonly dramatic, but it would be a mistake, I think, to treat it like opera. Britten wasn't emotionally effusive, preferring to cloak feelings obliquely, behind masks. Often Greek figures are seen sideways, not face forward. Confronting his own impending death, Britten responds to Phaedra's no-nonsense determination.

But Henze's hero is Hippolytus. In Henze's Phaedra, the dynamic revolves around the male figures, not the women. That's why Artemis is cast for countertenor, not soprano. She/he is supposed to be sexually ambiguous. Similarly, the Minotaur is both man and beast, both dead and resurrected. As is Hippolytus, who may be put back together, but cannot be himself again. The other male presence is Theseus. he doesn't appear but he's implicitly present as it was he who killed the Minotaur. Now the Minotaur comes back and kills his son. And of course, the Minotaur is Phaedra's half brother.

Such twists and turns in the narrative reflect Henze's central image of the Labyrinth. The whole opera is like a complex, intricate maze with shifts of direction, dead ends and new openings. Henze builds clues in so cryptically that they are almost meant to elude. And, like any good maze, Phaedra is designed to mislead, even though it's elegantly and meticulously constructed. Again, perhaps this is the influence of Britten, on a deep psychological level. Britten used Robert Lowell's translation of Racine's translation from the Greek. The narrative has gone through many permutations, so literal meaning is less important than intuiting the symbols. Henze's Phaedra grew out of Henze's ideas, the text (Christian Lehnert) following and illustrating, as opposed to conventional operatic word setting.

Henze's Phaedra functions much as a Greek frieze, where protagonists are seen in stylized poses. They don't speak. Even the myths they appear in change with different versions. Meaning is fluid, dependent on the observer's intuition. The clues are not in words, but in form. In this way, Henze is right in the vanguard of the modern. So much of the publicity around him would portray him as a new Rossini, an alternative to the avant garde. That silly either/or dichotomy that divides music into modern/not modern clichés is self-defeating. In many ways. I'm relieved that Phaedra confounds, because it's meant to confound. Like a Labyrinth !

Coming up next : Weimar movies. (of which there are several on this site for full downlaod.) PLENTY of Henze on this site, look at the labels on right. I'll be doing Six Songs From the Arabian next.
at January 23, 2010