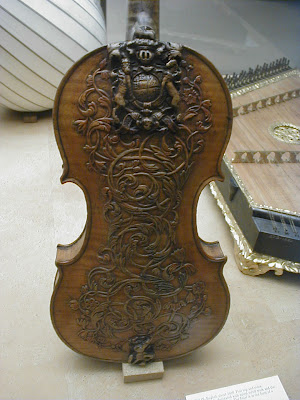 In any museum, what's on display is only a small fraction of what's in storage. One of the great things about the V&A collections is that they've been available for research : some objects need to be studied in much greater detail than possible in a glass case. The Music Gallery at the V&A has been open mainly by appointment for some time, and the general public doesn't know what it's missing. So in theory, it's a good idea to shift music out of central London to the Horniman Museum way out in SE23.

The Horniman holds by far the biggest collection of musical instruments in the country, so it makes sense to concentrate resources in one place where specialist curators can care for them. Violins, for example, need to be played to stay "alive". In Berlin at the musical instruments museum next to the Philharmonie there are dedicted staff whose job is to tune and play magnificent instruments, the like of which most performers can only dream of. In Oxford, at the Ashmolean, there's the famous "Messiah" Stradivarius, so named because it was kept as a curio, so its sound may or may not have come.

But why should museum pieces be treated as museum pieces? Serious music scholars would head for the Horniman anyway. But what about ordinary people? The warm veneers on these instruments are sensual and tactile for they were made to entice a player to give of his best. Many are richly ornamented with inlays of ivory, exotic woods, and gildings of gold. As design concepts, they're formidable too. How does a master craftsman turn a flat plank of wood into something so beautifully curved that it resonates with a distinctive, individual personality of its own? Often the simpler, plainer instruments have the best sound because effort goes into making them fulfil their purpose as vehicles for music rather than rich men's toys. Indeed, there's a concept that the ideal design combines form and function. Many other objects in the V&A collections don't, thanks to taste in the Victorian age when the museum was founded.

Musical instruments don't reveal their beauties to ordinary eyes. Howe many people know how the 18th century hurdy-gurdies at the V&A should sound? Or why early violins and violas have 20 or more strings, some of which aren't played but exist to add resonance? And how did keyboards evolve, responding to and influencing musical invention ? Even people who don't listen to music can get inspired if they realize what wonders of engineering these instruments can be.

The past isn't musty or dusty. There are human stories behind these instruments, which can tell us about our past. England was once a major centre for viols and guitars, so these objects illustrate the historic trade between England and Iberia. What's more, because instruments serve a purpose, they're constantly being developed to improve the music they can make. "Industrial" design before the term was created.

Perhaps most of the tourists who go to the V&A only want to see famous things with an inbuilt Wow factor. Musical instruments are never going to have the appeal of Tipoo Sultan's tiger devouring an Englishman, or the rooms of Italian marble sculpture, or even Samurai armour. But they are an important part of our heritage, nonetheless, and particularly of a design heritage which isn't confined to music or musicians.

More so, perhaps than even the Theatre and Performance galleries, which are interesting, but by nature, contain emphemera like playbills etc. which were never meant to be art

Once there used to be a gallery of ironwork at the V&A. I haven't looked for it for years but it was a striking, if unsexy collection. Things like that get pushed aside by the need to raise visitor numbers and make museums palatable to sightseers and daytrippers. Even at the Ashmolean in Oxford, the wonderful refurbishment is marred if you know that many of the great items have been relegated to storerooms. All museums hold more than they display, for good reasons, but the general trend towards "visitor friendly" is becoming too narrowly interpreted. Ultimately, a museum is a place of wonder and mystery, not just a backdrop for other acrivities.

The magic of the V&A, and the Ashmolean, the Pitt Rivers, and the British Museum is the thrill of discovering things you don't know. The Horniman will be a magnet for music people, but it won't draw the ordinary visitor who doesn't know what wonders may exist. "I don't want to spend a day looking at old pianos!" Perfectly valid observation. But old pianos, and old string and wind instruments and oddball items like glass harmonicas, can be fascinating if presented well.

There will still be music at the V&A as some items are being retained, but they'll be shown in the context of other collections, for example baroque artefacts.

PLEASE see what I've written abut the V&A Baroque Magnificence Exhibition HERE (and related posts), and the Sacred Made Real Exhibition HERE at the National Gallery (the show's still on). Although this is primarily a music site, there's lots on visual arts and design. Including Baroque in China and Japan. And HERE is the Ashmolean article.
at January 15, 2010