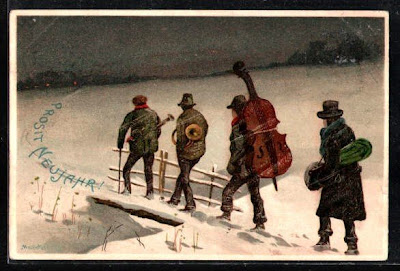 How could anyone do that to a poor cello (or bass)? By the time they get where they want to go, the poor thing will fill up with sleet.

Sixteen inches (40 cm) snow forecast chez moi tonight and I can well believe it - it's snowed non stop all evening. This is the heaviest snow I've ever seen this far south, and they're saying the heaviest falls in 50 years.

Yet until mid-December, it was unseasonally warm. There were roses, daisies, clematis, even a fuchsia and a delphinium in my garden until 17th December. No frost at all until then, so the plants were confused. So we can't really complain. Worse things happen in Siberia! In Beijing, they're having the biggest snowfall since 1950, and even sunny L'Ile de Maurice is wet and cool (look at that luscious pic of the jungle).

So I thought, maybe celebrate the rare occasion with songs about snow? Lots from Finland of course and Schubert's beautiful Der Winterabend, even Hans Abrahamsen's Schnee or Simon Holt's Witness to a Snow Miracle (no recording alas) But on the other hand one of the good things about snow is the way it blanks out extraneous noise. The silence snow imposes can be very beautiful, turning you in onto your soul, very zen.

In practice, most of us have to get about busy lives and snow stops that. I want to go to the Wigmore Hall tomorrow for Juliane Banse and András Schiff but no way will my car oblige, even though it was born in Bavaria.

But think of those who don't have a choice in this weather. Think of postmen and deliverymen, pieceworkers or repairmen. No work, no pay. Or old people who can't afford heating or get out to buy food? Or street sleepers? It is nonsense that this recession is "over". That's what they said in 1931 when the stock market seemed to pick up. But the Depression didn't kick in until later and it a took a war to end. This time, there aren't soup kitchens because poverty is masked. People simply don't register unemployed because the system isn't designed to help, but to humiliate. These are the people who keep trying, against the odds, the very ones who deserve support, and they don't get respect.

Sure there are crooks who rip off the system. Many of them occupy the House of Lords. But lots of good people are quietly going under and no-one notices. Please read THIS article. There are a lot more like this man around who deserve better than what's happening. Behind statistics, there are real people. And many of them have got there because they resisted becoming "statistics" in the system. My new year wish is that something good will happen for him. This Depression won't end until they fix the fundamentals.

So I might do Schubert or Sibelius or even a movie download for those trapped indoors. Or I might go out and enjoy a genuinely silent, traffic-free night. There used to be lots of birds here, once, even a deafening dawn chorus, but no more. Climate change is real, the snow is a blip. Indeed, they say global warming will flip the Gulf Stream which keeps London from being as cold as Moscow. They're on the same latitude. But maybe, with my luck, if I buy a hat and a pair of boots, the snow will stop so I'll get to use them.

Minus 14 here , complete whiteout, can't get up the street far less into town. But friends say the Banse/Schiff concert was wonderful, well worth it and ended at 10!!!
at January 06, 2010