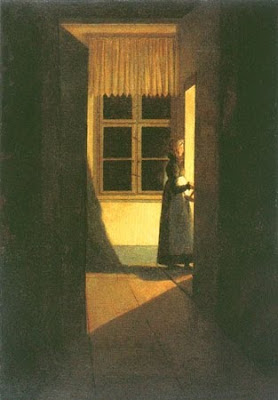 Es ist so still, so heimlich am mich....wie schnell nun heran der Abend graut! Mir ist es recht, sonnst ist mir's so laut. (It's so still, enfolding me like a secret...how quickly the night draws in! That suits me better than loud noise.)

The sounds of the city dim, the blacksmiths stop hammering, and passing carts stop rattling. The poet is happy to be sitting in the darkness, completely alone. How steady and quiet the piano part is, like heavy snowfall, muffling the sounds of the city. How good to be rid of harsh sounds like "dass nicht rass'le", mechanical sounds now no more.

Quietly, gently, moonlight creeps into the room. Er kennt mich schön und laßt mich schweigen. Nimmt nur sein Arbeit, die Spindel, das Gold....und hängt dann sein schimmerndes Schelieiertuch tingsum an Geräth und Wänden aus. It knows who I am without asking, and lets me stay still. It quietly takes up its spinning wheel, weaving a veil over the furniture and walls. It's a discreet presence that doesn't demand, doesn't stir and moves of its own will.

Denke zurück ach weit, gar weit! The pace subtly speeds, almost impatient. Think back, ah, long long ago,to a beautiful but now vanished time. Denk an Sie, an das Glück des Minne. The poet is thinking about someone who once brought him happiness and love. Seufze still und sinne, und sinne! He sighs, pondering feelings that are pouring back, like moonlight. And so the last word Sinne repeats, tenderly, as if the protagonist wants to savour it longer.

So this isn't some romantic snowy landscape, it's an industrial town, and the action takes place in a domestic interior, enclosed, "heimlich", private. The poet needs solitude for it's then he can contemplate the moonbeams and think of someone who long ago lit up his own life like a golden veil. So I've picked this mysterious and relatively little known painting by Caspar David Friedrich, which shows a woman quietly moving past a window, holding a candle. Like the woman the poet's thinking about, she's not quite real, but elusive, like a memory that can't be trapped but lives on in quiet contemplation. How modern the painting is, with its odd angles and shadows !

Schubert set Der Winterabend (D938) iin 1828. I'm not sure when the poet Karl Gottfried von Leitner wrote it but both of them were relatively young men, Schubert only 3 years older than Leitner (who lived to 1890). The mood of this song is gentle, unhurried, unneurotic but deeply felt.

My all-time favourite recording is Matthias Goerne because he sings it with such graceful warmth. Rather like he's moonlight too, warming and lighting up what's clearly a dark , chilly room. Just as the furniture is transformed by the moonlight, Goerne infuses the text with tenderness and elusive feeling. This isn't a song for big bluster declamation: Goerne sings softly, but firmly, and you feel that as long as someone can care so deeply, the happiness of love will never be lost.

It's on Sensucht, the first volume of the Deutsche Grammophon Schubert Edition. Goerne's accompanied by Elisabeth Leonskaja. Read about it HERE. It's an ambitious project -- no less than a complete traverse of Schubert's songs for low male voice. Each release is arranged around a mood. Since Goerne is working with top pianists with whom he's been closely connected, each set is beautiful personal and intimate. This makes it different from some compilations, like chronological ones, or those collated from single performances or from different recordings. Each one's a kind of statement of what the art can do. DG isn't making a big marketing bonanza of this series, going instead for quality, subtlety and class. It's something that those in the know will seek out rather than have it thrust down their throats. Rather like the moonlight apparition in Der Winterabend! Lieder isn't a mass-market genre geared to quick thrills, but this series is, I think, essential for those seriously interested in Schubert and intelligent, thoughtful and genuinely felt Lieder.

Complete text HERE Both in German and English. There are thousands of song texts on Emily Ezust's site. Anyone with a CD or score of course has the famous ones but this site is THE BEST for less well known songs, and uncommon languages. Accept no imitations and support it generously as it's a project of love. It's been going 15 years or so, a wonderful contribution to the song world.
at January 07, 2010