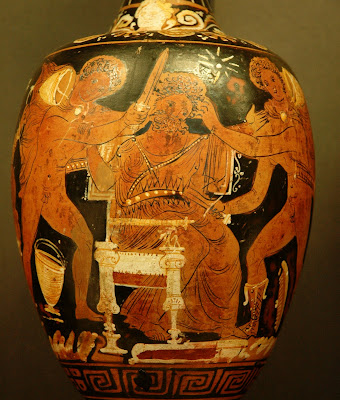 "Valery Gergiev slows the tempo" goes a headline in the Times, announcing that Gergiev wants to cut down from a hyper-maniac to a merely maniac schedule. Is Gergiev kidding? Even when he's agonizingly horrible, he's never timid.

Strauss's Elektra could bring out the best or worst in Gergiev. What a plot! Murder, vengeance, family dysfunction and more than a hint of kinky sex. Plenty of scope for extreme exaggeration. Yet Strauss leavens the madness with oddly lyrical passages. Elektra sacrifices herself in delirium, but echoes of dance run through the opera like an underground river. They're easily lost beneath the volcano erupting above, but Strauss puts them there for a reason. Pastoral memories? Or perhaps reminders that the rhythm of life doesn't have to be as madly self-destructive as Greek tragedy? (an observation typical of Richard Strauss).

On this first of two performances, at the Barbican with the London Symphony Orchestra, it was surprising how Gergiev focused on Elektra's elusive, lyrical moments. One might have expected him to disregard them in favour of the more obvious Expressionist extremes. Maybe he was out to confound, or even trying to prove he can do watercolour as well as technicolour. Maybe it's even a throwback from the ballets he's conducted. But the main thing is that he was aware that these gentler moments are there for a purpose. When the recording is finally mastered, using both performances, the end result will be interesting.

Although this was a concert performance, Jeanne-Michèle Charbonnet extended her vocal portrayal with stylized body spasms, angular and twisted like Elektra's tortured soul. She expressed the spirit of this Elektra, informed as it is by Gergiev's appreciation of the role of dance. This role is an extremely demanding tour-de-force for any singer. If Charbonnet's voice didn't always carry over the large orchestra, that can be overcome when the sound is mixed. In normal opera stagings, there's more distance between singer and orchestra, so Charbonnet was struggling against overwhelming odds.

Also surprising was the way Matthias Goerne created Orestes as a believeable personality. In the opera, Orestes doesn't have all that much to sing, and he's easily eclipsed by the high dramatics around him. He's come back after all, to take revenge. Goerne's few minutes on stage were projected dark, brooding power. With Agamemnom and Clytemnestra for parents and a virago like Elektra for a sister, Orestes is hardly going to be a a wimp. He may be a man of few words, but he's pivotally important. Listen to the orchestration around his part, it's singularly forceful. Murmuring bassoons, eerie harps : foreboding. Orestes emerges from the shadows. It's Orestes, after all, who exacts the bloody revenge Elektra longs for. Goerne is luxury casting for a relatively small role, but the gamble has paid off handsomely: at last an Orestes that matches Elektra in power and intensity! Strauss shoiws us in his music what the libretto doesn't tell us. In the original saga, Orestes is doomed, cursed by the murder he's about to commit, and will end up mad with guilt. Not a happy part.

Angela Denoke was Chrysothemis , suitably well mannered, and Felicity Palmer was a fairly benign Clyemnestra. Ian Storey's Aegisthus had clout. But the group of Russian singers as the maids were very impressive. In fully staged opera performances, the big stars get attention because the action moves round them. In concert performances individual singers get a chance to shine out, even if their roles are minor. Olga Legkova sang the First Maid, a part so small it's often immersed, but she made it distinctive. That's stage presence! Vuyani Mlinde was a Jette Parker Young Artist. Hearing him as Orestes's companion, you know why he's now been taken on by Oper Frankfurt.
Please seee my other posts on Strausss Elektra by labels or HERE and HERE
at January 13, 2010