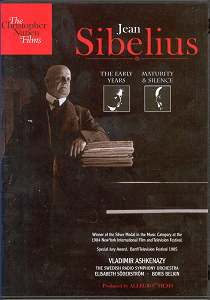 Most music documentaries are bland things, but Christopher Nupen's films are on an altogether more complex level. They probe deeply into the very nature of creativity, into the influences that shape each individual artist. Nupen himself is a musician, so these films are unusually well informed musically. Unlike most documentaries, Jean Sibelius is something you can watch over and over and still get pleasure from. This is a work of art in itself, a poetic elegy that penetrates more perceptively yhan mere words can ever do. It's being broadcast in two parts on BBCTV4 (also available online) on Friday 22 and 29 January.

It's exquisitely beautiful. There are scenes which at first seem like abstract studies in black and white: then they reveal trees, rivers, clouds. This is nature's own chiaroscuro, not simple monotone, but myriad gradations of colour, form and texture. Nature filmed in this way is like a symphony : complex and nuanced, yet ordered. What seems still, like snow, teems with particles and movement.

In one powerful image, a 1930’s car drives out of the forest, its lights preceding it ominously. There are panoramic shots of the lakes of Karelia, dotted with islands and swathed in mist. Horizons melt into sea, the sky laden with frozen fog. Sometimes the images are close-ups of water, intangible yet evocative. Like music.

Because film can express unspoken ideas, through opaque images, it is particularly sensitive about intangibles, such as Sibelius’s crises of confidence. It mentions obvious causes of anxiety such as debts and alcoholism, but hints at something more complex. It was the very fertility of his imagination that propelled him towards new ideas. The greater his aims, though, the greater his self-criticism. Earlier works like Kullervo were suppressed, and the Violin Concerto did not achieve quite the heights he had hoped for. His hopes for the Eighth Symphony were high. "It is going to be wonderful … what I am doing in this symphony only a few people in the world can know". Although it reached the printers, Sibelius withdrew it: it ended up in the bonfire in the oven at Ainola. Perhaps that was Sibelius's curse: he could imagine music so wonderful it wasn't possible for anyone to notate it properly. The more he imagined such music, the more frustrated he became.

Interspersed with the wonderful landscapes are performances of Sibelius's music, some made specially for the film. There's also archive footage of Sibelius himself in one of his final moments of public glory, when he came out of seclusion to conduct the Andante Festivo in 1939, being broadcast to the United States. Finbland was under threat from Russia, and Sibelius knew he had to get support from the Am,erican public. The intensity of this performance reflects the darker side of his success. Sibelius knew that the world expected him to represent Finland for much more than music, and it placed him under even greater pressure.

But what made Sibelius a composer in the first place? His childhood dream was to play the violin. Yet by the age of 10 he’d already composed a piece called “waterdrops” for violin and cello. Towards the end of his life, he confided in his diary “I dreamed I was twelve years old again, and a virtuoso”. It's sensitive details like this that make these films so good.

Like a poem, this film speaks obliquely through subtle, indirect images. It is breathtakingly atmospheric, capturing the spirit of Sibelius’s music and motivations by implication rather than direct comment. For me, the most haunting image is of Elisabeth Söderström, singing the song, “Since then I have questioned no further”. In a strikingly spare and dignified way, Sibelius sets Runeberg’s understated lines

“ Why is Spring so quickly over, why must summer flee so soon ?
Thus I used to wonder often, and my mind could find no answer…..
Since then I have questioned no further, while my heart fills with sorrow at the passing of beauty, at the fickleness of fortune”.

It expresses so much, beyond the mere words. At the very end of the two films, it is played again, wordlessly, on solo piano.
at January 21, 2010

Thanks for posting! Would love to see this but I don't get BBCTV4. But no matter: Your post was a good reminder to go and select my iPod's "Late Romantic" playlist and enjoy one of my very favorite pieces of music, Sibelius's Violin Concerto. Can't decide whether I like the 1st or 2nd movement better; chromatic beauty either way.
All the best,
Michael

Hi MIchael ! I quite like the V c but so much else to listen to. Get the DVD of this movie, . Most DVDs you never want to see again but this one is a keeper.